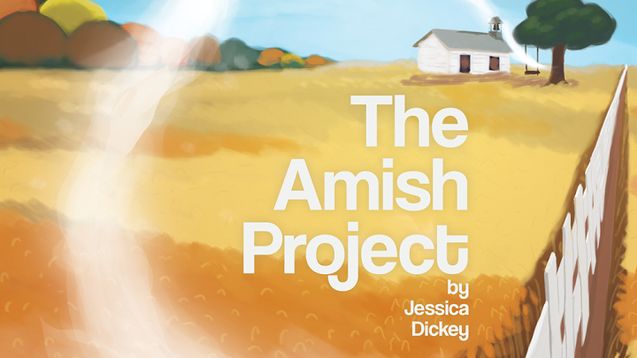 The idea was first mentioned by director Emily Wetzel. She told the stage managers and professor Debra Freeberg that she wished they could extend the show, without any plans to actually do so. The students involved with the production, however, quickly took to the idea. They called a meeting and unanimously agreed to bring the show back for one night.

“The cast felt that because the message of the show was so well-received last weekend, it would be beneficial to put on an encore performance,” said sophomore Lexi Viegas, who plays Carol Stuckey.

Even still, the idea to bring “The Amish Project” back was a last minute decision. The student meeting was held on Monday, Feb. 5. The announcement went out the next day, with the production only made possible because of the support of the Calvin box office, campus event services and the physical plant.

“The Amish Project” originally ran from Feb. 1-3. Each individual show was sold out, even with additional chairs being added to the theater. Wetzel and the crew knew that there were still people who wanted to see the show but were unable to get a ticket, which was one of the motivating factors to schedule an encore performance.

“Part of my role is to foster arts collaborations and connections campus-wide — the arts are for everyone, and the arts are a vibrant part of the fabric that is Calvin College. Deciding to put on an encore production speaks to that truth,” said Art Programming Coordinator Paula Manni.

The show, which is set in 2006 Pennsylvania, is about an Amish community attempting to recover after a gunman tragically took the lives of five schoolchildren.

“It’s a story of forgiveness, and there’s real healing in forgiveness,” Wetzel said. “One of the things I’ve learned through this process is that forgiveness is personal and different for everyone. Even though we’re all on our own forgiveness journeys, we’re all going through it together.”

The encore presentation of “The Amish Project” is showing on Saturday, Feb. 10, at 7:30 p.m. in the Lab Theatre. Tickets are still available at the box office or at the door and cost $5 for general admission.