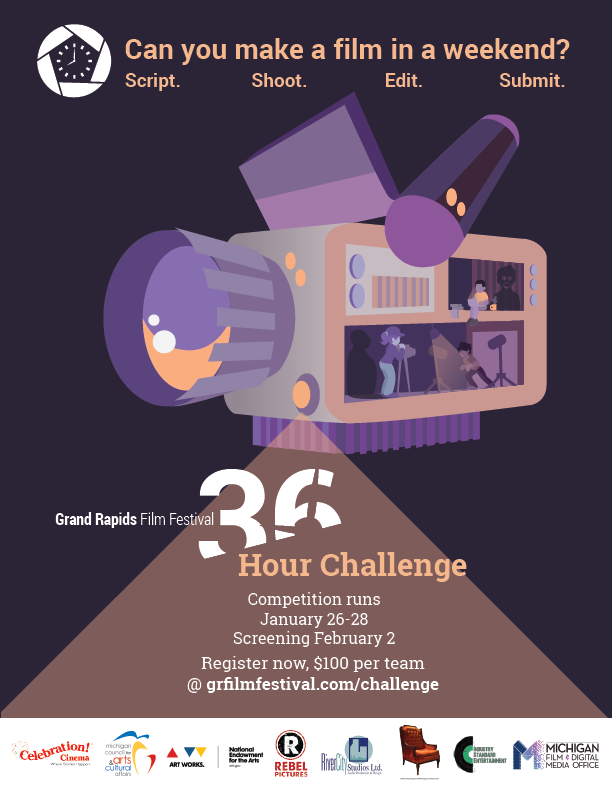 Promotional material for The 36-Hour Challenge from www.grfilmfestival.com

Two groups of students from Calvin participated in the 36 Hour Challenge, held by the Grand Rapids Film Festival, with one of them winning the award for Best University Film.

The 36 Hour Challenge gives up-and-coming filmmakers in the Grand Rapids area a chance to show off their skills to a wider audience. On Jan. 26-28, the contestants were given 36 hours to complete a six-minute short film. Filmmakers must script, shoot, edit and submit their films, while adhering to a certain theme and necessary elements, within the time limit.

After completion, 20 out of the 25 films were screened at Celebration! Cinema North on Feb. 2. Filmmakers varied within age — three of the teams from high schools, nine from colleges and eight professionals.

“Making a six minute short in 36 hours is one of the most difficult challenges we could have given you,” Jennifer Shaneberger, president and CEO of the Grand Rapids Film Festival, said prior to the screening. “I feel like a lot of you just nailed it. Some of you made me laugh. One of you made me cry.”

Both of the groups from Calvin who entered the challenge had their films screened.

Seniors Moses Kabandana, Samuel Bushi and Shun Chan Bae, and junior Ha Jin Kim composed the team Reel Knights. They titled their film “Paint That.” Starring Bushi, the film is about a man who puts on several masks in order to hide his identity, only to eventually realize that it’s better to embrace his real personality.

“We wanted to make it because we thought it would be a fun and good experience for the four of us,” Kim said. “The show was a lot of fun.”

“We all sat down in a circle for about an hour,” Mutesa said. “We pitched, maybe, seven ideas and one of them stuck. It was real fun shooting it and writing the script, right up until the end.”

Following the screening, a celebration and awards ceremony was held. The films were voted on by a panel of judges and the audience. Golden Shooters ended up taking home Best University and Best Acting for Mutesa. The prizes, presented by the Michigan Film & Digital Media Office, totaled $1,200, with Best University receiving $400. Scholarships for the high school teams were also awarded.