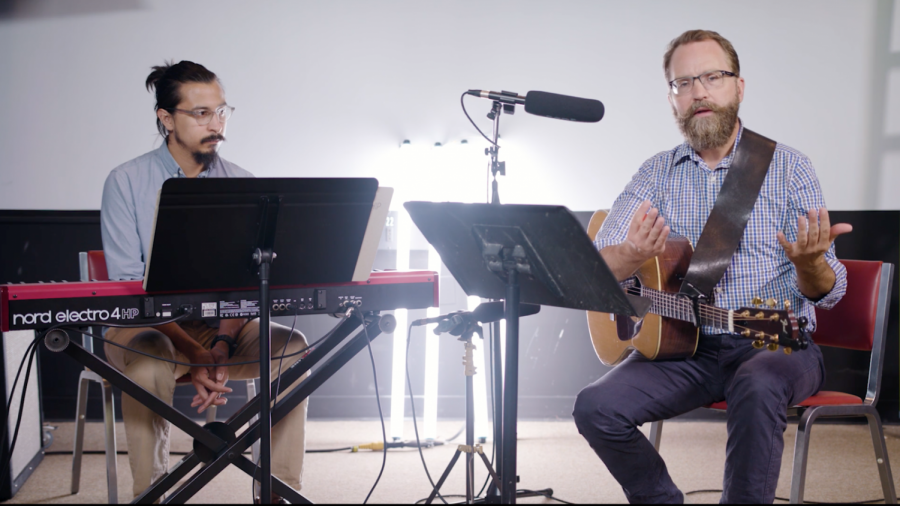 Under the direction of Greg Scheer, a music associate for the Calvin Institute of Christian Worship (CICW), a new video series has been added to CICW’s vast array of resources. “Renewed: Worship songs to refresh your church’s voice” is CICW’s response to the dramatic shift in many churches away from hymnals — denominationally-chosen collections of songs—   in their worship planning process. Churches would use these hymnals as their main worship planning resource, finding songs, psalms and prayers in the book.

“Worship planning in the Christian church looks quite different today than it was fifty years ago. In the past, each denomination would have their own hymnal,” Scheer said. There was a Christian Reformed hymnal, a Reformed Church of America hymnal and a Baptist hymnal. However, Scheer pointed out that this is no longer the case in the majority of American churches.

Scheer serves on the worship team at Comunidad Cristiana de Grand Rapids, a local Spanish-speaking church led by Pastor Rodrigo Cano. Here, instead of using a hymnal, Cano and his team simply use YouTube to find and share music for worship planning. This shift led Scheer and CICW to pursue creating quality online content.

This new video series began by featuring a re-tuned hymn by Bruce Benedict and Ray Mills, “Come, Holy Ghost / Be Not Afraid.” Re-tuned hymns take the theologically rich text of a hymn and set it to new music, often with the intent of creating “ancient-modern” music. A notable example of this purpose is “Come, Holy Ghost,” an eighth century German text combined with a new tune and refrain from 21st century Indianapolis.

As the subtitle suggests, this series aims to “refresh your church’s voice.” Scheer holds to this goal by explaining the history of the songs featured and how they can be used in worship. Further, he puts concentrated emphasis on the congregation and how to serve them effectively in worship,  an important responsibility for any worship leader. Scheer plans to make this clear in all of the videos as the series progresses.

Another aim of this series is to introduce worship leaders to blended worship, global worship and the vast array of styles available to them.

“My hope is that the videos will not only teach songs, but also teach a sensibility about worship that encourages church musicians to embrace a wide range of quality songs,” said Scheer.

More recent installations in the project include Lois Farley Shuford’s “Ready My Heart,” and on Wednesday a discussion on Wendell Kimbrough’s rendition of “Mary’s Song (Our King of Peace” was added. In the future, music from many other artists, including global worship songs, will be posted.

If students are interested in learning more, they can view the video series and many other worship resources on the CICW’s webiste, https://worship.calvin.edu/, under the Resources: Audio & Video tab. They can also contact Greg Scheer directly at [email protected].