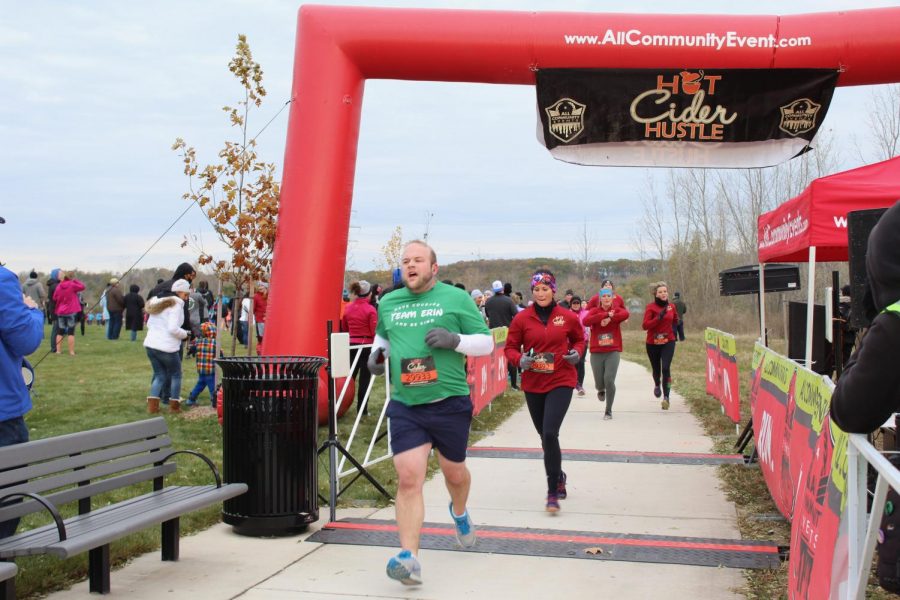 Athletes began arriving at Millennium Park in Grand Rapids at 7:45 a.m. Dressed in running leggings, gloves, head-warmers and lots of layers, these determined people braved the 27-degree weather to run the Hot Cider Hustle 5K. The race was hosted by All Community Events, from 9 a.m to 11 a.m on November, Saturday 11. Runners had the opportunity to run for a cause and raise money for the event charity, the Humane Society of West Michigan, which rescues animals and finds them homes.

1,426 participants, including several Calvin students, walked or ran the 3.1 mile course. To keep to a consistent pace, runners were asked to line up at the start line according to markers of which mile-time they intended to keep pace at.The start line offered mile times going from a six-minute-mile marker to an eleven-minute-mile marker. The closer runners were to the starting line, the faster the set mile-marker pace.

An electronic signal in their running bibs kept each runner’s individual time. The bibs began recording once the runners crossed the starting line and finished recording when the runner crossed the finish line. This allows runners to immediately tell where they placed among the hundreds of athletes. Runners in the first, second and third place of each gender-and-age group all received medals.

While checking in for the race, participants received a ¾ zip fleece sweater. Upon finishing, athletes were given boxed water, a ceramic mug, a caramel apple and, of course, a steaming cup of hot cider.

The unusually cold November morning was a negative factor for Ledford:

“I didn’t run as fast as I would have liked since it was so cold and my friend sprained his ankle… [but] the event allowed me and my friend to set goals and encourage each other to run.”

Lutke thought the 5k was a great opportunity for athleticism and community:

“There’s just something about waking up and doing something productive with your life in the morning instead of sleeping in that really makes the day better… there’s something about sharing in the common pain of running that generates a sense of camaraderie between complete strangers which can bring them together.”

The next large community run will be the Grand Rapids Turkey Trot 5K, which is scheduled for Nov. 23, Thanksgiving Day at 8 a.m.