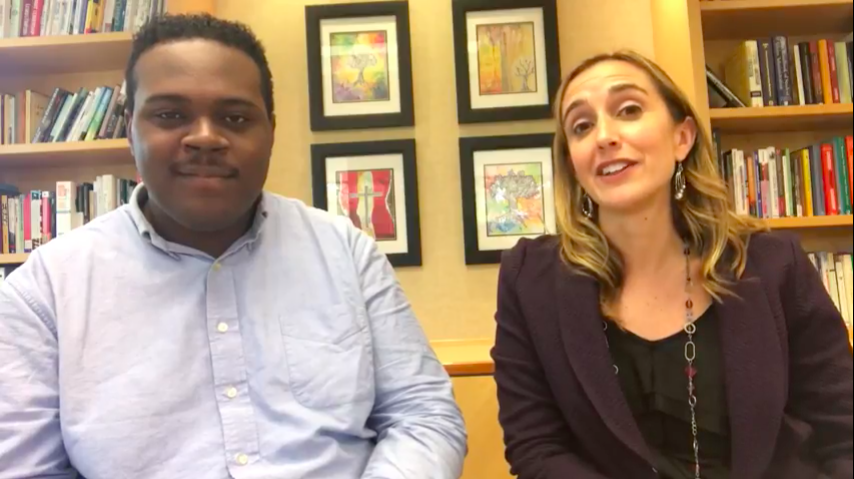 In a video, Sarah Visser and Wesley Brooks invited the Calvin community to join the discussion envisioning Calvin in 2029. Photo courtesy Calvin College.

A panel discussion Monday afternoon considered the role of satellite campuses, online learning and other multi-platform offerings in Calvin’s future.

The event, one of four public Vision 2029 discussions this month, was held in the Prince Conference Center’s Willow Room and was hosted by business professor Jason Stansbury.

Vision 2029 is a year-long initiative to develop a set of long-term goals that Calvin plans to meet through the next two five-year strategic plans.

The panel included Roman Williams, professor of sociology; Lisa Cockrel, director of the Festival of Faith and Writing; David Malone, dean of the library; and Carol Schott, current senior.

“We reached out to [people] that aren’t on the vision team … to try to get more voices in the process,” said Todd Hubers, vice president of people, strategy and technology.

The panel considered several questions, all of which focused on what new programs and platforms Calvin could use to reach a wider population than its current student demographic.

Williams suggested that Calvin could focus more on making educational content available more widely, especially in areas where it has expertise, like integrating faith and learning.

“We should be alarmed when people aren’t asking the question, ‘How do they do that at Calvin?’’ Williams said.

Malone said that, although Calvin has a lot of such content available — from library files to Festival of Faith and Writing archives — it is kept in several different places around campus without any kind of overarching organizational system. And while such systems are readily available, Malone was skeptical over whether staff and faculty would embrace them:

“We as humans don’t like the imposition of the centralizing effects that technology can bring,” Malone said.

Cockrel stressed the importance of making sure that any new program or platform meets a specific need in the populations Calvin hopes to serve. Throughout the discussion, these potential populations included older learners, veterans, full-time workers and people who can’t travel to Grand Rapids.

“What are the felt needs that we are uniquely positioned to meet?” she asked.

Cockrel also pointed to some distinctive characteristics of Calvin that she thinks could be advertised well, such as its identity as a confessional Christian institution that engages in interfaith dialogue.

Many attendees thought the slogan sounded too “corporate,” and Schott suggested “Calvin in context” as an alternative. One audience member, however, spoke in favor of the slogan because it acknowledges Calvin’s need to appeal to students as consumers.

Hubers said that he was encouraged by the attendance at the panel, especially since it was the first one. The audience included several dozen Calvin administrators, faculty, staff, students and alumni.

The vision team hopes to have a draft vision ready to present to the board of trustees in February, Hubers said. They plan on the board approving a final version at their May meeting so that the next strategic plan can be written in the 2018-2019 academic year.

The vision team has launched a forum at calvin.edu/vision-2029 where Calvin community members can discuss the four visioning questions.

Another panel on Calvin potentially becoming a university was held on Thursday, Nov. 9. Future panels on faculty research and Calvin’s Reformed identity will be held on Monday, Nov. 13, and Thursday, Nov. 16 respectively.