CTC brings one thousand and one stories to life 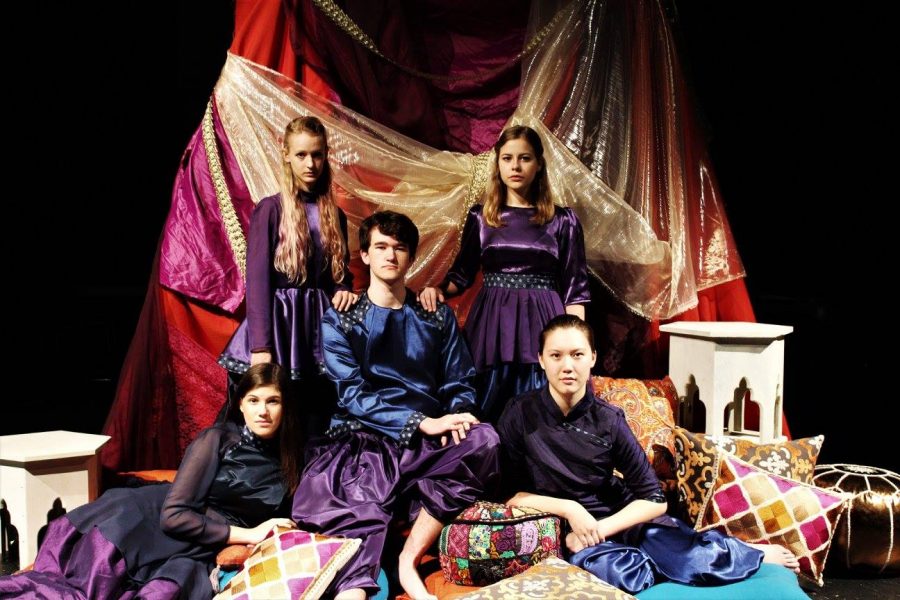 “The Arabian Nights,” performed by the Calvin Theater Company, adapted by Dominic Cooke and directed by Debra L. Freeberg, is currently showing at Calvin college.

In the play, it’s wedding night in the palace of King Shahrayar, played by junior Joshua Ashkinazi. By morning, the new queen — Scheherazade — is to be put to death like the thousand young brides before her. The king executed these brides in a vengeful rage after being betrayed by his first wife. But Scheherazade, played by sophomore Katie Rozendal, is not afraid of dying. She, instead, plans to face death head on and wants to marry the king so she can tell him stories and prevent more girls from being killed.

Scheherazade tells stories about hidden treasure, singing trees, kings, queens and beggars. This play is no ordinary production; actors and directors create a magical world. There was even a live instrumentalist playing on the side of the stage. At times, the stories were serious, while others were funny and simply used to make the king (and the audience) laugh.

“It has been so amazing to see this show come together,” said Rozendal. “The whole process has been a blast. I loved seeing how people used their talents to solve problems that we ran into along the way.”

Walking into the Gezon theater, the set of “The Arabian Nights” came off in a fantastical manner. The theater filled well before the show started on November 3, the second night of the showing.

The show, much like the book “The Arabian Nights: One Thousand and One Nights,” shows stories with a wide variety of themes and morals, including: adventure, greed, hospitality, competition, luck, good fortune and a rise to riches. Each story told by Scheherazade was different and unique, each with a purpose of healing the king’s heart in a different way.

“It was really poetic,” sophomore Elijah Vanderhule said. “The costumes were beautiful, and you could visibly see the King’s demeanor changing as he listened to Scheherazade’s stories.”

Although there are one thousand and one nights in the book, there are not as many stories. Some stories would span several nights at a time while others would be nested, i.e. a story that a character tells who is already in said story. The play isn’t able to cover quite as many, yet it still runs for roughly three hours.

Among the stories, one of them included a tale about a very odd boy who became a court jester.

“The story of the court jester was my favorite,” said Zachariah DeCook, a senior in the audience. “I busted out laughing. The show is beautiful, spectacular. I would say it’s totally worth your time and money.”

“The Arabian Nights” is a show filled with memorable quotes and poetry, fitting to the overall themes of the play such as: “Life without joy is a living death” and “The gates of the king’s heart were locked like a prison, and the halls of the palace were as silent as a tomb.”

“My favorite thing about this play is the beautiful portrayal of the power of storytelling,” Rozendal said. “Scheherazade uses her stories to heal the heart of the king, and it is an amazing transformation to see. I am so proud of this show and what we’ve done with it. Getting on that stage with my best friends and sharing stories with an audience is one of the best feelings. I’ll never get over it.”

“The Arabian Nights” is playing in the Calvin Gezon Auditorium from November 9-11. Tickets cost $5 in advance and $10 at the door with a student ID.