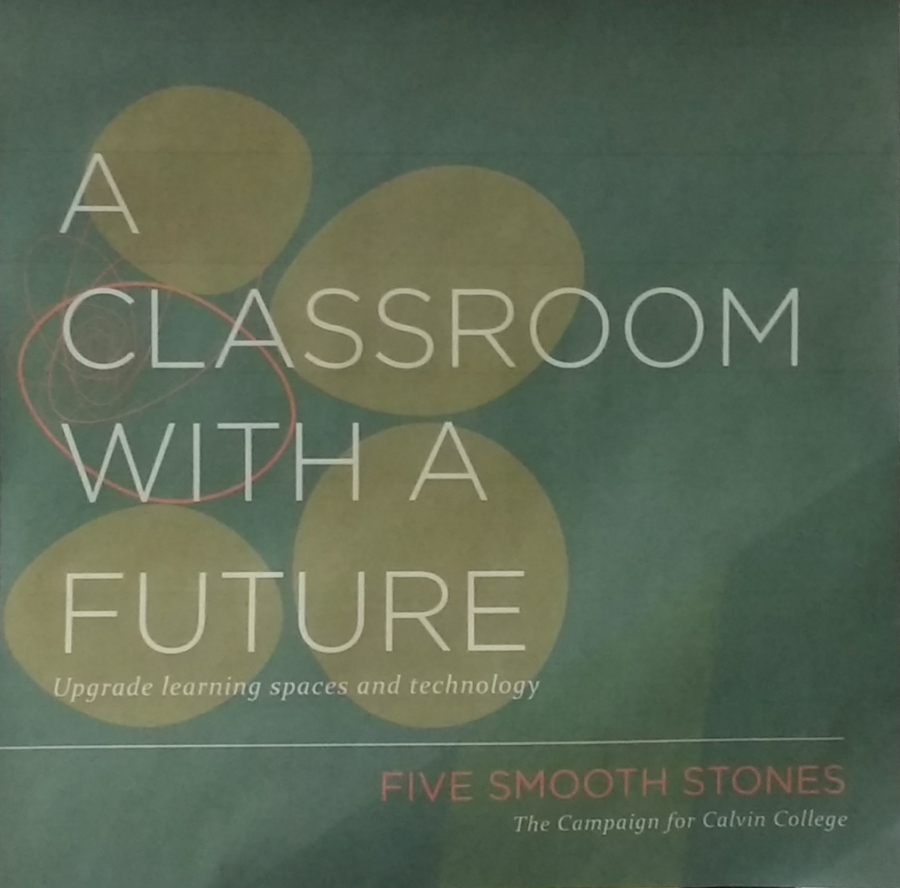 The Classroom with a Future renovations are part of the Five Smooth Stones campaign. Photo courtesy Calvin College.

Calvin has launched the The “Five Smooth Stones” fundraising campaign for improvements and projects on campus to benefit students, faculty and community members. Each “stone” focuses on a certain aspect of Calvin that can be bettered. The five smooth stones are:

A space that inspires: create places to gather and collaborate.

A classroom with a future: offer innovative and technologically advanced classrooms.

Each of these aspects will be incorporated into ideas for bettering the campus and community here at Calvin.

According to the campaign brochure, the inspiration for the name “Five Smooth Stones” comes from 1 Samuel 17:40: “Then he took his staff in his hand, chose five smooth stones from the stream, put them in the pouch of his shepherd’s bag and, with his sling in his hand, approached the Philistine.” This story of David demonstrates how the stones he gathered from the river became the catalyst for his greatness.

Since the start of this campaign in July 2016, 10,687 alumni have contributed financially. Contributions could include gifts to the annual fund, scholarships, capital projects and endowments, according to John Smilde, director of advancement services and campaign director.

In addition, the “Secure Calvin’s Financial Future” theme from the Calvin 2019 Strategic Plan states that for every dollar raised for projects such as these, an additional 25 cents will be raised in order to fund the maintenance and upkeep of the facilities that are funded by Five Smooth Stones. This 125-percent rule helps to ensure that the costs associated with new facilities and improvements do not become added to tuition costs for students.

For now, the timeline of the campaign is not set in place.

Smilde stated the campaign is  currently in its quiet stage. Calvin is talking with major supporters who are passionate about Calvin’s mission. Once sufficient funds are raised, the campaign will transition into a public phase.

This quiet stage of preparing and tweaking the campaign plan will last a minimum of two years while the committee makes changes to the original plan.

Once the quiet stage is complete, a dollar goal will be established as well as a clearer plan for the schedule

“The rule of thumb in campaigns is that the amount raised in the quiet phase should be at least 50 percent of the ultimate campaign goal. We would like to be even higher than that,” said Smilde. “I expect our campaign plan and goals to look a bit different from where they started in a way that makes them better. This is exciting to me.”

The effects of this campaign can already be seen across campus in the newly renovated hallway and classrooms on the third floor of Hiemenga Hall. This renovation is a part of the “classroom for the future” stone.

As the quiet phase transitions into the public phase of the campaign, students, staff and the community wait to see what new and innovative ideas will be brought on campus that will equip the next generation of Calvin College students.