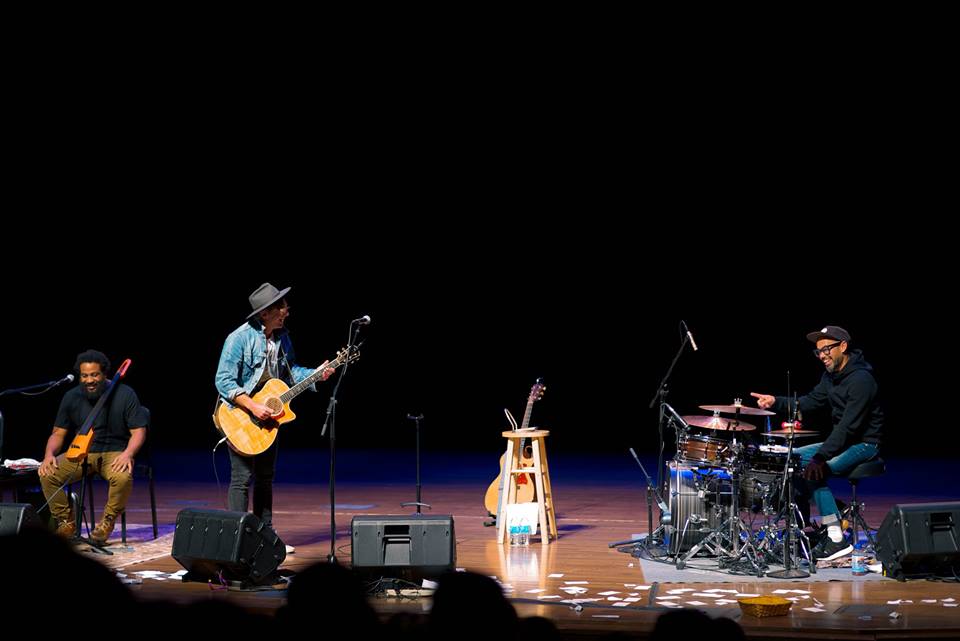 Jon Foreman of Switchfoot performed in the CFAC auditorium this past weekend. Photo by Kendra Larson.

The concert started when Foreman took center stage with his accompaniment on either side and talked a bit about being happy to be back in Grand Rapids. After a brief, droning intro from his cello accompanist, he proceeded to his opening song, “Terminal.” The beginning couple of songs took a similar tone to previous Switchfoot concerts – a couple soft verses with an epic bridge, the kind of music Jon Foreman is typically known for.

Between every song, Foreman took some time to talk to the audience, even accepting requests that were placed on the stage beforehand. Requests included a range of Switchfoot and Jon Foreman originals as well as a song by The Beach Boys. The concert was titled, “An Evening with Jon Foreman,” and every interaction he made and request he took made it feel like just that – an evening hanging out with Jon Foreman. Every time he spoke, it was with a certain calmness. What really pushed the feeling of hanging out with Jon Foreman was his playful modification of the lyrics of Bill Withers’ “Lean on Me,” replacing “call me” with variations like “Snapchat me” and “fax me.”

During the second half of the show, the vibe began to change and the music started to sound different. The songs were more upbeat and unfamiliar, a warm and surprising welcome.

Foreman, despite certain preconceived notions, proved that he has been and continues to be an excellent song-writer. His voice may be growing older just as he does, but even if he struggles to hit some of the notes he used to, his lyrics have remained the rock on which his songs are built. When the two are put together, it creates a sound that continues to point to the most important aspect of his life – his creator.

Foreman is Christian artist, but Switchfoot isn’t a Christian band. His lyrics are religious, but neither his solo career nor Switchfoot suffer from the “Christian” sound that so many Christian bands have. Just because many of his songs have similar sounds doesn’t mean he has nothing left to offer. Foreman offers wisdom and insight to being a Christian in modern society, which is why his music continues to be relevant.