The Center Art Gallery has a long history 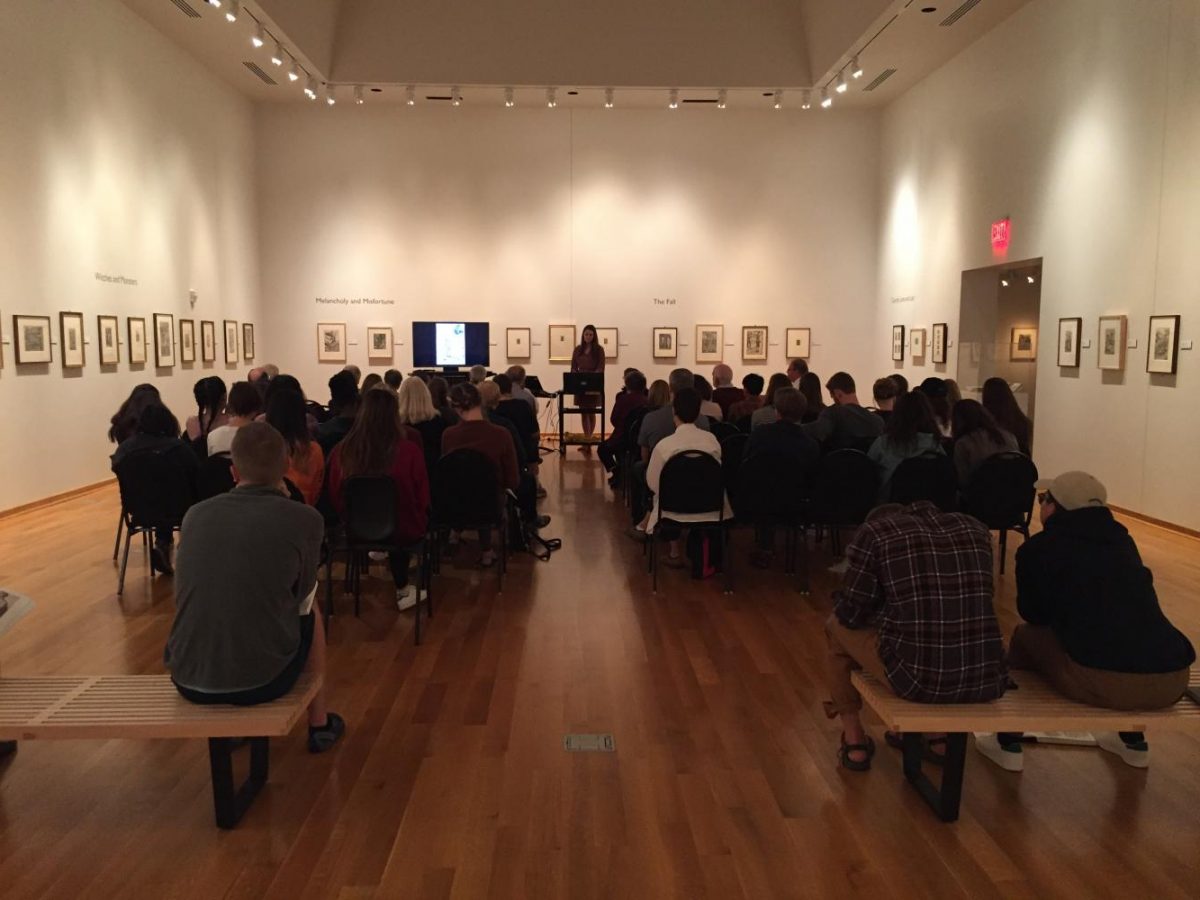 Everyone is at least somewhat aware that the Calvin campus contains an art gallery. Hopefully they know where it is. They might have even gone inside, and looked at the works of art that hang from the white walls, and rest on pedestals scattered around the room. The gallery is bright, and relaxing. A quiet space to go and get lost in the curves of a sculpture or in the strokes of paint on canvas.

But where did all of this art come from? How expansive is the Calvin collection? When did the Center Art Gallery truly begin? Betty Sanderson, the administrative assistant for the gallery. and Paula Manni, the Arts programming assistant, agreed to meet for an interview with Chimes to answer these questions, and others.

Calvin started collecting art in 1922. William Monsma painted a copy of “A Portrait of John Calvin,” the original being by Ary Scheffer, and the work was gifted from the class of 1922. The class of 1926 also gave a painting as their class gift. It was a piece was entitled “Kite Flyers,” by American impressionist from Michigan, Mathias Alten. At this time Calvin was still on the Franklin Campus; there was no gallery to display these works in yet, or even a full art department.

The largest donation came from Garritt Roelofs, who worked in Germany for the Department of Defense after World War II, and participated in the reconstruction of Japan.

“He and his wife collected all kinds of Japanese art, including some really old Japanese prints,” recounted Sanderson. “When he returned to the states, he didn’t know what to do with all this artwork, so he donated it to Calvin College.”  The donation included over a hundred prints.

Then came to move from the Franklin Campus to the Knollcrest Campus. An official art department formed, and art exhibits began to be held in the halls of the second floor of the CFAC. There was still no official gallery, but the art’s role at Calvin was growing.

When the Spoelhof Center building was built (around 1974), the basement was given to the art department and was set aside for a gallery. Due to the original name of the building, College Center, the gallery was named “Center Art Gallery”.

In 1987, the collection was decidedly large enough to need a director, and  Virginia Bullock was hired. She took on the project to catalogue and register all of the art that Calvin now owned, so as to know the extent of the collection. She retired in 1999, and a few directors came and went, none staying very long, until Joel Zwart came in 2003, directing until March of 2017. At the moment Henry Luttikhuizen is the acting director.

Once renovation of the CFAC was completed in 2010, architects suggested that the building should be evened out, by adding a room on the other side of building as the recital hall.

“We were able to jump on that project, the renovation of the CFAC, and that’s how we got [the gallery] to come over to where it is today,” said Sanderson. There had already been some talk about moving the art department to somewhere with more natural light. This new resolution caught the attention of Calvin Alumni and the donations they made helped to make the move happen.

There were two key art donors who inspired the development towards an art gallery. In 2007, Dr. Cornelis Van Nuis donated a collection of 19th century Dutch paintings, with the hope that Calvin would exhibit them. A year later, Dr. Larry and Mary Gerbens found that they could no longer manage their collection of Prodigal Son works, so they too donated their collection.

“They thought that it was really important that the art of Calvin not be packed away in storage, but it should be shared, and exhibited,” commented Sanderson. “Administration was supportive of the idea to get the gallery out of the basement and into a more public space where people who might be coming for a concert or other events could see it.”

At the moment, the Gallery is exhibiting work from the Danna Spaan collection of contemporary art. Spaan is very enthusiastic about the arts and used to be a theater director at Calvin; her donations allow the Gallery to collect contemporary art with the theme of light

Since 1922,the collection has grown to include around 1,900 works. They are rotated every six weeks of the academic year, so that the gallery is in constant flux, always changing with new exhibits and displays.

In addition to the permanent collections, there are rotating exhibitions to feature the works of Calvin students and alumni. The Gallery also partners with the Worship Institute in the month of January, during their symposium to show worship themed works. There is also a large event in the Spring.

“Every May we have the Senior Bachelor of the Arts and Bachelor of the Fine Arts show. It features the work of seniors who graduate with an art or art education major,” said Manni. That work is displayed for the whole month of May.

In addition to the main gallery space found in the CFAC, there are other smaller spaces devoted to exhibitions and studio space. The Raybrook complex, which is more of a studio space for Calvin faculty. The lower Gezon Lobby, where the hangout spaces were turned into a rotating gallery space, partnering with the Calvin Theatre Company. Dialogue uses the space to display their featured art at their release parties.

“Calvin has been involved, exhibition wise, with Art Prize since 2009,” said Manni. “Even though Calvin doesn’t have that downtown gallery space anymore, we still have the Women’s Literary Club downtown, so we exhibit there.”

In addition to the larger portions of collections shown in the Center Art Gallery, there are many of Calvin’s permanent art pieces displayed around campus.

However, this should not be used as an excuse not to visit the actual gallery space. When asked what encouragement they would give to get students to view the gallery, Sanderson and Manni said at the same time, “It’s free!” The gallery is open to everyone; one and all can come to enjoy the quiet, relaxing space.

“It’s a great place to come and get away from the business,” continued Manni. “It’s a quiet space… A great place to just come and enjoy.” Since the art is always being rotated, you don’t have to worry about seeing the same things everytime. The gallery will always be fresh.

“We also tend to do opening receptions and closing receptions with each show that we put on, so that usually involves an artist’s or curator talk. These will usually happen in the gallery or in the recital hall, and there’s free food afterwards,” said Manni. “Often times with our bigger shows we’ll have programming associated with the shows, such as a lecture series or opportunities to participate in drawing workshops. So there are ways to get involved beyond reading the wall text or looking at the art. You can delve in.”