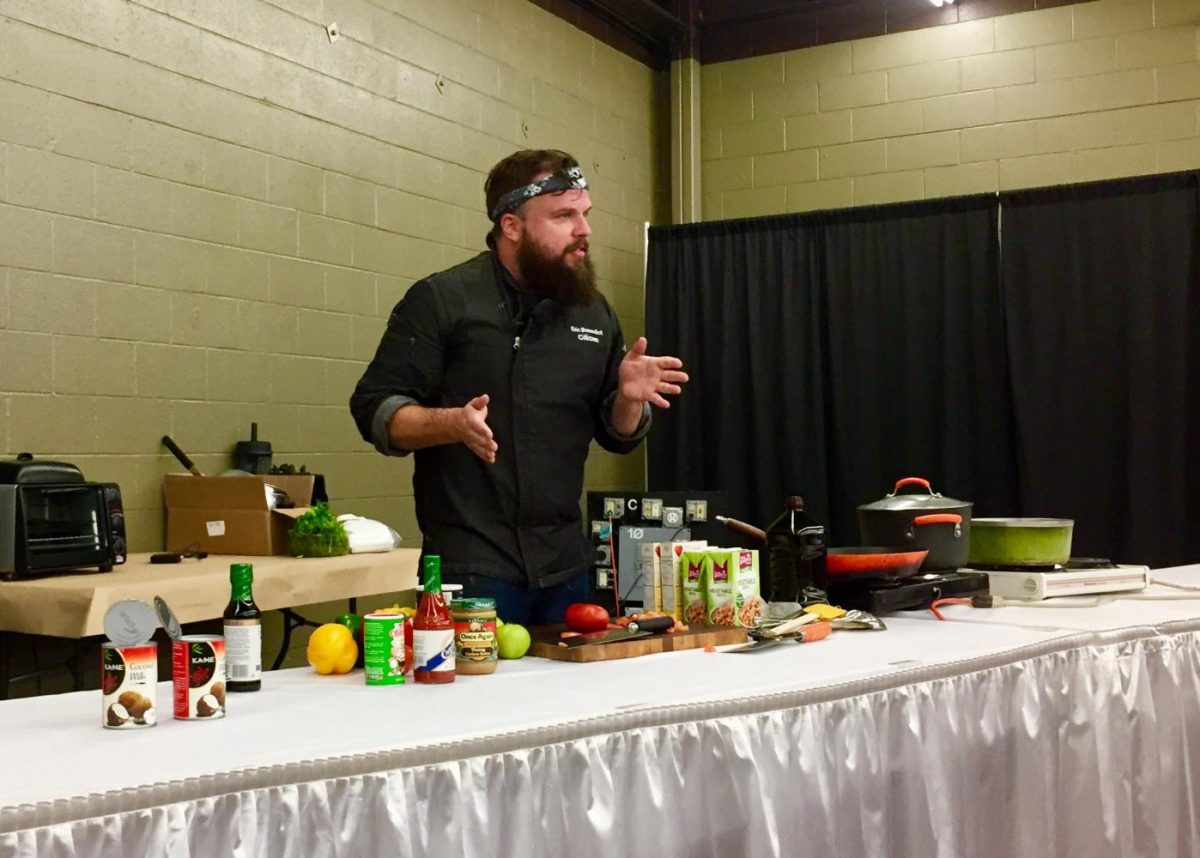 This past Sunday, the DeltaPlex Arena accommodated an array of vendors, speakers and chefs, as well as over 1,800 community members for the annual Grand Rapids Veg Fest. Veg Fest is a day dedicated to sharing information about plant-based lifestyles, compassion for animals and conservation of the environment. Attendees paid $10 to fill their stomachs with a variety of vegan food samples, learn about products, connect with local organizations and receive support for adopting a plant-based diet.

Since Grand Rapids is one of the most vegan-friendly cities in the United States, with over 40 identified vegan restaurants, the festival was full of vegan food options. Large crowds flocked to Uncle Cheetah’s booth, where they were serving up samplings of their new vegan menu, featuring vegan grilled cheese and the “Healthy Wealthy” soup. Afterwards, many stopped at Love’s Ice Cream for their specialty: a vegan version of a chocolate-covered Michigan popsicle. If participants were interested in how to cook dishes in their own home, they could watch one of five cooking demos presented throughout the day where local chefs featured vegan recipes, such as cashew curry and lasagna.

Beyond food, the event offered lectures and panels about plant-based diets and animal welfare. Speaking on the important relationship between diet and heart health was Dr. Joel Kahn from Ferndale, MI. Kahn shared that, contrary to popular belief, eating vegan is actually a relatively old practice and showed evidence of its health benefits using scientific data. The Pritkin and Ornish diets, rooted in studies from the 1940’s, have shown great results in reversing symptoms of heart disease, the number one killer of Americans. Kahn said of heart disease “it is easier to prevent than reverse”. In a world where many things are polluted, he stressed how we are in control of how we treat our bodies.

“It doesn’t take a completely vegan lifestyle,” said Kahn. “Exercise, sleep, don’t smoke, eat fruits and vegetables, and enjoy a little alcohol every once in a while. That’s all based on really strong, good science.” Kahn became a vegan when he was a freshman in college, and says that it was a good place to start.

Miriam Kornelis, President of Calvin student organization “Students for Compassionate Living”, attended Veg Fest for her third year, as she enjoys connecting with people who have the same interests in animal ethics.

“At VegFest, it’s empowering to see so many local businesses making positive strides in minimizing the harmful impacts their industries have on the environment, humans and non-human animals,” said Kornelis. On Sunday, she learned about Sanctuary Moon, a“micro-sanctuary”. This small-scale, farm sanctuary for rescued animals is one of several in the Grand Rapids area.  At these “micro-sanctuaries,” interested students can volunteer and spread the word about how they promote animal welfare.