Explosions in the Sky concert ignites the CFAC Auditorium 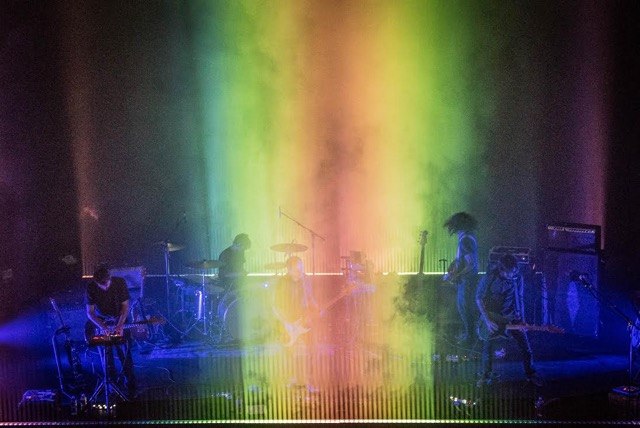 Explosions in the Sky offered a unique concert experience for those in attendance. Photo by Calvin SAO.

It is a curious thing to watch an entirely instrumental concert. There are not the same sort of pauses and structures as other shows; there is no singer to thank the crowd for their applause and often there isn’t even enough space left between songs for applause.

Moreover, instrumental music relies on dynamics to a higher degree than popular music does. The listener has nothing but the music to connect with — no words or voices — so more care must be placed in deciding what should go into a song and what should be left out.

Because of this, one of the most foreign concepts to standard pop concerts becomes a tool for instrumental concerts: silence. For music that relies so heavily upon dynamics to bring about the purpose of the song, silence is not a bad thing — a quiet moment makes for a more powerful loud moment later on.

At Explosions in the Sky’s performance in the CFAC last Thursday, there were plenty of powerful moments both loud and soft. The group returned to Calvin College in support of last year’s album “The Wilderness.”

Local dark-pop group PARTS opened the show. Despite facing some technical problems with the sound system throughout their set, the duo fought through to effectively perform songs from their self-titled EP as well as some unreleased songs. The synth-led music seemed to win the affection of the crowd, as the applause between songs transitioned from polite to enthusiastic gradually through the 40 minute set.

What followed was a mesmerizing hour and a half of live music. The band performed songs that spanned their nearly 20-year career, hitting fan favorites such as “Your Hand in Mine” from the 2007 album “The Earth Is Not A Cold Dead Place,” as well as songs from “The Wilderness.”

Paired with the songs was a breathtaking light show, which jittered and moved with the music as well as shrouding the band with a heavenly veil. As the songs grew and retracted, so too did the lights — playing with conventions of light and dark as well as expanding on the music with flashes of color. It was the perfect testament to the beauty of live music — a masterful display of music enhanced with visuals that told the story of the song just as much as the song itself.

Explosions in the Sky’s music is known for its dramatic musical turns, as songs often begin small and build to massive crescendos. In a live setting, these dramatic turns are pushed to even further extremes.

Music-listeners know the difference between loud and quiet in music, as it is a popular convention between verses and choruses. But an Explosion in the Sky concert will make them truly aware of that difference, as near-silence will be met with tremendous surges of sound and light that wallop the audience with little warning.

Near the beginning of Explosions in the Sky’s set, the audience attempted to fill silent moments with clapping and cheering, but by the end of the night it seemed we all realized that silence was not just a dead space in a song, but that it was just as much part of the song as the loud parts.

Instrumental music asks a little more of its audience, forcing them to pay closer attention to what the music is saying without any lyrical or vocal cues to latch onto. But this is a rewarding practice; with little more than a sentence, Explosions in the Sky said more than enough.