Calvin’s use of adjuncts increasing, still below average 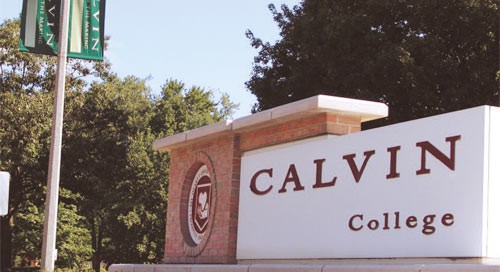 29.2 percent of Calvin's faculty were part time as of fall 2016; Photo courtesy calvin.edu

Calvin is following a national trend by using a higher percentage of adjunct professors in recent years, though it still falls below the national average.

According to a recent report by the American Association of University Professors (AAUP), as of 2014, about 41 percent of the academic labor force was made up of part-time faculty. This number has been roughly steady since 2009, but it’s much higher than in 1995, when 33 percent of university instructors were part-time faculty.

Provost Cheryl Brandsen said that being “wildly different” from that national trend is important to Calvin, since the college values a “different educational experience” that emphasizes small classes and faculty members with terminal degrees.

According to Brandsen, Calvin has set an informal goal that no less than 80 percent of credit hours taken by students should be taught by full-time faculty.

Brandsen acknowledged that the current number is below the target and said, “We need to get it back up.”

However, the 77 percent also excludes credit hours taught by affiliate faculty, who are typically hired for a longer time than adjuncts and have higher teaching loads.

Professor Chad Engbers, co-chair of the English department, explained that that English department uses adjuncts to teach the Written Rhetoric (English 101 and 100-102) classes due to high demand and limited numbers of full-time faculty:

“As tenure-track colleagues have retired from the English department, the college hasn’t had enough money to replace them, so there are simply fewer people to do that work.”

Engbers also pointed out that tenure-track faculty often get course releases for committee work or other projects outside of classes. In the English department, these faculty members typically don’t teach Written Rhetoric when they get course releases.

“You always want to hire the kind of person that you want to keep around indefinitely, and the position simply doesn’t allow for that. All of our adjuncts in English are excellent teachers, and we simply can’t offer them the kind of benefits or the kind of job security that they deserve.”

Engbers added that increased use of adjuncts is also “a risk for the college in terms of mission.” Adjuncts are not required to attend Reformed churches, subscribe to the CRC’s creeds and confessions or send their kids to Christian schools.

“When more and more of our courses are taught by adjuncts, there’s no longer anything to guarantee that the curriculum is Reformed,” Engbers said.

In addition to teaching high-volume courses like Written Rhetoric, Brandsen said that adjuncts are often hired in departments like business and engineering to teach highly specialized courses in which full-time faculty members don’t have expertise.

John Varineau is currently an adjunct professor in the music department after taking one of the voluntary buyouts in the spring of 2015.

While Varineau said that Calvin’s compensation for adjuncts is “better than any other college or university in West Michigan,” he added that adjuncts receive “no benefits beyond salary, an email address and a library card.” There is also no academic dean dedicated to overseeing adjuncts, and they receive no representation on faculty senate or any other governance committee.

Varineau noted that adjunct professors are required to pay a $25 deposit in cash for their office keys, something Calvin doesn’t even require of students for dorm keys.

“You ask us to come teach here and trust us with your students, but you don’t trust us with an office key. I find that somewhat insulting,” Varineau said.

Varineau also said that “each adjunct’s story is going to be different” — some get their benefits and living wage from another employment, while “others are literally scraping by.”

Many adjuncts are easily replaced, Varineau said, which means that bad course evaluations can be enough to end their employment. Lower enrollment and cost-cutting can also result in fewer sections being offered, which often means previous adjuncts are no longer needed.

Despite these concerns, Varineau said that each adjunct is here because, for some reason or another, they want to be teaching at Calvin. “No one is making them do that.”

The AAUP report includes other concerns about increased use of adjuncts nationwide. For example, when asked in a survey whether their institutions support academic freedom, 46 percent of part-time faculty agree, compared to 67 percent of full-time faculty.

The AAUP emphasizes that they are not critiquing the work of current part-time faculty. Instead, their report explains “why reliance on part-time faculty is not a viable long-term solution for higher education.”

The report continues: “Institutions should work to rebuild the ranks of full-time and tenured faculty not just for economic reasons but also because the protections of tenure provide the academic freedom to take risks and to innovate, which leads to breakthroughs in the classroom and beyond.”