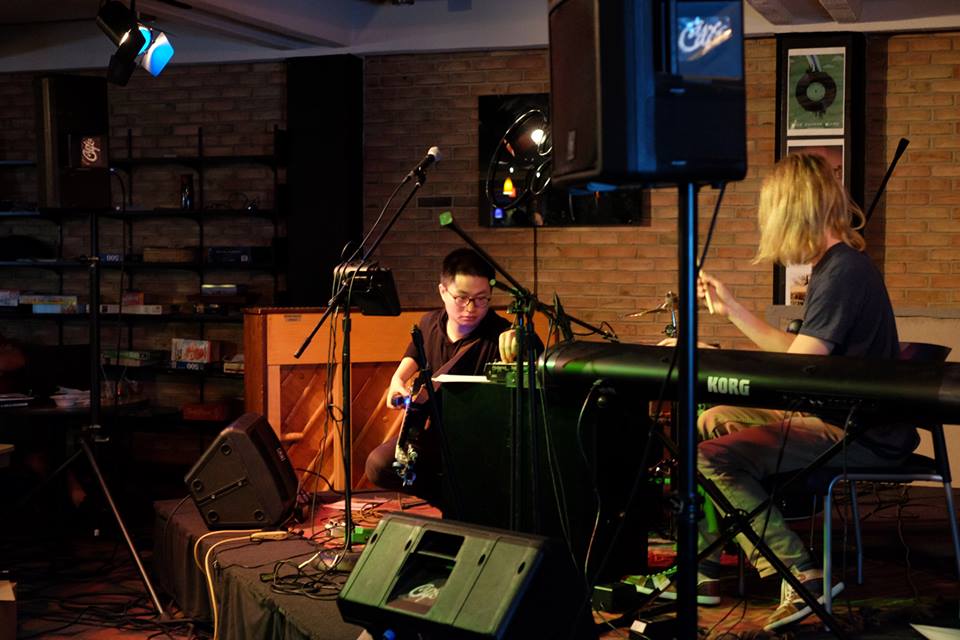 James Li and Johnson Cochran started their music career recording in the dorm basement and playing at the Cave. Photo by Matthew Schepers.

Calvin SAO is known for bringing new and upcoming artists into the community in order to support and promote their work. However, while perhaps still in the earlier stages, Calvin has also started to become a spawning point from which bands can originate. James Li and Johnson Cochran, both of whom graduated in 2016 and were roommates during their sophomore year, formed the bands Liance (Li) and Parlor Voice (Cochran) during their time at Calvin, and have since gone on to attempt to work in the professional music industry.

Li and Cochran bonded early on in their time at Calvin over their passion for listening to and creating music. “We were actually in a band together for a minute, and then we kind of decided we wanted to take things our own separate directions,” said Cochran. “So, we both started our own bands around the same time in the basement of our dorm — at which point the only other place we actually played was open mics at the Cave Cafe. Both being songwriters and wanting to record, we really helped each other out and were involved in each other’s work. I had some equipment and we would go record down in the storage basement, because our RD really supported us and gave us that space.”

“We influenced each other’s listening habits a lot,” Li said. “We got obsessed with the same bands at the same time — Nirvana, The National and Neutral Milk Hotel, and managed to see many of them live (not Nirvana though). There’s a song about our friendship that I wrote which culminates at a Neutral Milk Hotel show. It’s named “Mt. Vernon OH,” after Johnson’s hometown.”

Both Li and Cochran were heavily involved in the music community at Calvin during the early stages of their bands. Working for SAO during concerts and running the Cave Cafe provided space and an audience for the bands to perform and try out new songs. It was during Li and Cochran’s junior year that they began to branch out to the Grand Rapids community

“For a long time my musical perspective was limited to campus, until I went to Lamp Light 2014,” said Li. “Lamp Light was my first introduction to Eastown, house shows and DIY culture. It was probably the best weekend of my life — I hadn’t felt such a warm or generous community of creatives before. It made me realize that there was nothing stopping me from recording or playing at my friend’s basements as well.”

While Li and Cochran are certainly dedicated to their music and work, neither of them consider themselves to be ‘professional musicians.’ Cochran said, “There was an emphasis on the idea that you contribute to a community and it gives back to you. It’s a very reciprocal community and we both gravitated towards that. That’s what we wanted to get into, not the music business per se. As we get more into our careers we’re starting to deal more with things like how record labels work, how does one pitch an album to a magazine, etc.”

“Ideally capitalism should have very little to do with art, but I’ve accepted that it’s likely that I will never be able to make a living through music alone. However — and this is certainly something that I’ve picked up from Calvin — I believe that music is a vocation and not a profession. Being a musician is a posturing towards the world. It’s a way of experiencing and processing life,” said Li.

While still being heavily involved in each other’s works, Liance and Parlor Voice have each gone their own separate ways and taken on their own musical style. “Lyrically, my art is very inspired by my heritage,” said Cochran, who takes inspiration from bands such as Guided by Voices, The National, Sun Kil Moon and Cloud Nothings. “I grew up in Atlanta with a family of southern white people who have a complicated and difficult history to reckon. A lot of my art is reaching back into the past and sort of exploring and reconciling.”

Li describes his music as being “a very high context and literal style, using my memories to find the universal in the mundane. The project’s more or less become a way of self-documentary. Not that I find my life particularly interesting, but I enjoy distilling experiences into pop songs and learning the ways that memory can affect identity.”

Li and Cochran’s passion for music is evident in Liance and Parlor Voice’s work. “Even though I probably don’t register on anybody’s radar, I’ve made a lot of friends doing this,” said Li. “I’ve played a lot of good shows and I’m always motivated by making the next album. And while I’ve recently moved countries, and will move again this year, music is something that I can take with me. It’s constant work, but it’s work that’s meaningful and continuously rewarding.”

Parlor Voice is playing a show at The Workshop in Grand Rapids on March 27 with band Room & Board. Both bands are extremely grateful for having made it this far into the business. “We’re definitely aware that the music community needs people to give, to contribute time and energy,” said Cochran, “because in the end James and I believe very deeply the power of music and using music as a lifestyle.”

Li also said, “Although there are plenty of disappointments, being able to make an album or play a show and say ‘Hey, I did that because I wanted to do it,’ is an incredible statement of self-determination.”