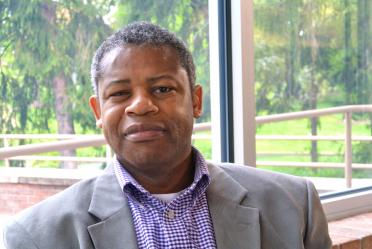 Reverend Reginald “Reggie” Smith is no stranger to Calvin’s campus; just this month, he spoke on Christ’s conception and birth at a Monday chapel. Last Friday, Smith was unanimously approved as the Christian Reformed Church’s new director for the Offices of Race Relations and Social Justice.

This announcement follows the CRC Board of Trustees September 2016 decision to combine two positions — coordinator of the Office of Social Justice and director of race relations — into one position.

Smith earned his Master of Divinity at Calvin Theological Seminary. He has pastored several churches, most recently Roosevelt Park CRC in Grand Rapids. He has also served in the CRC as president of the board at Back to God Ministries International, the CRC’s media ministry.

He is accepting his new position after serving as the interim director of race relations for the past two years. He will officially begin his new role in March of 2017.

Several members of the Calvin community have expressed their enthusiasm and support at hearing of Smith’s appointment.

“Reggie Smith has a pastor’s heart, a keen mind and great gifts for listening, teaching and preaching,” said Kathleen Smith, associate director of the Calvin Institute of Christian Worship. “​He will effectively engage issues of justice and racial reconciliation. In challenging times on these topics, Reggie will bring wisdom and experience as he gathers people in conversation together.”

“Rev. Reggie Smith is a gifted pastor, with a passionate concern for both nurturing caring communities and offering prophetic witness in society,” added Dr. John Witvliet, director of the Calvin Institute of Christian Worship and Calvin professor. “He has been a resourceful collaborator with us at the Calvin Institute of Christian Worship, working on topics related to inclusive approaches to the spectrum of abilities and disabilities in congregation life, urban ministry and vocational discipleship.”

Michelle Loyd-Paige, Calvin’s executive associate to the president for diversity and inclusion, said she has known Smith on a “social and ministry professional level” for several years. “I have every confidence in his leadership ability,” she said.

According to crcna.org, Smith is looking forward to combining his work at the Office of Race Relations with that of the Office of Social Justice:

“We have some great people in the Office of Social Justice,” he said. “People who have prophetic voices and who are very good at organizing people around what they do. I am very grateful to come alongside of them and learn and listen about where we should get involved in the good fight.”

Taking leadership of two of the CRC’s offices will be no easy task:

“One of his biggest challenges will be shaping the identity of his newly organized office going forward while responding to the social concerns of our day with a prophetic voice on behalf of the CRCNA,” said Paige. Thankfully, Smith has years of experience working within the CRC to aid him as he navigates this transition.

Paige said Smith’s “longevity within the CRCNA provides him with a unique perspective on the state of race relations and social justice within the denomination.”

“Change doesn’t happen overnight, or in a year, or even in a decade,” Smith said, according to crcna.org. “It is a long obedience in the same direction … I think that these offices of race relations and justice stand at the nexus of where the Lord really wants to take us.”