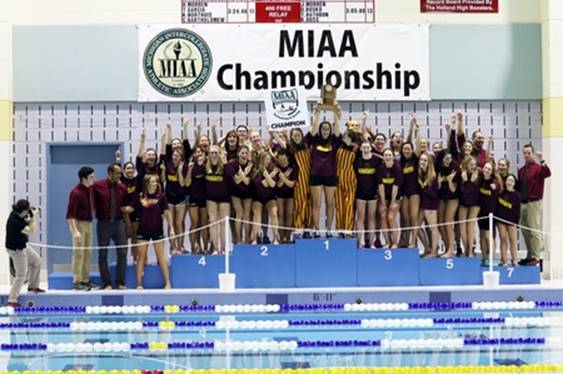 Hosted by Hope College, Calvin’s women’s team won the championship while the men finished in second behind Albion College.The MIAA Swimming and Diving Championships took place this past week at the Holland Aquatic Center. The women’s swimming and diving team has now won 13 championships in a row, which is the longest streak in MIAA history, surpassing Hope College’s women’s championship streak of 10 in the 1980s.

The women dominated the other five schools at the meet,winning by a commanding point margin of 868 to 687.Hope College was the second place team. This was a much wider margin than last year, when the women’s team had a margin of only 37.5 points

.Individual champions on the women’s side included junior Abby Van Harn, who won the 50, 100, and 200 freestyles. Van Harn also won the prestigious Most Valuable Swimmer of the Conference award.

The women’s team landed seven on the All-MIAA Swim team: Van Harn, Serino, Smith, Murphy, Gunderson, Mattson and Bradley. For captain Hillary Glover, watching Bradley win both boards in diving was the highlight of the meet. “She has incredible talent and has worked so hard for this,” said Glover. “Divers are typically less highlighted than swimmers so it was really cool to see her get the spotlight.”

The men’s team was less dominating at the championships than the women. Albion College took control of the meet from the very first event and widened the score with Calvin all three days of the meet, winning 985 to 772.

Stoughton noted after the meet that “Even though Albion experienced a new hope this year, the Calvin men will strike back. I ensure you, our resolve has never been stronger.”

985 is also the highest-score ever recorded in the conference, surpassing Calvin’s score of 951 in 2016. Though the men did not win, senior captain Brett Stoughton thought that “most individuals took one step forward in their performance.”

Van Harn is ranked 7th in the 50 entering the meet, and is Calvin’s only returning individual All-American. She notes that she has a much better idea of what to expect this year, and is looking forward to setting “more concrete goals and really just enjoying the moment with my teammates by my side.”