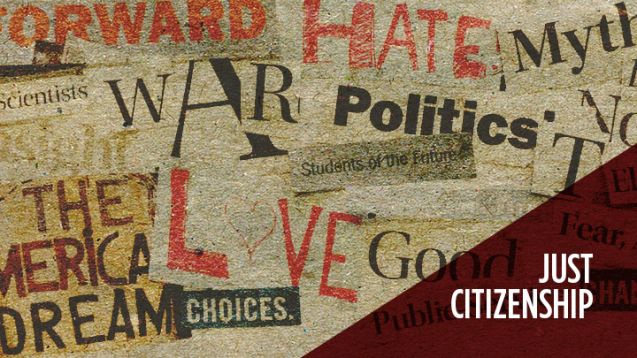 This was the fourth installment of the weekly forum which seeks renewal in society and politics. Photo courtesy Calvin.edu.

“No movement or ideology captures the attention of millions without, on some level, pointing to something genuinely good.” This is why we must contend with nationalism, according to Professor Michael Watson, one of the panelists at this past Monday’s Just Citizenship forum.

The topic of discussion at this week’s forum was “Nationalism, Democracy, and Religion: Checking the Blind Spots.” In addition to Watson, Christina Edmondson, Tracy Kuperus and Bob Schoone-Jongen completed the panel. Nationalism, broadly defined, is an allegiance to one’s nation and people. According to Watson, nationalism can be good, but good nationalism looks much different than the nationalism of today. Nationalism can be expressed as a unifying patriotism or an alienating, exclusive elitism.

Professor Kuperus spoke of the rise of populism — specifically the rise of populist power in the past year with the Brexit vote in the U.K. and the election of President Trump in the U.S. — both seen as victories for mainstream populism. She defined populism as anti-establishment, critical of the elite class, embracing the ordinary person and promoting nationalism.

Populism generally weakens a nation’s economy and is illiberal. Illiberal in this instance is a term which describes a governing state that shows disregard for both minority rights and the rule of law. This illiberalism is in tension with the American vision of liberal democracy: a kind of government which purports to seek the balance of honoring the majority’s wishes and fulfilling the minority’s needs.

Populism gravitates toward an appeasement of the majority and a neglect of the minority. As America moves toward populism, Kuperus warned, “these are highly polarized times” politically, and “populism accentuates polarization.”

Professor Watson spoke about the fact that though the idea of nationalism is often used negatively — even as an accusation is some cases — there can be a good expression of nationalism. Nationalism speaks to a person’s need to belong to something bigger than themselves. In that sense, it is a quasi-spiritual ideology.

Watson argued that a healthy nationalism requires not blind allegiance to one’s nation, but a robust understanding of what it means to belong to a particular nation, what it means to be a good citizen of that nation and then working to help ensure that other citizens maintain the common standard. For Americans, the standard of good citizenship is found in the Constitution.

A good nationalism will not be a blind patriotism, but an attitude of discernment toward the people in power and the decisions they make. Watson quoted G.K. Chesterton who once said of nationalism, “my country, right or wrong” is like saying “my mother, drunk or sober.” It is natural to love one’s country and seek its welfare, but it is also important to discern the good decrees and actions from the bad.

Dr. Edmondson helped shine some light on the blindspots of American liberal democracy. She explained that the idea of “‘America first’ runs into problems when you begin to define who gets to be American.” When conversations of belonging become conversations about skin color, religion or income-level, exclusions quickly produce inequality. Edmondson pointed out that there has always been an exclusion of people of color in the American dream. This is one aspect of nationalism that must continually be questioned and repaired.

According to the panelists, the preamble to the Constitution serves as an example of both good and bad nationalism. It demonstrates the pride that the writers felt toward their new form of government, their belief that liberal democracy could create the most good for the most people.

However, Edmondson explained that the nobility of the phrase “we the people” becomes distorted when questions arise like: “Who is included in the general welfare?” “Who is protected under the “common defense?” These kinds of questions seek to create boundaries among people and betray our national foundation of equality. According to Edmondson, this is a dangerous and distorted nationalism.

The panel also approached the question of how to be a good citizen. Kuperus promoted this strategy: be an active citizen, call out injustice, engage the democratic process by voting, love and seek the truth and read broadly in order to best discern the reality of the issues that are important.

Edmondson concluded by quoting Dr. Martin Luther King Jr.: “There can be no deep disappointment where there is not deep love.” She advocated for turning potential disappointment with nationalism into a healthy critique of authority and government, “good nationalism requires a robust critique.”