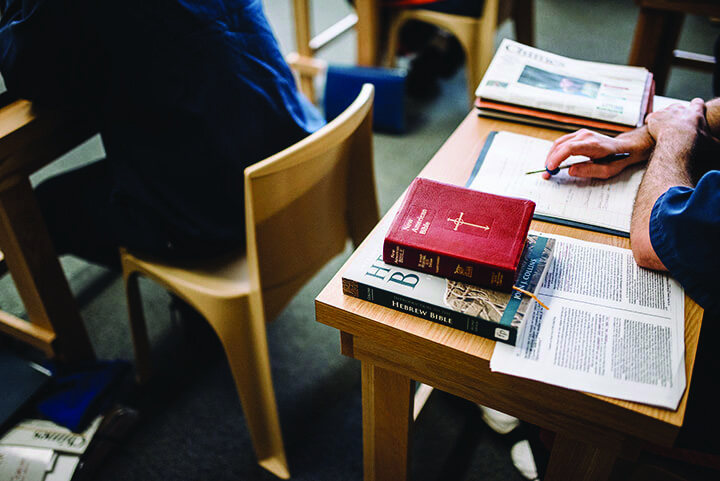 Anyone who attends Calvin knows there is much more to the college than meets the eye. While the campus itself is welcoming with its towering trees and wide Commons Lawn, there are also the challenging courses and stimulating discussions that can be found across the curriculum. But if this is all you are seeing, you are still missing something. Grand Rapids is not the only place that you can see the campus of Calvin College. To see how far the campus really extends, you would have to travel to the small part of Calvin’s campus that can be found at the Handlon Facility in Ionia, Michigan. Here you will find a program that is on its second year of realization. It is known as the Calvin Prison Initiative (CPI).

The Start of the Program

The CPI had originally began with the Calvin Seminary, when a student became interested in prison education and reform. Julie Bylsma, recent graduate of Calvin College and volunteer coordinator for the CPI, commented that this student “dragged his professor, John Rottman, to Angola Louisiana State penitentiary so that they could see, firsthand, the educational reforms in the prison that they had heard about.” At one time, this facility was one of the bloodiest prisons in the U.S. To combat this nasty reputation, many programs began to take place there, completely transforming the prison.

After the student and professor had seen the amazing work that could be done within the walls of a prison, they wanted to explore similar opportunities that might be possible in Michigan. As it turned out, there was a donation that had been given a few years prior that was intended for a prison ministry, which Calvin did not have.

“When they realized that they had this money,” said Bylsma, “the Seminary started what they called ‘enrichment classes’ at the Handlon facility in Michigan. One professor would teach a class every couple of weeks to twenty inmates.” There was no credit given for these classes; it was just an opportunity for prisoners to learn. They would study a book at a time, and these books would be provided at no cost to the students. The inmates involved wanted more though; they asked that they might be offered bachelor degrees, or some other college degree for the work that they were putting so much effort into. Over time, more seminary professors got involved, beginning the process for what would eventually be called the Calvin Prison Initiative began.

The professors involved began to form ideas and got in touch with prison administration. Professors Todd Cioffi and Christina de Groot were selected to be co-directors of the program. The work that was needed for the establishment of a prison program was quite the learning experience for the professors involved. They leaned heavily on the administration for help and answers, in setting up the policies and acceptance methods. The close relationship that formed between Calvin College and the administration was very important to the setup of the program.

“There was a lot of negotiation, and even some begging,” recalled Bylsma. “Accreditation was needed for a new campus that would be added on to Calvin.” An additional location to a college campus is something known as a satellite campus. The college side of Calvin eventually got involved to work with the seminary, and over the course of about five years the program was finalized.

The whole program is currently run exclusively through private donations. The prisoners are not required to pay tuition, and there is no government funding.

The first year of the program was launched in the fall of 2015. The Handlon Campus shares the same academic schedule as the Grand Rapids location of Calvin, known as the Knollcrest Campus. The main difference is they have a three semester schedule, where they take three classes over the Summer. The program is offered to any male prisoner in the State of Michigan that meets the requirements. The prisoners have to have their GED to be eligible, and are held to behavioral standards. An application must also be filled out in order to be considered for acceptance.

About the Richard A. Handlon Correctional Facility

The Handlon Facility houses 1,500 inmates. Calvin is not the only institution that can be found there; a program called the Vocational Village also houses inmates at that location. They offer welding training, auto repair, carpentry, plumbing, electrician and other such experience training that allow prisoners to meet requirements so as to be able to hold certifications when they are paroled. New for Michigan is the Pell Grant that will also be taking place at the Handlon facility. It will provide college education to prisoners that are soon to get out so that they can obtain degrees by the time they are released. Though these programs are unrelated to Calvin, the Vocational Village participants and the incarcerated college students that will be coming in under the Pell grant will also be in the same housing unit as the Calvin students, providing a further educational atmosphere to the facility. In addition to those three are four other housing units that also contain other reforming programs.

What the CPI is Today

The CPI will be growing each year it is active. According to Bylsma, “it started with the initial twenty students that were accepted for the first year. Twenty more have been added for this past year. A few have dropped out, or been asked to leave for various reasons, so currently there are thirty-seven students in the program. Next year there will be fifty-seven students. It is a five year program, so when it is at it’s maximum capacity, there should be a hundred Calvin students at the Handlon facility.”

Because of the smaller size of each class, only one degree is available to the students: ministry leadership. Only so many classes can be offered to them. However, the Handlon students are expected to meet core requirements. The course requirements for adult learners are the same as that of the main campus. The ministry leadership degree is unique and only available for the Handlon students. The Grand Rapids campus only offers it as a minor. The few electives that they can take are chosen by the administrators, though they take the requests and interests of the students into account. Currently they are investigating the possibility of a language course for them, as students displayed interest in learning new languages.

After students graduate, there are various paths they can follow. About half of the prisoners involved are serving life sentences. For them, graduation will mean being transferred to other prisons, maybe the ones they originally came from, and they will act as a kind of missionary. They will be able to go where traditional missionaries cannot: into the daily lives of prisoners. They will be able to use their education to affect the lives of those they live with. They can also gain leadership opportunities, become assistant chaplains, or even take on teaching positions for GED courses or, possibly, unofficial college courses. Students that will be released will have a college education that will aid them in getting a job, and help them to re-enter society more smoothly.

The program has far exceeded the original expectation for the program when it first began. Over three quarters of the students would meet the honors requirements that we have at Calvin. There are a few who have 4.0 GPAs. Bylsma also comments that “the support from Calvin has also been welcomed, as a rock for the program to find their feet on.”

Students at the Knollcrest Campus can become involved and work alongside their fellow students at the Handlon campus. The CPI program has a need for volunteer tutors for the Handlon students. Many of these men have been out of touch with education for years, and appreciate the help to get them back into the flow learning. Anyone who might be interested in such opportunities can drop by the CPI office in Hiemenga Hall room 322. Or you can contact Julie Bylsma, who is the volunteer coordinator. It is something that you would have to be committed to. There are background checks involved and orientation. Bylsma commented, “It’s very intensive, but it is also very worth it.”

The Handlon campus is something unique to Calvin. As Bylsma put it, “it’s like a hidden part of campus but you’ve got brothers there too.” They read and enjoy the same books that we do, and learn under the same professors. They even read the Chimes every week, and love to hear new news about the Knollcrest Campus. They may be a bit farther away, but they are as much part of this college as anyone who stays in the dorms.