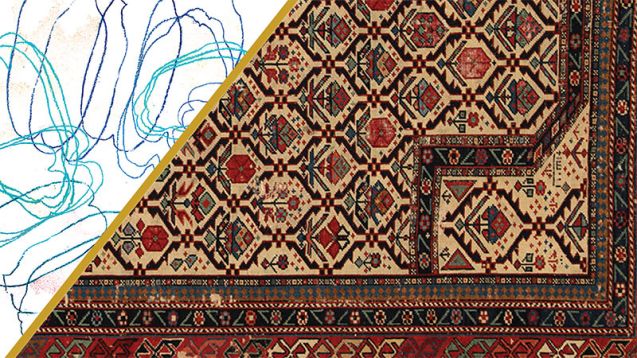 “Hoof prints? Wait, maybe coffee beans?” We trade guesses as we examine the shape repeated across the long piece of brown paper. It’s simple — an outline made by a few contour lines — but duplicated 84 times in 7 different colors. The paper hangs on the white wall of Gallery 1 in Calvin’s Center Art Gallery, and the shapes are projected in blue-green light along the wooden floor. The room is silent as people watch the shapes at their feet create different patterns and pictures. Every so often, someone’s movement catches the attention of the motion-censored skylight, and the small purple LED lights cast a cool glow over the room.

The unidentifiable shapes are the product of one person’s prayer. Artist Joyce Yu-Jean Lee spent 28 days in prayer over the United States 2016 presidential election. Three times a day, Lee unrolled a section of paper and knelt upon it. She then traced the outline of her legs and feet on the paper, creating the 84 shapes hanging on the wall and shifting across the floor. Lee took the shapes on the paper and animated them to move in different configurations. Anyone can walk into the gallery and enjoy the way the lights move along the floor. But the patterns can be appreciated on a deeper level if one enters the smaller, side gallery.

Gallery 2 currently contains “Pathways to the Divine,” a collection of Middle Eastern prayer rugs on loan from Jim and Marcia Verbrugge. Thirteen rugs hang on the wall, each a rich and beautiful piece of cultural history. Prayer rugs function as “portable mosques” for prayer, as Muslims pray 5 times a day in order to physically and spiritually re-orient themselves towards Mecca. Certain symbols and patterns in the rugs serve as reminders for Muslim worshippers, helping them focus their minds on the daily discipline of prayer.

Lee saw these rugs, and it’s no coincidence that the patterns on the floor echo the patterns next door. As an installation artist, Lee often works “to spec” — meaning she creates for a certain space. After Joel Zwart, Calvin’s director of exhibitions, invited Lee to exhibit at the Center Art Gallery, she came to check out her space. She noticed the large skylight and wood floors in Gallery 1, and saw pictures of the rug exhibit that had yet to arrive. Lee was inspired.

She organized the shapes into patterns that echo the prayer rugs, and thus the room itself becomes a prayer. The projections weave a rug on the floor, and the motion-censored skylight reminds viewers that someone is listening up above. Lee sees her project as a gesture of empathy to Muslim Americans living through this year’s presidential race. Muslim Americans are often a hot topic for candidate debates, and Lee felt a connection to them as both a person of faith and a child of immigrants. Though she did not originally intend to make a political statement, Lee realized that she could not separate her personal life from the political climate. Though “Verti Call” can be enjoyed without this context, as the lights are dazzling and the space is quiet, Lee hopes that some observers will “pause, and remember,” how difficult it can be for Muslim Americans to live out their faith.