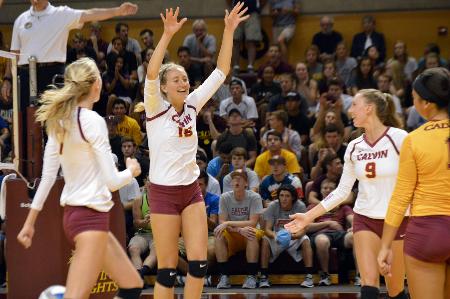 Calvin’s women’s volleyball team entered this season with as much hype as one would expect from a team with various award winning athletes and several national championships. Championships, mind you, that are not too distant of a memory. In fact, the 2010 and 2013 national champions were both lead by current long-time head coach Amber Warners.

Expectations will be tough to dampen for a squad that returns two All-Americans in junior Jenna Lodewyk and and senior Laura Danhoff. The two are just some of many returning from a 30-4 2015 team that claimed the MIAA Championship and made it to the regional finals of the NCAA III Tournament.

The hype was reflected in the first MIAA Coaches Poll where Calvin was picked to repeat as MIAA Champions. The team was also ranked 5th in the country in the first set of AVCA Division III rankings before the season started.

In an interview with Calvin Sport Information, coach Warners gave her thoughts:

“This group is one of the hardest working groups we have ever had. There is a very upbeat dynamic within the group and they are learning to be very versatile, because we will have people playing multiple positions.”

Living up to expectations, the Knights won their first three contests last weekend with a 3-2 victory over Millikin University and 3-0 sweeps against University of Wisconsin-Eau Claire and the University of Chicago. Calvin matched up well with Chicago individually, but dominated in many team categories including a plus-9 dig and ace advantage as well as .211 higher hitting percentage.

“We played with a steadiness throughout the whole match that we didn’t see yesterday [versus Wisconsin-Eau Claire],” said Warners. “I am very happy with our defense and serving.”

Danhoff was named the MIAA player of the week for her efforts over the three matches, tallying 33 kills, 15 digs and a .525 hitting percentage. Coach Warners praised Danhoff’s wholeness on the court and her ability to build from her 2015 season.

After an undefeated weekend, Calvin moved up two spots in the national rankings to number three. The team did not have time to rest before they open up conference play. Undefeated Albion College traveled to Van Noord arena this past Wednesday to face the Knights. Calvin swept Albion in straight sets 3-0.

Calvin’s next home match will be this Saturday, September 9 at 6:30 p.m. versus Trine University.