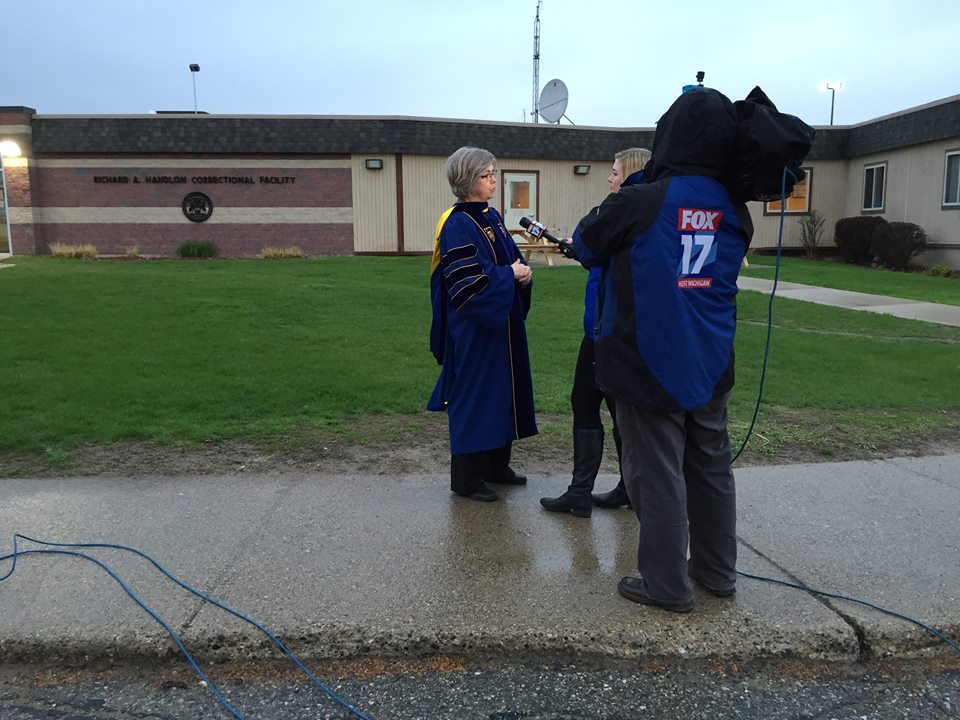 It’s a sight not often seen in prison visiting rooms: students clad in blue and orange mingling with robed college faculty and board members and representatives from the Michigan Department of Corrections.

Good-natured chatter filled the room as attendees waited for the Calvin Prison Initiative Convocation to begin, a celebration of the accomplishments of 20 students who are in the process of earning a Calvin College bachelor’s degree in ministry leadership from behind the bars of the Handlon Correctional Facility. This convocation commemorated and celebrated the end of their first year of studies.

“We saw you on the news!” one of the students exclaimed to professor Christiana deGroot, the co-director of the Calvin Prison Initiative, who has also been teaching a religion course on the Old Testament at Handlon this semester.

“Very eloquent,” her students assured her.

The chatter died down as music began to play and Calvin faculty and staff started to process down the aisle.

Though it was a smaller group than convocation at the Knollcrest campus, those present included a variety of professors from both the college and the seminary, Provost Cheryl Brandsen, President Le Roy and president of Calvin Theological Seminary Julius Medenblik.

Le Roy gave a warm welcome to those present. “I am deeply moved and honored to be standing here today,” he said, facing the Handlon students. “We believe that everyone who receives a Calvin education makes a difference wherever they are.”

As the convocation ceremony continued, aspects of Calvin’s traditional convocation were woven together with contributions from the Handlon students and brief greetings from the Michigan Department of Corrections.

The attendees were led in song by a small group of students who jokingly call themselves the “Handlon Tabernacle Choir,” following a convocation address by John Rottman, a professor of preaching at Calvin Theological Seminary.

A video presentation, made by one of the students and entitled “The Least of These,” described the contrast between how society sees inmates at Handlon and the truth about who they really are. Though these students are defined by their worst mistakes, they are sons and fathers, eager learners, redeemed and valued, a message that left students and Calvin staff alike wiping their eyes.

One student came forward to give a reflection, thanking Calvin and the Michigan Department of Corrections (MDOC) for working to make a program like this possible. The students presented several cards, hand-painted and containing personal messages, to express their appreciation to Presidents Le Roy and Medenblik and several people from MDOC.

After the ceremony ended, Calvin faculty and staff mingled with the Handlon students, enjoying refreshments and chatting about topics ranging from exams to churches to guide dogs for the blind.

Many of the students appreciated the chance the convocation provided to feel more connected to the college.

“I think it was a wonderful opportunity to develop a more intentional relationship with Calvin. Communicating with the president, deans, provost and professors in such a comfortable and relaxed setting made me feel part of the Calvin community,” said Mark, a student at the Handlon facility.

This program, which provides 20 inmates per year in Michigan’s prison system the opportunity to earn an accredited bachelor’s degree from Calvin, is an opportunity the students don’t take lightly.

“This is something I never expected to experience from behind the walls,” said Dustin, another student in the program. “We really hope this is a staging point for other programs like this to begin.”

Klaas Walhout, a Calvin senior who has been tutoring the students at Handlon for the past few months, saw convocation as an affirmation of their place in the Calvin community.

“It made real what we’ve been telling the guys for a long time. We’re their classmates and colleagues, and they’ve done an amazing job, working so hard to get to this point,” said Walhout.

“To see the presidents of the college and seminary, Michelle Loyd-Paige, the provost and so many professors spoke loudly that Calvin believes in the program that’s going on here and in the power of redemption,” said Bylsma.

“These students are so engaged in the ideas, the readings and the discussions, and to see their joy in their learning was so powerful and profound,” said Brandsen. “This is what it means to be doing kingdom work.”

Nick, another student at Handlon, was thankful for the chance to celebrate and eager to see what the future holds.

“I feel so blessed to be a part of this program. This is a calling I’ve been praying for, and I’m looking forward to serving and giving back.”