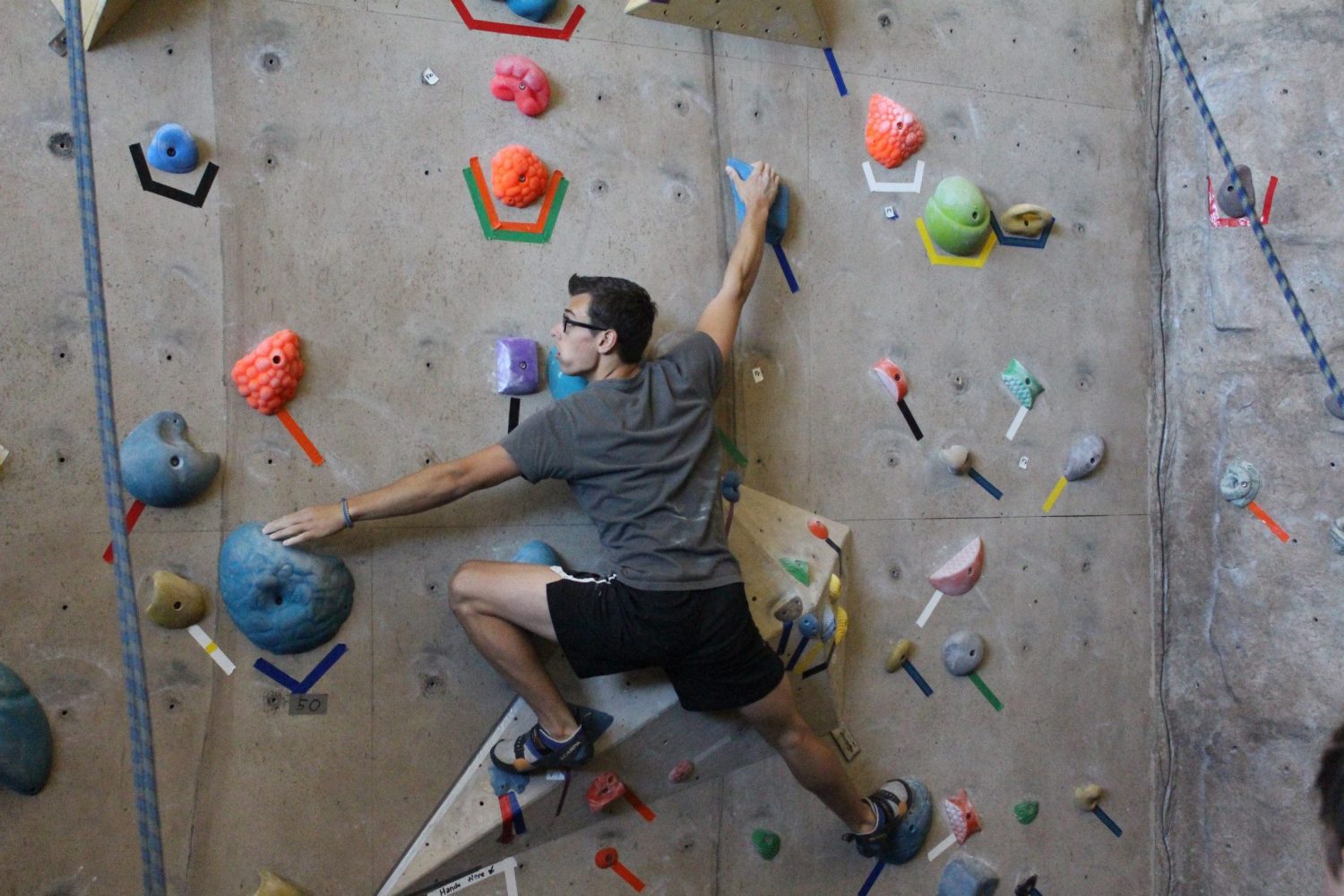 Last Saturday, Outdoor Recreation hosted its annual spring bouldering competition, attracting more than 40 students to the rock wall to climb, and even more spectators to cheer them on. The competition allowed three hours for participants to “send,” or successfully climb, as many of the 57 routes that they could by using only their own strength, unsupported by ropes.

Preparation for the event began last Saturday when the wall was stripped of all the holds except for a few for the PE climbing classes. After, student workers soaked holds in a diluted hydrochloric acid bath to rid them of chalk build-up and grease. Then, from Monday to Thursday the rocks were used by volunteer setters, including current students and alumni, to create over 57 routes for the competition. In addition, a few climbers took to the wall to decide what level of difficulty each route correctly fit into. Each route was numbered one through 57, becoming more advanced as the numbers got higher and worth more points.

Sophomore Evan Romero, who works at the wall and helped organize the event, explained that there are “definitely more logistics that go behind a comp like this.” Romero was in charge of stripping the wall and cleaning the rocks as well as overseeing the background details.

Using his skills he started developing freshman year, junior Eric Medema spoke of the process involved in creating and setting a route.

“The more routes you set the better at setting you can be,” he said. “I know all the holds that Calvin has: all the holds in the backroom and all the holds on the wall. When I set a route, I know what moves I want to incorporate into it, then I will know what kind of holds I want to use for it. When I set something, I will think about what level I want it to be. Then as I put one hold on, I will try that to see where I can put the next one, so it’s sort of like making your own puzzle.”

At the end of the designated climbing time, the three teams with the highest number of points from each category moved on to finals. The final round consisted of an unclimbed route where the contenders had four minutes to successfully send it. The person who got the furthest took the win and was able to choose from prizes such as a Grand Trunk Hammock, camping cooking utensils and climbing bags.

Hope Hinken and Jonathan Arringdale tied for the win in the recreation level. For intermediate it was Bryce Kaiser. And for the advanced level, Will Noyes took first.

In addition to climbing, participants had the opportunity to make a difference by signing up to sponsor a child climber in Romania, an international connection brought by Sophomore Rachel De Haan, who had a two-month internship working at a climbing gym in a low-income city of Romania last summer.

“I learned a ton of what it means to love kids,” she said. “One of the biggest things I learned is that this gym is not going to change the whole area we were in. That was really hard because I was doing this and I was like ‘so what.’ But you really learn that if you can be the best part of their day, then you are doing so much.”

After her experience there, De Haan was inspired to create a program where, for $20, Calvin students can sponsor a child by paying for the climbing gym membership for one month, since many of the children come from low-income families who are not able to pay the fee. De Haan recalled that she witnessed the effects of the gym and expressed that this was a chance for students to make a big impact.

“I think for the older kids it was really great leadership building and learning how to be in a community, a little bit more than they are taught,” she said. “For the little ones, it’s just fun. They go to school and play outside, and that’s what they do. There are a lot of rough crowds they can get into. It’s not a very violent community; it’s just not a very great community in a lot of ways. You could just see how much they loved what they got to do there.”

For more information on how to get involved, students can visit https://www.facebook.com/helpkidstoclimb/ or talk to Rachel De Haan.