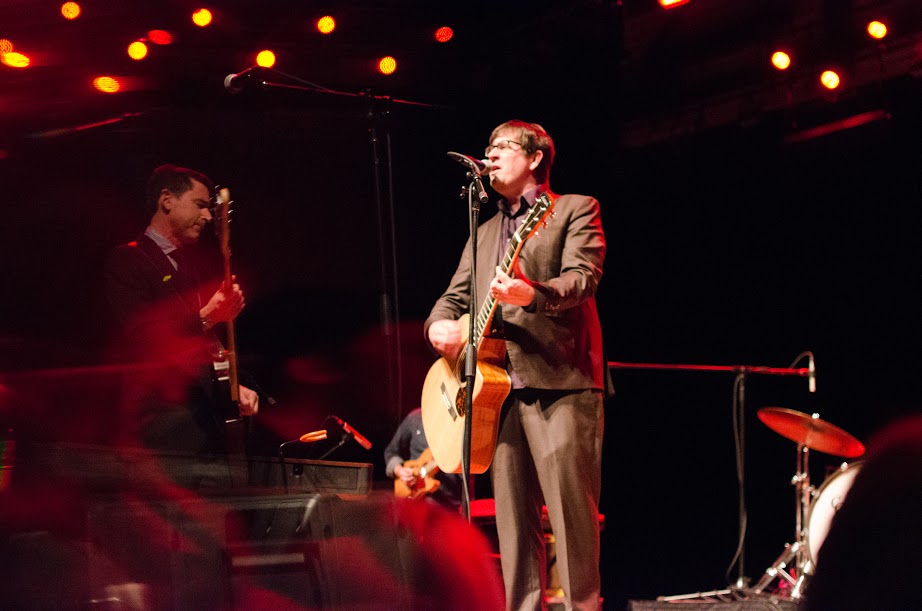 This past Thursday night, as part of the Festival of Faith and Writing, a prominent indie-punk-humanist group, The Mountain Goats, performed a concert to a three-quarters-full CFAC. The crowd was made up of scattered pockets of Calvin students, filled in by a crowd of mostly 20- and 30-somethings.

In the past few years, The Mountain Goats have toured as a quartet made up of constant front-man John Darnielle (playing guitar and keys), bassist Peter Hughes, drummer Jon Wurster and multi-instrumentalist (saxophone, electric guitar and keyboard) Matt Douglas. Instead of strictly supporting their most recent album, “Beat The Champ,” The Mountain Goats played a fair set consisting of songs from the mid to late portion of their catalogue. Darnielle’s giddy nature was evident throughout the performance as he trotted from one side of the stage to the other, aggressively tapped his leg to the beat and even twirled around and removed his glasses during the moving, hopeful ballad “Never Quite Free” (part of the encore).

Five songs into the set, Darnielle dismissed the band, playing alone for three softer, slower songs — two at the piano, one on guitar. This was very intimate and moving as it allowed Darnielle to showcase the more contemplative nature of a significant portion of his songwriting catalogue. After these three songs, he invited the band back for the remainder of the set. The show seemed to be a nice mix of soft and boisterous songs, a delicate balance of bombastic and thoughtful.

The best song of the night was “The Young Thousands” from the 2004 album, “We Shall All Be Healed.” The song started soft but built momentum and volume until the strong conclusion. Hope is embedded in this song, as demonstrated by the lines, “There must be diamonds somewhere in a place that stinks this bad / There are brighter things than diamonds coming down the line.” Darnielle sings about finding hope and beauty in every situation and about believing that the coming future will be even brighter.

The audience was attentive and quiet throughout the main set and remained seated until the encore. At one point during the encore, Darnielle commented on the fact that the audience sat for the main set, saying, “We never had a manager for the longest time. But then, when we first got a manager, a number of years back, he said, ‘There’s going to come a time when you start playing seated venues.’ and I said, ‘No way! We’re punk rock! Sitting is for old people and we’re going to be young forever.’” This comment is indicative of the kind of biting, sarcastic and self-aware persona Darnielle embraces when on stage.

During the final song, Darnielle left the stage and sang “Spent Gladiator 2” among the audience. It is a song that encourages, even demands, that its listener fight for life despite opponents on every side. It felt right that Darnielle would sing it among us, making himself one of us and making us feel less isolated and alone.