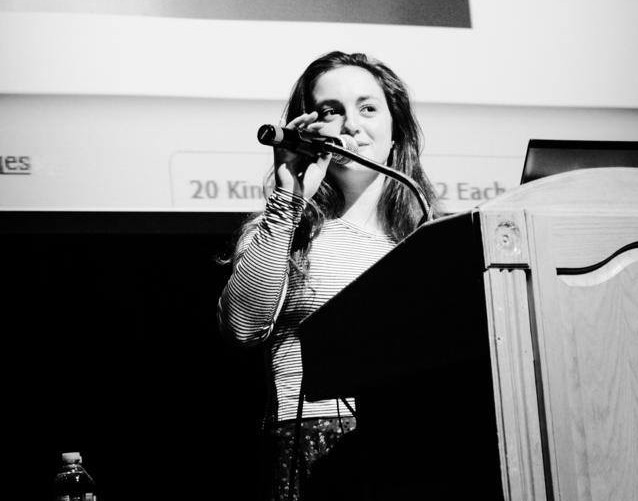 This past January, first year student Morgan Anderson was thrilled to be able put a new book on her shelf.  This newly published book was one which Anderson knew very well, familiar with the ins and outs, knowing every page, understanding each word because this was Anderson’s own published book, “Ascend,”  that she had been working on for almost two years, following the publishing of her first book, “Avian,”  in 2014.

Anderson, a English writing major, has been intrigued in books ever since she was young, delighting in her ability to speed through books. After spending much of her free time in a world of stories, Anderson experimented with idea of becoming an author herself.

“I’ve loved to read for as long as I can remember, always eating up words, sometimes devouring books in mere hours, let alone days,” wrote Anderson on her Facebook page. “Storytelling in whichever shape – film, written prose, spoken words, etc.- is something I’ve grown to cherish. Naturally, growing older, I wanted to write my own story someday, and try to rival that of ones I love dearly.

After the spark ignited in her head, Anderson took off writing her first book in seventh grade. By sophomore year, Anderson resolved to write a page a day.

Anderson found a self-publishing company, AuthorHouse, and was able customize her book by designing the cover, choosing the font and deciding where the page numbers should go.  Apart from arranging the specifics, Anderson found surprises in her writing journey.

“[Writing a book] was a great thing to do, but I wasn’t expecting it to be so hard, especially mentally and how much time it took,” she said. “Because not everything is on command. Sometimes it’s like the muse or what you are feeling. Sometimes it just clicks and other times it completely doesn’t.”f

In addition, Anderson ran into some tricky points that she recalled “were learning curves” for her. One such time was after the publishing of her first book when she realized it wasn’t revised, and decided, with the help of her aunts, to edit it and republish it, a lengthy process. Anderson found confidence through her writing experiences and learned to adapt to being an author.

“You make [the book] but it’s not a part of you,” Anderson said. “Differentiating between [the book] and yourself, and recognizing that people who care about you, care for you and not what you do is important. Just like anything, how finding your identity not through your actions but through the people you care about and God.”

Anderson’s first book evolved from a fascination with the idea of flying. The story revolves around a high school girl, Megan, who realizes that she has grown wings has to learn her role in the part of a special society known as “Avians” in the face of turmoil and treachery in the Irenesav government.

“Flying represents gaining confidence in the world and becoming your own person,” she said. “Life is like you are flying: you go through dips and ups and it’s scary sometimes because you can fall, or you can rise really high. It all depends on how hard you work to stay in the air.”

Her next book, the sequel, takes the readers on a journey with Megan as she grows and learns to be independent.

“The second book focuses on her understanding that she is strong but also understanding that it’s okay to rely on others,” Anderson said. “She is more devoted to fighting against the Irenesav government for a bigger cause than herself. It’s more like arriving at adulthood and figuring out what’s really important in life.”

Anderson hopes to continue to use what she has gone through to better her as she continues to write.

“Experiences help a lot in writing because then you can use those experiences and describe them through your writing,” she said. “When you experience more, you are able to write more. You can’t just write. You need to have experiences to write.”

As for the her future books:

“I have a bunch of ideas,” Anderson said. “I don’t know what I am going to write next.”