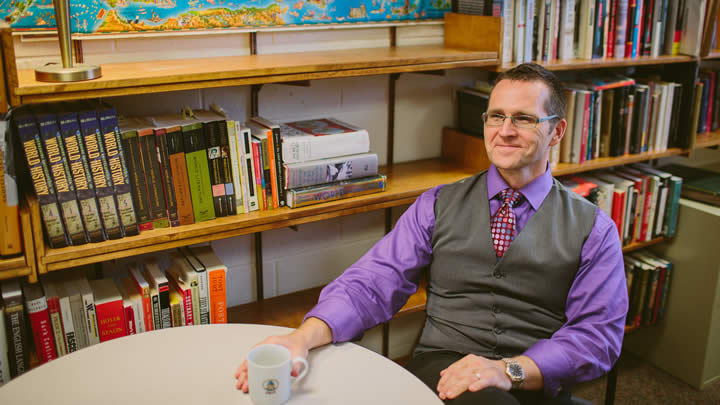 On the night of Wednesday, Feb. 17, Calvin history professor and Honors Program director Bruce Berglund was shot during an armed robbery while walking with his wife in their Alger Heights neighborhood.

Shortly before 8 p.m., as Berglund and his wife, Megan, walked along Alger Street, a man grabbed Megan from behind, held a gun to her and demanded her purse. After pulling away the purse by breaking the strap, the man ran approximately 40 feet to where a second man was waiting. The man who had stolen the purse turned around and fired a shot with a sub-automatic pistol that struck Berglund on the left side of his torso, just below his ribs. The bullet exited from his back. The two men escaped by car.

After being rushed to the Trauma Ward at Butterworth Hospital, Berglund immediately received a CT Scan to determine the path of the bullet. Doctors determined that his injuries did not require surgery. The wounds were cleaned to prevent infection, and Berglund was kept overnight for observation. He was released from the hospital on Thursday afternoon and returned to teach his East Asian history class on Friday.

“Even in the ambulance, I knew that I was going to be OK. I was able to breathe. I wasn’t coughing blood. My vitals were stable. Once I realized that, I said, ‘I’m teaching on Friday,’” said Berglund.

“This was partly because I wanted to get back to regular life. I remember thinking in the ambulance, ‘I’m a teacher and I’m going to teach. That’s what I do.’ But another reason I decided to come to Calvin last week was that so many people were shocked and stunned by what had happened. My wife, Megan, was wise in seeing that the trauma of the event extended beyond our family into our neighborhood and into the communities of people we’re part of. We both realized that it was important for us to go out and see people and show them that we are healthy, that yes, this was a terrible thing that happened, but we are working to get through it.”

The attack shocked residents of the Alger Heights neighborhood, where several Calvin professors live. Berglund said it is an active neighborhood, with many people walking in the evenings, and that this kind of violent crime was very unusual.

“One of the things I was really sad about, even right after it happened, was that this kind of random, violent attack had happened in this neighborhood,” said Berglund. “The people who live in Alger Heights love the neighborhood. It was really unfortunate, that something so unusual and extreme happened there.”

Berglund spent much of his class session on Friday answering student questions about the incident.

“One student asked me if I would have done anything differently,” he said. “While it was happening and the guy was holding a gun to my wife, I was trying to think of something to say to calm the situation. But I didn’t say anything. I didn’t want to say something that would have set this person off and prompt him to respond violently. And that was best. He took the purse and got away. Then he turned and shot me.”

Berglund said that even though his wife, Megan, the former director of grants at Calvin, was not injured in the attack, she has also been suffering from the emotional effects of the traumatic event.

“My wife was the one that was attacked,” he said. “This person was holding a gun to her head. And then she watched her husband get shot. It’s been very difficult for her. We have both been to talk to a counselor because we recognize that this is a terrible event. The difficult part has not been so much the physical recuperation; it has been the emotional recuperation, for both of us.”

Several current and former students have asked Berglund about the event. He said that he’s happy to answer questions and that students have asked very good ones, such as how his four children have responded and how his experience has affected his view of the shooting in Kalamazoo. Of course, students have also asked what it feels like to get shot.

“It didn’t feel like I would have expected,” Berglund said. “It felt like getting hit with a sledge hammer. From watching people get shot in movies or on TV, I had the idea that it was supposed to feel piercing or hot or something like that. It wasn’t like that at all. So initially, I was questioning if I had actually been shot, because it was such a strange feeling of a blunt force rather than a sharp pain. Then I put my hand under my shirt and saw the blood.”

Berglund has also described his immediate reaction to the shooting to his classes.

In the days since the shooting, Berglund and his wife have received many messages of support, including from Calvin staff and faculty members. Berglund has also heard from several former students from his 13 years of teaching at Calvin and his previous teaching position at the University of Kansas.

“To be honest, one of the most emotionally difficult parts of this whole thing has been receiving all of the supportive messages from past students,” Berglund said. “I’m so grateful, and at the same time I’m so humbled. Just the other day, I received a wonderful message on Facebook from a former student, and I just sat in my office and cried and cried.”