Out of the Shadows: Students speak out about mental health disorders at Calvin 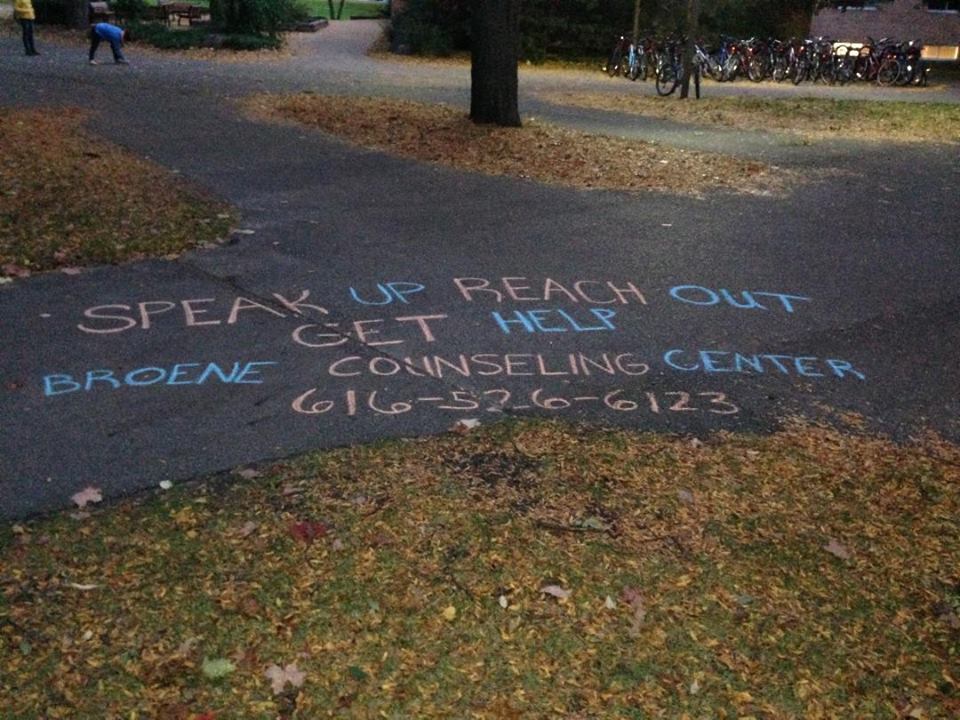 Nearly all of fall semester, there was a statistic written on the sidewalk outside the fieldhouse: “One in four college students suffers from a mental disorder.” Chimes sat down with students and staff members to talk about mental health on Calvin’s campus, a topic that often seems to stay in the shadows. Please respect the courage it took these students, both anonymous (noted with an asterisk) and named, to share their stories by listening with grace.

“Depression is always there”

Emily* is a first-year student with a quick, genuine smile, an honors student who played multiple sports in high school. What’s not apparent at first glance is the four-year road she’s walked with depression, the times she’s been in and out of the hospital, the many different medications doctors have put her on to help her handle her illness.

“I was almost not going to go away to college for my freshman year because the depression was getting so bad,” explained Emily. “But I realized that it might be good to get away from my small town, to make new friends and try a new school.”

Emily said the transition to a higher-achieving college atmosphere has been difficult, though.

“Calvin is so competitive, and it’s really hard to compete at a high level when you’re going through this because you can’t leave your own head for a day. Depression is always there.”

At Calvin, she’s not as close to her usual support system, she’s had to switch psychiatrists and she doesn’t feel comfortable being open with people at Calvin about what she’s facing.

“I’m just another student on campus, and all my friends here, who I’d say I’m pretty close to, have no idea what I’m going through,” said Emily.

“My friends would think that nothing’s wrong with me, but there is something wrong, and I feel alone a lot of the time. It’s hard to share our weaknesses or faults with others because it seems like everyone else here has it all together and is doing really well, and it just makes me feel like I’m a failure.”

“We need to talk about this”

“We have this mentality that you shouldn’t tell anyone about your problems; you deal with them yourself. If you can’t do that, you’re weak and people will pity you.”

Abby has actively dealt with anorexia since her senior year of high school when she began to lose weight in ways that became increasingly unhealthy. She would often eat fewer than 500 calories in a day and frequently over-exercised. The idea of the “freshman 15” terrified her, and instead of gaining that weight her first semester at Calvin, she was determined to lose it.

“Things came to a culmination freshman year when my roommate found me on the floor of the bathroom, fainted, because I hadn’t eaten enough food for the past week,” Abby said. “I began going to Broene and they helped me stop acting on my anorexia, but it never really goes away. It’s a daily fight for me not to act on it.”

Abby joined a “love your body” support group, which she said was encouraging, but mentioned that members of the support group were never comfortable acknowledging how they knew each other when they ran into each other in a different environment.

“We’re supposed to be adults now. We’re supposed to have it figured out. And having a mental illness does not qualify as having your shit together — and that might be part of why we’re reluctant to look for help.”

Johnson explained that there are a lot of misconceptions surrounding mental health disorders and what they look like.

“I was hospitalized for being suicidal earlier this year, and when I went back to work, all my coworkers were surprised and said they had no idea because I seemed so happy all the time,” said Johnson.

“When you think of depression, you expect someone who’s quiet and wearing all black. I’m an extrovert and bubbly, so people don’t think that I could have depression.”

In fact, Johnson has had anxiety and depression for the past eight years, and doctors are in disagreement about whether to diagnose her with bipolar disorder or borderline personality disorder as well.

“Every doctor has a different opinion, which is frustrating,” she explained.

Johnson is vocal about sharing her story — through conversation and through writing — because she hopes it will encourage other students to do the same.

“I just wrote a blog post about what it’s like to be in the hospital when you’re suicidal and what happens because it’s scary and people should know, and I know I’m not the only one who’s experienced that,” said Johnson.

“But I always have these voices in my head saying, ‘Hide that, cover that up. The world can’t know that you were there and that you feel these things and that you’re not perfect.’”

“They don’t know how to respond”

Jessica Somerville, president of “Active Minds,” also talked candidly about her depression, an attempted suicide in high school and the difficulties of communicating this during her first year at Calvin.

“Freshman year, I felt like there was something wrong with me and I wasn’t supposed to be like this. But I’ve realized that it is okay; it’s okay to be depressed or anxious and to get help before you reach rock bottom, and that’s something I’m still learning.”

Ana Van Lonkhuyzen, a senior elementary education major, talked about the difficulty of explaining depression to friends at Calvin.

“It’s so hard for other people to understand depression. I don’t hold that against them because if you haven’t experienced it, it’s hard for you to truly empathize,” she said.

“To have a chronic depression that you know is going to be there every day for the rest of your life, every minute of every day, can be really hard for other people to understand. I think it sometimes scares them because they don’t know how to respond.”

Van Lonkhuyzen explained that last fall, when she was really struggling with depression, it was frustrating when friends tried to fix her or make her better, even when they had the best of intentions.

“I think this is true for most people with depression; when they talk to someone about it, they don’t want you to make it better, because they know that you can’t. They just want you to be there with them and to take it on with you, so they don’t feel alone in it,” she said.

While depression, anxiety and eating disorders are some of the more common mental disorders, it is important to acknowledge that there are others that are often overlooked.

Phillip May, a junior member of “Active Minds,” was diagnosed with Obsessive Compulsive Disorder (OCD) when he was four years old.

“It started with random fears, and I used to have panic attacks a lot as a kid,” explained May.

As a child, he was so afraid of thunderstorms that he wouldn’t go outside if there was a cloud in the sky, and he had certain rituals, such as knocking on wood, that he would always follow.

“Nowadays, my OCD is mostly obsessive thoughts, pretty anxiety-driven, and it’s hard to turn my brain off. … I’ve come across a lot of people at Calvin who don’t understand that OCD is something that gets bad enough that you have to take medicine for it,” said May, who has been on medication for OCD since age six.

“With OCD, people are always expecting me to be a neat freak or to have everything in a straight line, and that’s not me. I think that’s one really big misperception — that the common things people think about these mental disorders aren’t necessarily true for a whole bunch of people.”

May added that many of his friends have taken the time to simply get to know him, which is key in understanding and coming alongside anyone with a mental disorder.

“I think mental illness in general is something people often forget about. Physical stuff is something you can see every day, but if you see a person and they seem perfectly fine, you’re not going to remember it’s there.”

“There are resources here”

The Broene Counseling Center and residence life are actively involved in the conversation around mental health at Calvin; both strive to provide support to students who are struggling.

“In the period of time I’ve been here, there’s been much less stigma around coming to the counseling center to receive services,” explained Dr. Cindy Kok, the director of Broene. “In fact, the majority of our referrals come from other students.”

“More students are coming forward with worries about their friends [regarding mental health],” said John Witte, dean of residence life. “There’s more conversation surrounding this, and I think that’s because there’s more prevalence of students who are dealing with these things.”

“We don’t want anybody to feel like there’s nobody to talk to [or that their] only option is to drop out or commit suicide,” said Witte. “There are resources here.”

Kok explained that Broene doesn’t take a cookie-cutter approach toward students who are struggling with mental illness.

“We carefully look at each person and their situation and what it is that they need. We do a lot of work around intense emotions, how students can learn to accept them and manage them and not be frightened by them.”

“Don’t try to fix everybody”

Kok explained the type of community she hopes to see at Calvin, one that listens, accepts and loves.

“My hope is that this would be a community where we can share with each other that we’re dealing with depression or we have an anxiety disorder, and that we would then be open to respond to each other with compassion and care, and to carry hope and offer help for each other,” said Kok.

“I think for a lot of people who are depressed or anxious, they think that this is where they’re stuck, and it’s really important as a community to say no, you’re not stuck here. … Honesty and hope are two big things we can provide as a Christian community — and deep compassion. Don’t try to fix everybody,” said Hulst.

Johnson knows how difficult it is to try to be “fixed” by others, and she is choosing a different approach as she moves forward in a life that is affected by, but not defined by, her depression.

“I’m passionate about being openly broken because I want other people to know I’m not perfect and that’s okay, and I know you’re not and you can admit that. And I want to be someone who people feel comfortable with, someone people can come to and talk about brokenness together and live in that place together, and I wish more of Calvin was like that.”