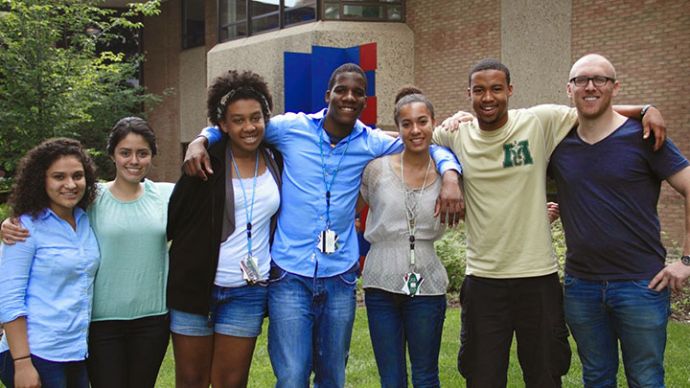 The Entrada Scholars Program at Calvin will now be able to host an additional 25 students due to program supporter Meijer Corporate’s pledge of $100,000 per year for the next three years, double the amount of their previous gifts.

The Meijer Corporation is just one of many donors who aid in the funding of the month-long college preparatory program that takes place every summer during June and July. The donations have allowed more than 1,100 students to receive a scholarship and graduate from Entrada, with 96 percent pursuing higher education, according to Calvin News. Along with being funded to attend the program, participants who choose to attend Calvin are eligible for additional scholarships.

When the program started in 1991, it had a total of 12 attendees. Now, with the increased gift, the program plans to welcome 100 students in 2016. The program’s main purpose is to provide racial and ethnic minority high school students with the opportunity to experience the living and learning aspects of college, specifically focusing on giving the participants the essential skills needed for college entrance and completion, all while earning college credit. Other highlights of the program include group devotions, a trip to Lake Michigan and Entrada talent night.

The director of pre-college programs at Calvin, Nygil Likely, expressed that the college is committed to being the gateway for academically talented students to reach higher education, and Entrada meets that goal.

“We are working to give all students access to higher education, regardless of income, color or creed,” said Likely. “It shows our renewed commitment to diversity and how it contributes to the flourishing of God’s kingdom.”

Likely also added that most of the responses he receives regarding the Entrada Program refer to the academic and spiritual growth that happens throughout the month. Araceli Jaimes, graduate of the program and current Calvin sophomore, expressed how the program is especially preparative for being intellectual and insightful at a higher level.

The program opened up the floor to discussion and testimony involving racial and ethnic discrimination, allowing participants to appreciate the diverse environment, according to Ana Estrella, current sophomore and graduate of the program.

“[Entrada] helped me become more empathetic because while I did not come from much discrimination, I was able to hear stories and feel the hurt of my friends that had gone through situations in which they were faced with ignorance and hate,” she said.

Aside from the academic portion, the program has had highly successful friendship forming capabilities. Sophomore Adrienne Pendery, who completed the program in 2014, shared how being in proximity with persons of similar interests and backgrounds can bring a sense of togetherness.

“As a group, we became really close, a family really,” said Pendery. “When you spend a little over a month together every day — studying, praying, talking, sharing experiences — it is hard not to form meaningful friendships. I made friends that I know I will have the rest of my life, and we kept in contact, even before I transferred to Calvin.”

The friendships, mixed with the intellectually and self-growth challenging activities, paved the way for college success, according to Jaime, and she is proud to be an Entrada scholar.