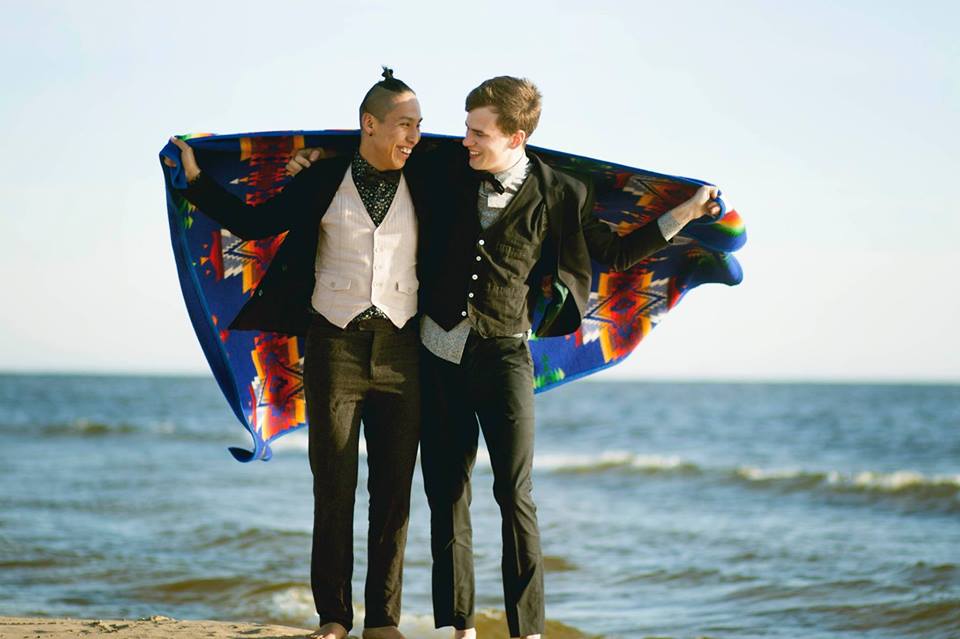 When the Supreme Court decided to make gay marriage legal in all 50 states this past June, Calvin alumni Zach and Colby Roanhorse raced to the Kent County office to be the first to file for a marriage license in the county.

“If you had told me when I was 12 that we would be front page news for being the first married couple in Kent County, I don’t know what I would have done. … I would have been shocked,” Zach said.

Zach and Colby met while living in van Reken, and then they went on the same trip abroad to China. They said that being off campus allowed them to get to know one another better and be together, but when asked when they started dating, the two clarified that they did not date.

“We are from a generation … where gay men don’t date, especially Christian gay men,” Colby said.

Both Zach and Colby struggled with their identities while they were students. But they said they came to the conclusion that God does not desire for them to hide part of their identity at the cost of being a Christian.

“It is often times thought of as a dichotomy — that you can’t be gay and Christian at same time.” Colby said. “God takes precedence in both of our lives … and so trying to reconcile homosexuality and engagement in the homosexual community, which seemed to compromise our beliefs in redemption and in God’s salvation, is something that we’ve struggled with our entire lives.”

Colby recounted the moment when he was sitting in the KHvR prayer room, asking God to show him what he should do, and said he felt the Holy Spirit come upon him:

“[It was] a feeling I can’t explain — I can’t explain that intense peace and reassurance and it was only in the Holy Spirit that I felt it. It was just intoxicating and fulfilling and I knew that I was not in the wrong; I was just simply trying to show who I am.”

Zach said that before he allowed himself to identify as a “gay Christian,” he felt like he was only allowing himself to be a Christian with some of his life. He often asked himself which was worse, lying to everyone and yourself, or admitting who you are.

“When I was allowed to be a Christian with all of my life, it just felt better, and still does,” he said.

After realizing they couldn’t live in a lie anymore, the couple came out together. They both knew that coming out would be difficult, particularly at Calvin. While most people were supportive, it still had a great impact on their relationships and social lives.

“It was isolating and almost seemed like a self-punishment. We were punishing ourselves but trying to be an authentic being,” Colby said.

As a result of the social fallout they experienced, Colby took a year off and ultimately left Calvin, and Zach’s GPA dropped from a 3.8 to 1.5.

When Colby recalled telling his mom, she called them “demons” and said they were “in the wrong,” saying “something was wrong with her womb.”

Colby prayed about his mom, and a few weeks later, she called him back to said that she had read a verse in Psalms about being created in the womb, and “she made a complete turn around.” Colby said she is now open to dialogue and completely supportive of him.

“She just loves us and calls us her sons,” he said.

“Our parents are a fine testimonial example of how simply being around people who are different than you helps ease tension.”  said Zach, whose parents also struggled to understand what it means to have a gay son. “They saw us go from unfulfilled to more fulfilled than we realized we could be.”

Both acknowledged that while coming out was tough at the time, it has been liberating in the long run.

“Now I can’t imagine it any other way, because everyone around us now knows us as ‘husbands’ — and not only husbands, but Christian husbands. They know us as a unit and we’ve been respected as a union,” Colby said.

Both Colby and Zach are active in their church, regularly attending functions and participating in worship teams. They said they really appreciate the ability to be actively involved members of a congregation while not being “tokenized” as the gay couple.

When talking about how the church should act toward LGBT+ individuals, Colby believes that dialogue is essential to understanding different perspectives:

“Dialogue between communities will always make a difference — if not immediately, then further down the road. Simply talking, discussing and sharing without discrimination or fear or hate. A safe space with pure dialogue and pure listening makes a world of difference.”

“Those are very important spaces, but church isn’t supposed to be about our differences. … I understand why we have churches like that, but I don’t think that’s a solution.”

Zach also said that the church acting in hate toward the LGBT+ community is not the answer.

“We didn’t learn how to be gay, … how to be who we are, but hating other people and standing behind a pulpit and telling gay people they are going to hell, that is something you learn,” he said.

All in all, Zach and Colby stressed that they are a single couple in a large story and their testimony is specific to them.

“This is a really big issue and we don’t have the answer,” said Colby. “We are small pawns in a big story.”

For students at Calvin who are struggling with being LGBT+ and what this means for their faith, Zach pointed towards resources like the Broene Counseling Center, Pastor Mary or other supportive staff. He also encourages people to “seek out allies” and hold on to any person who is willing to listen.

“The most important point is to stay strong in God, continue praying, continue reading the scripture and continue studying. The more informed you are on what the Bible has to say, what God has to say, the more powerful you will become,” Colby said. “I never thought I could be so strong or so full of courage in such a point in life, but now I care more.”

EDITOR’S NOTE: Calvin College’s official view on homosexuality is the same as the official position of the Christian Reformed Church (CRC). The position found on the CRC website is as follows:

“Homosexuality is a condition of disordered sexuality that reflects the brokenness of our sinful world. Persons of same-sex attraction should not be denied community acceptance solely because of their sexual orientation and should be wholeheartedly received by the church and given loving support and encouragement. Christian homosexuals, like all Christians, are called to discipleship, holy obedience, and the use of their gifts in the cause of the kingdom. Opportunities to serve within the offices and the life of the congregation should be afforded to them as to heterosexual Christians.

Homosexualism (that is, explicit homosexual practice), however, is incompatible with obedience to the will of God as revealed in Scripture. The church affirms that it must exercise the same compassion for homosexuals in their sins as it exercises for all other sinners. The church should do everything in its power to help persons with homosexual orientation and give them support toward healing and wholeness. A synodical report titled Pastoral Care for Homosexual Members is available at www.crcna.org/SynodResources.”

Please note Chimes’ commenting policy. The purpose of this  feature is to share the story of members of the Calvin community and their experience. We do hope it fosters dialogue among the community, but we ask that comments and discussion focus on the issues, and not the two individuals telling their story or individuals expressing their opinions. Our official commenting policy states that Chimes reserves the right to remove comments that contain the following material:

Language that disrespects or abuses anyone on the basis of race, sex, orientation, religion, or other diversity
Ad-hominem attacks
Profane language