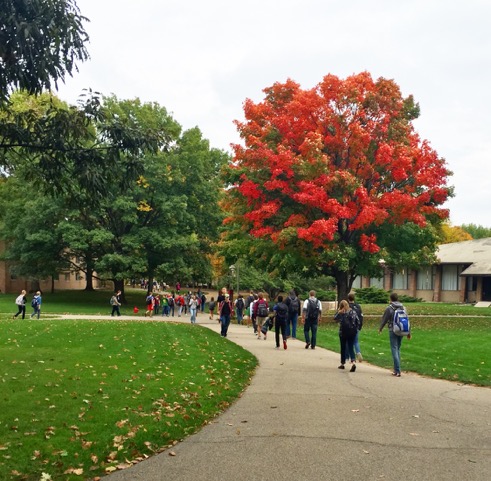 Each year, about 130 first-time students decide not to return for a second year at Calvin. In an effort to reduce this number, the president’s office has identified improving first-to-second-year retention as one of two college-wide goals for this academic year, along with increasing student recruitment.

Since about 56 percent of Calvin’s total operating revenue comes from net tuition and student fees, one motivation for increasing retention is improving the school’s current financial situation. However, Todd Dornbos, director of retention, said that efforts to improve retention are not only a budget issue.

“It’s certainly something that’s related to finances, but we’ve also been thinking about retention long before that,” Dornbos said.

Retention, said Dornbos, has to do with how well students adapt to the college environment and how well they are welcomed.

“If students are successful in that first year and come back for a second year, they’re much more likely to succeed in any college.” We know that retention will not be 100 percent, said Dornbos. “Some [students] are going to other schools and succeeding, and that’s a success for Calvin too.”

Dornbos emphasized that Calvin already has a fairly high retention rate compared to its peer institutions, especially given its relatively open admissions policy.

“We attract students from the whole academic spectrum,” Dornbos said. In a newsletter for the provost’s office, he wrote that the retention committee’s goals are “derived from the committee’s long-term assumption that every admitted student should have an opportunity to thrive at Calvin.”

In his newly-created role, Dornbos is leading the task force that will develop a tactical plan by the end of January for increasing student retention. Calvin’s goal is to increase the retention percentage from the current 86.6 percent to at least 90 percent by fall of 2022.

The retention project created four teams that have been working simultaneously throughout the semester. According to the project charter, the data and assessment team is working to identify “key risk factors” that lead to students leaving Calvin. The best practices team is studying retention strategies used at other institutions, the coordinated care team is developing a “cross-divisional” system for caring for at-risk students and the strategies team is determining specific ways for Calvin to improve student retention.

According to Dornbos, one crucial consideration for discussions about retention is the changing demographics of Calvin’s student body. Calvin’s historical core student populations — children of alumni, CRC students and Christian high school students — typically know better what to expect in their first year at Calvin than other groups.

“As we become a more diverse place — which we celebrate — we have to take seriously what it means to help students acclimate to the college,” Dornbos said.

Dornbos said Calvin doesn’t currently have a complete understanding of why most students who leave after their first year do so, despite the use of an exit survey.

“[Students] are often really quick to say ‘Oh, it’s too expensive’ or ‘It’s too hard.’ … There’s probably more nuance to that.” Discovering this nuance is the primary task of the data and assessment team.

The most important role for students in this project, Dornbos said, is organized communication about anything that might need to change at Calvin in order to make it a more welcoming place. Dornbos said he would look toward student senate to fulfill this role.

“What is important to realize,” said student body president Ethan DeVries, “is that students are the life of this college and have a significant influence on the culture and feel of our community.”

DeVries added, “In student senate we believe that we, the student body, share the ownership of making this campus a remarkable and inviting place.”