“We Stand Together”: Calvin College shows solidarity against displays of racism 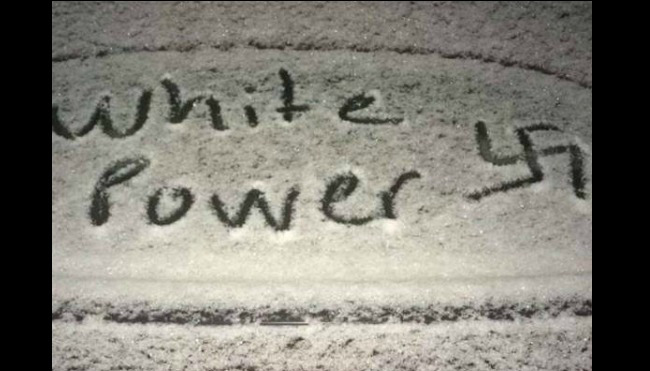 The image of a swastika and the words “white power,” scrawled late Sunday night in the snow on a car windshield, sent shockwaves through the Calvin community.

In a response that students and staff members called “unprecedented,” Calvin administrators quickly organized several gatherings for lament, anger, prayer and calls to action. President Michael Le Roy asked for offices across campus to close and classes to be let out at professors’ discretion for a 4 p.m. chapel gathering.

“What I was very aware of is that for some of our students, particularly students of color, the symbolism of the swastika, a symbol of white power, is a reason to feel afraid,” said President Le Roy.

Le Roy and Michelle Loyd-Paige, executive associate to the president for diversity and inclusion, led Monday afternoon’s gathering, which filled the chapel to visible capacity.

Le Roy asked those at the chapel service to stand and raise both hands if they were committed to standing against racism and making any changes necessary to promote a community of inclusion at Calvin. In a visible demonstration of solidarity, the room rose as one. Le Roy then encouraged any students who felt unsafe to turn around and see how many people in their community supported them.

Shortly before 11 p.m. on Sunday, a resident of 2nd van Reken reported that the phrase “white power,” along with a swastika, had been drawn in the snow on the windshield of a car in the KHvR parking lot.

Kurt Delos Trino, a junior and resident assistant on the Grassroots floor, went to the parking lot along with the student. The swastika had already been erased, but several other cars’ windshields still displayed vulgar language and phallic symbols.

Delos Trino and the deskie on duty, junior Abigail Brinks, contacted campus safety, the resident director and assistant resident director of KHvR, and Jay Wise, the assistant dean of residence life. Campus safety came quickly to the scene to investigate. Meanwhile a picture of the swastika on the windshield went viral over social media, garnering attention and responses from those in the Calvin community.

Delos Trino then contacted Vice President of Student Life Sarah Visser, Loyd-Paige, residence life staff and the chaplains, among others.

“I went all-out because this is a big deal and isn’t something that should go by unnoticed,” said Delos Trino.

“I wasn’t shocked [by the writing on the cars] because I have experienced microaggressions here on campus that I’ve just learned to brush off. But something like this, that affects not only me but also my residents and so many others, meant something needed to happen. This isn’t okay,” said Delos Trino.

Brinks is grateful that Delos Trino, campus safety and the administration took this incident so seriously.

“I am glad that the students who decided to report it saw this incident for what it was: a harmful, damaging message that Calvin College should not and will not tolerate,” said Brinks.

At the 4 p.m. chapel service, Le Roy announced that the students responsible for the racial graffiti in the snow had been identified via the video surveillance system. Both students confessed and expressed remorse, and they will face disciplinary action in line with Calvin’s “safer spaces” policy.

Though they will remain anonymous, Le Roy charged the community to show these two students grace and forgiveness, while not minimizing the anger that students should feel towards the sin of racism, of which we are all guilty. Referencing the aftermath of the shooting in a Charleston church this June, he emphasized that as Christians we are called to forgive those who hurt us and to respond with “grace and truth.”

The multicultural student development office (MSDO) organized a “time of lament and discussion” at 2 p.m. in the Intercultural Student Development Lounge, which over a hundred students, as well as Visser, Le Roy, and Chaplain Aaron Winkle, attended. That evening, residents of Knollcrest East were invited to an additional time of processing and reflection within their community, and meetings were also held in each of the residence halls.

In these meetings, students had a chance to express deep anger and frustration, as well as their hope for what the future could look like.

“At the 2 p.m. meeting, some feelings expressed mirrored my own. Feelings of outrage, feelings that we need to be doing more, feelings of disappointment and anger and questions about belonging,” said Loyd-Paige. “I was hoping that this meeting would provide a safe space to vent, to express feelings of anger, but also a time to think about our response.”

Loyd-Paige also said that students were grateful that Le Roy took the time to show up in person and listen to their stories and concerns.

After the 2 p.m. meeting, Winkle led a group of white majority students to write messages like “love and justice” and “equality” on snowy cars.

“We wanted to have some way to respond, to voice our disapproval about the messages that went out last night … to make sure that the students here who feel unsafe know that they’re cared for, that this isn’t something they need to carry alone,” said Winkle.

Many individuals expressed frustration over certain sentiments that had been communicated online through social media, including suggestions that the community was overreacting.

Junior Andrew Darmawan agreed and explained the need for more discussion around topics like this.

“There needs to be an intentional movement where we can get uncomfortable and not let the West Michigan ‘nice’ define the way we deal with justice issues,” said Darmawan.

Brinks echoed Darmawan’s concern over some students’ unwillingness to engage with difficult issues.

“Ignorance may be bliss,” said Brinks, “but not everyone has the luxury of choosing ignorance. I am choosing to stand for those who don’t have that choice.”

These conversations have not been limited to impromptu gatherings of passionate students. Monday evening, student leaders across campus gathered to talk about and address the incident as well as larger issues of race on Calvin’s campus.

“All the RAs came together and talked about how we as leaders and individuals can react to this problem and have the tools to be able to communicate with our residents. We want to be good listeners and initiate and allow room for conversations to happen on our floors,” explained senior Jesus Delgado, an RA in KHvR.

Reflecting on Monday’s events, Delos Trino was encouraged by the overwhelming response from students and the college as a whole.

“Seeing the administration do something about this, with such a quick response, is amazing. They wiped out their entire day to deal with and investigate this. It shows that they do care,” said Delos Trino.

“Though my heart is heavy, and our campus is full of anger and frustration and sadness, this shows that there is hope and light.”

Students and staff expressed their hope that the discussions surrounding racial issues at Calvin sparked by the situation on Sunday night will continue.

“If we just make this a one-time thing and don’t allow it to carry forward, that will be a huge loss,” said Darmawan. “This unfortunate event actually provides us with a very potent opportunity to turn it on its head and do something really game-changing for this college.”

Moving forward, Loyd-Paige hopes that students will continue to have the space to lament and grieve when necessary.

“As we think about how we can be a more solidified body, how we can stand together against racism or any other kind of oppression that has no place here on campus, we still need to give room for people to say they’re still hurting, and that’s okay,” said Loyd-Paige.

“I know we’re on our way to wonderful, but we need a rest stop here. We need to sit in the discomfort and not be afraid of it.”