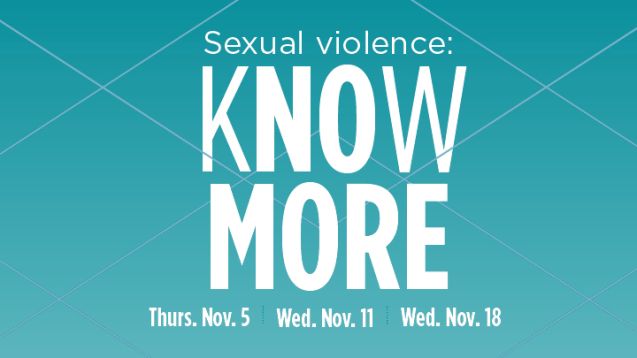 If you’ve experienced an assault, Johnson said, realize you have complete amnesty — even if you were drinking, doing drugs or violating Calvin policies in any other way at the time.

You don’t even have to fear coming in as support for a friend. “We would give amnesty to not only the person who was the victim of this but also the person coming in,” said Johnson.

Johnson explained Calvin’s policy on consent is stricter than Michigan law. “With Calvin,” he said, “if there’s not a verbal yes from start to finish for any type of physical contact of a sexual nature, it is unconsented contact or is an assault, and is a violation of our policy.”

You don’t have to fear telling anyone your experience, Johnson emphasized. Whether you’re reporting a violation on Calvin’s website, or contacting him, SAPT or Broene, Johnson said, you remain in control of the process and what happens next. After you speak with someone, judicial affairs will not go forward with interviewing bystanders or contacting your attacker until you say so — although, Johnson says, if you decide to wait a year, it may be more difficult to get a detailed investigation.

Your information will also be kept confidential by those you share it with. Johnson described Broene as “an ironclad safe of information,” saying counselors won’t even tell him anything about students.

Johnson made it clear you don’t have to fear retaliation from your attacker. Calvin will enact a no-contact policy and forbid them to interfere with the judicial process.

This policy means “you can’t send an email, you can’t send a Facebook message, you can’t contact them in person via third party, carrier pigeon, bird with angry note in its mouth, skywriting. Nothing at all.”

“People have been suspended the same day for retaliation,” Johnson said. “It is that important that people feel safe about reporting things.”

Judicial affairs will prevent an off-campus attacker from coming to campus and, though they cannot prosecute, Calvin will help you file a police report, bringing officers to you if you wish, to prevent the further trauma of visiting the station or rehashing your story over and over.

If you raise an accusation against a faculty member, according to Johnson, the process is the same as with a student. “There’s a policy called Safer Spaces,” he explained. “We may go as far as having that person removed from that class. … They’re under the exact same policies as everyone else is.”

Whoever you choose to talk to will ask, “What would you like to see happen out of this?”

Because everyone defines justice differently, what Calvin and the court system provides may not be enough. “A lot of time the courts may disappoint you. They may not handle the story well,” said Johnson. “But what we’ll do is make sure we’re careful and thoughtful about the process that we have control of and you have control of and make sure that person is held accountable and you are supported.”

The next event in this series is a Women’s Self Defense class, taught by professor Nancy Van Noord, on Nov. 18 from 3:30 to 4:30 p.m. in the Commons Annex Lecture Hall.