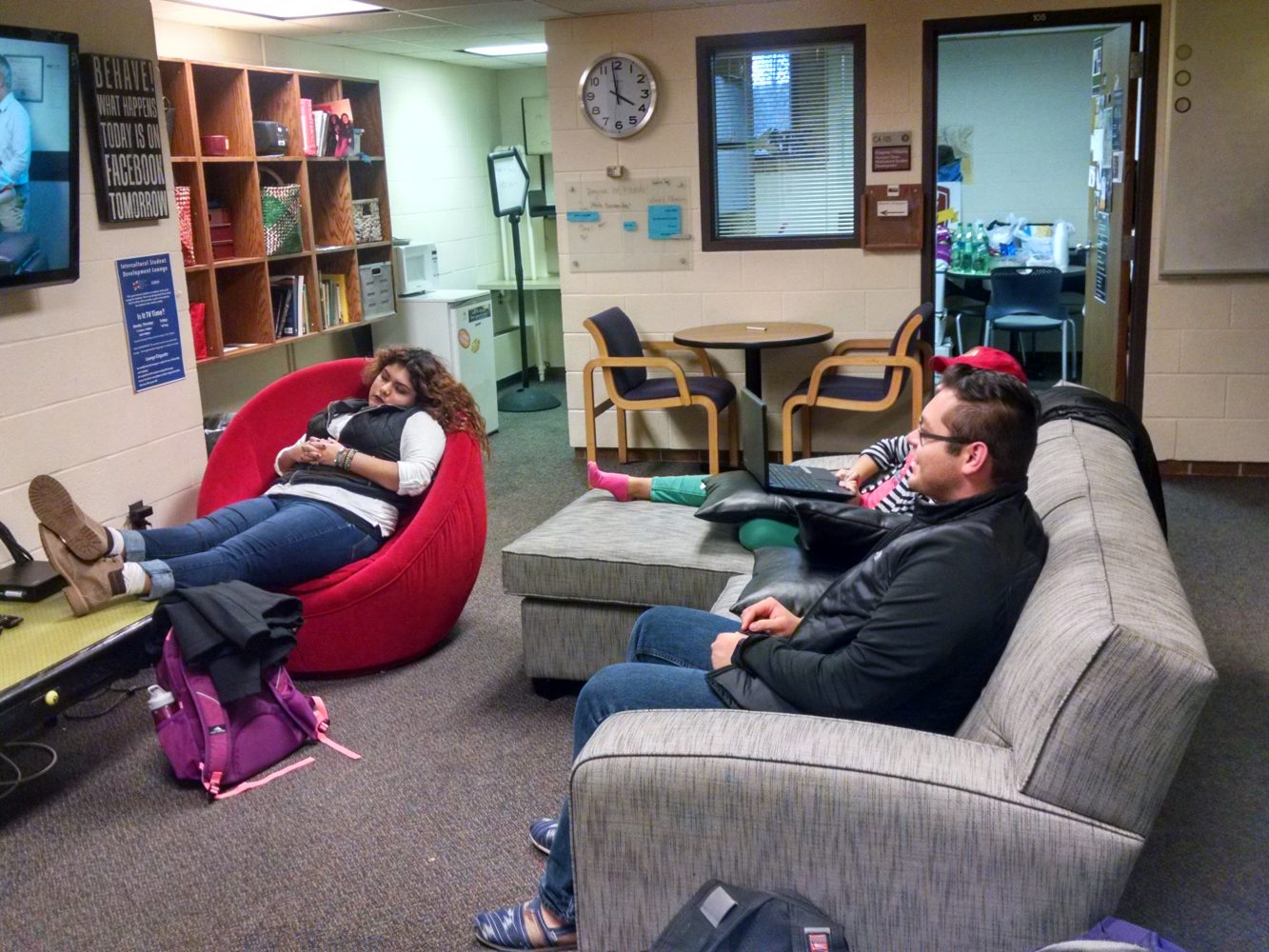 Kjh-Lajhni Sanford leaned forward earnestly in her chair, her voice cutting clearly through the background hum of activity in the Intercultural Student Development Lounge.

“One thing that a lot of minority students face is dealing with questions about their experience, and they don’t always know how to discuss that in a way that other people can understand,” she explained.

Sanford, a senior, has experienced these questions and tensions first-hand as a biracial student at Calvin.Through the International Student Development Office (ISDO), she has been able to connect with other students facing similar challenges.

“Affinity groups [run through the ISDO] are a place where minority students can come together within their ethnic group and stay in a racially safe place,” said Sanford.

However, until last year, there was no affinity group at Calvin that specifically served biracial or multiracial students. Kieychia Likely, the administrative assistant for the ISDO, saw that gap last fall and stepped in.

“I talked to Christina Edmondson, the dean of Intercultural Student Development, and we brainstormed what it would look like to add an affinity group that serviced that particular population. That’s how BLEND was born,” explained Likely.

Sanford, who is a student leader in the affinity group, agreed that BLEND was a needed addition to the ISDO’s programming. “As a student here, I had also seen this as a gap. I’m half black and half white, so before BLEND my affinity group was Sister to Sister [the fellowship group for African American women],” said Sanford. “But even going there I felt a little bit of a divide. Even though I do identify with those ladies, there are things that I experience that they don’t experience because they’re fully African American.”

Each fall, Likely and the student leaders of BLEND get a list of the first-year students who identified as being of mixed race on their admissions applications. They then send out invitations to those students, encouraging them to get involved in BLEND by coming to meetings or events.

“We do a lot of programming geared towards building friendships, especially for the incoming freshmen every year,” said Sanford. She referenced Calvin’s low retention rates for AHANA (Asian, Hispanic/Latino, African and Native American) students and said that she hopes relationships built through BLEND can serve as a way to change those statistics.

“We’re bringing freshmen into BLEND who are then introduced to sophomores and juniors and seniors. They have a chance to share their story and share the experiences that they’ve had coming into Calvin from high school …  and though students might not identify exactly with [each other’s] experience, at least they understand where they’re coming from,” said Sanford.

“We have some students who are half Asian, half Hispanic or half Native American who come to our affinity group as well, so we’re trying to figure out where we all share that same dialogue.”

BLEND’s programming varies widely, involving everything from movie nights to group bowling to events with other affinity groups. Typically, BLEND hosts one event or meeting per month, but they’re hoping to increase that number, according to Sanford. It’s not just about the Chipotle, though, Likely explained. “BLEND is much more than just eating and fellowshipping. We also do book clubs, we watch TED talks, we care about the person as a whole. We want [students] to have fun but we want to be able to instill in them things that will carry through beyond Calvin.”

Sanford hopes that BLEND will also encourage thought and dialogue between different racial groups on campus. “I see BLEND as being part of a bridge, a bridge between being a minority student on campus and being a white student on campus. …  I hope that [through these conversations], students who identify as white will see that even in half whiteness, there is a struggle.”

And Likely is encouraged by the dialogue she sees at Calvin regarding race right now. “We’re having conversations that need to be had. We’re trying to address hard things, and I think we’re moving in the right direction.” She also explained that, toward the end of last year, multiracial students started bringing roommates and friends who didn’t identify with a particular affinity group to BLEND events, which was encouraging because it was another way to open doors to important conversations.

For Sanford, one of the biggest rewards of being part of BLEND is seeing the way students grow from the time she first meets them. Because many students are involved with BLEND throughout the year, BLEND becomes a community in which they can thrive. “I see students who are now able to voice things they were maybe never able to voice before, because they never felt comfortable. Just seeing them grow and their self-confidence increase is incredible for me.”

Likely agreed that seeing BLEND grow is rewarding, because it is something she is passionate about, and she remembers to keep a sense of perspective when looking at the community. “This is something that precedes ourselves, and it’s a foundation that’s being laid for future students at Calvin.”