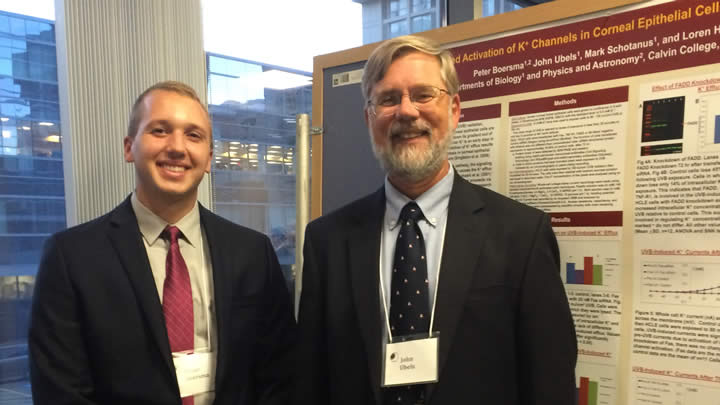 Calvin College biology major Peter Boersma had an opportunity to present his research on the human cornea on Oct. 16 and 17 at the 29th Biennial Cornea Research Conference at Harvard Medical School.

Boersma’s research focuses on the corneal epithelial, or outermost, cells of the eye.

“We know that UVB radiation induces a rapid loss of potassium from corneal epithelial cell,” said Boersma. “We also know that a key initial step in apoptosis, a.k.a programmed cell death, is the release of intracellular potassium from the cell. Through previous studies Professor Ubels has shown that by inhibiting this loss of potassium the number of cells that undergo apoptosis can be lessened.”

What is unknown is the signaling pathway that UVB radiation triggers the rapid loss of potassium.

Therefore, his research focuses on “determining the signaling pathway by which UVB radiation causes a rapid release of intracellular potassium from corneal epithelial cells.”

Research for Boersma has included inhibiting specific proteins thought to be involved in this pathway, then measuring the loss of intracellular potassium, and measuring the activation of potassium channels following UVB. This is all done in order to determine whether inhibiting the protein makes the decrease in potassium become less following UVB radiation.

“The data we have gathered indicated the UVB activates the transmembrane apoptosis inducing receptor Tumor Necrosis Factor Receptor 1 which in turn activates the intracellular signaling protein FADD. FADD then exerts an intracellular effect leading to the loss of potassium.”

As for presenting at the prestigious conference, Boersma expressed that it was a lot of fun, yet also “very humbling and intimidating,” since nearly all the people at the conference were either distinguished researchers or students from prestigious schools’ graduate programs. The conference wasn’t confined to only people from the United States; there were others that flew in all over the world for the conference. Totaling about 200 people, the conference was held by the Schepens Eye Research Institute of Harvard University.

In the outcome of this event and research leading up to it, Boersma plans to continue his research for the rest of the school year and summer 2016.  His research will also be presented in spring and summer 2016 at the Association for Research in Vision and Ophthalmology’s annual conference and the Beckman Symposium.