Students share stories via t-shirts through The Clothesline Project 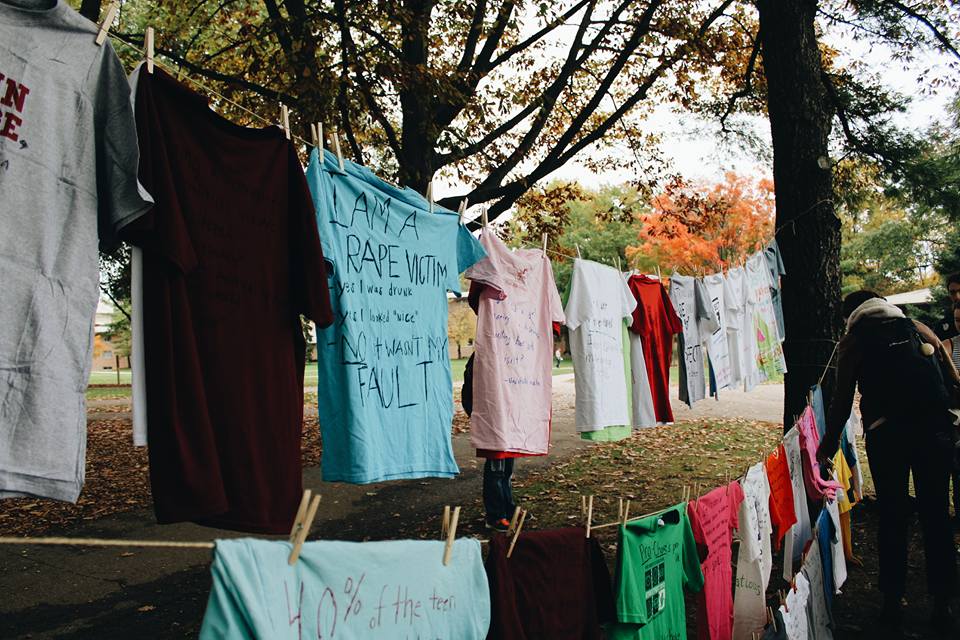 The Clothesline Project came to Calvin’s campus last Wednesday, Oct. 21, sponsored by the Gender Equality Now club. A clothesline was hung between two trees outside of North Hall, where nearly 70 shirts were pinned with student stories and experiences of gender inequality and injustice written on them.

In October 1990, the Clothesline Project was launched in Massachusetts to address the issue of violence against women. According to the Clothesline Project website, the event is meant to “let each woman tell her story in her own unique way, using words and/or artwork to decorate her shirt. … It acts as an educational tool for those who come to view … It becomes a healing tool for anyone who makes a shirt … it allows those who are still suffering in silence to understand they are not alone.”

On Calvin’s campus, The Clothesline Project was made available to both women and men, allowing any and all students to express their honest opinions and personal experiences with gender inequality and/or injustice. Senior Sierra Savela, one of the three co-leaders of Gender Equality Now, said the club is driven to bring more awareness on campus this year and create open spaces to let students share their stories.

Savela said The Clothesline Project is “really powerful because there are things that are cliche and relatable, and then there’s really personal stuff.”

At Calvin’s Clothesline Project event, Savela noticed, “There were quite a few shirts about sexual assault. When people share their story, it takes away some of the shame that’s inappropriately attached to those kind of experiences. It raises awareness and helps people see the hurt behind those types of things. It’s powerful for the people that read and the people that share.”

In regard to Calvin’s campus culture, Savela thinks sexual assault awareness is especially important because she believes “Calvin isn’t a place where people feel free to talk about sex, [so] we also can’t talk about consent. That culture is not good for victims, or future victims, because [sexual assault] happens to one in five women on college campuses. The odds that you will have a friend that it happens to, or that it will happen to you, are so high … It creates a culture that’s not supportive, or victim-blaming.”

Although The Clothesline Project is traditionally focused on women, men were also encouraged to participate in Calvin’s event. Junior Stephan Buiter was one of such participants. Buiter claims to be a feminism supporter because he believes “it’s a pretty important part of our life and society right now. I do see we’ve made large strides, but there’s still inequality going on.” After sharing about a negative experience, he expressed that “because of society, I felt my [struggle] was lesser” when compared to the same struggle of a woman. Buiter believes that society coins “females as having to be this sensitive, subordinate, ‘needs to be dominated’ gender, where men [have] the strong, not emotional, ‘can do anything,’ ‘has to take care of people’ mentality.” He said that he hopes his speaking out on the T-shirt had an effect on those who read it, and that “putting [the experience] out there can potentially give someone else the strength [since] someone else went through that.”

In hopes that this year will be a year of action for Gender Equality Now, Savela anticipates the club will provide more opportunities for Calvin students to tell their stories.

“Everyone has a different story to share,” she said. “Everyone’s experiences are different, and to recognize that not every woman has the same experience, but they are influenced by very similar parts of society, is what’s really important.”