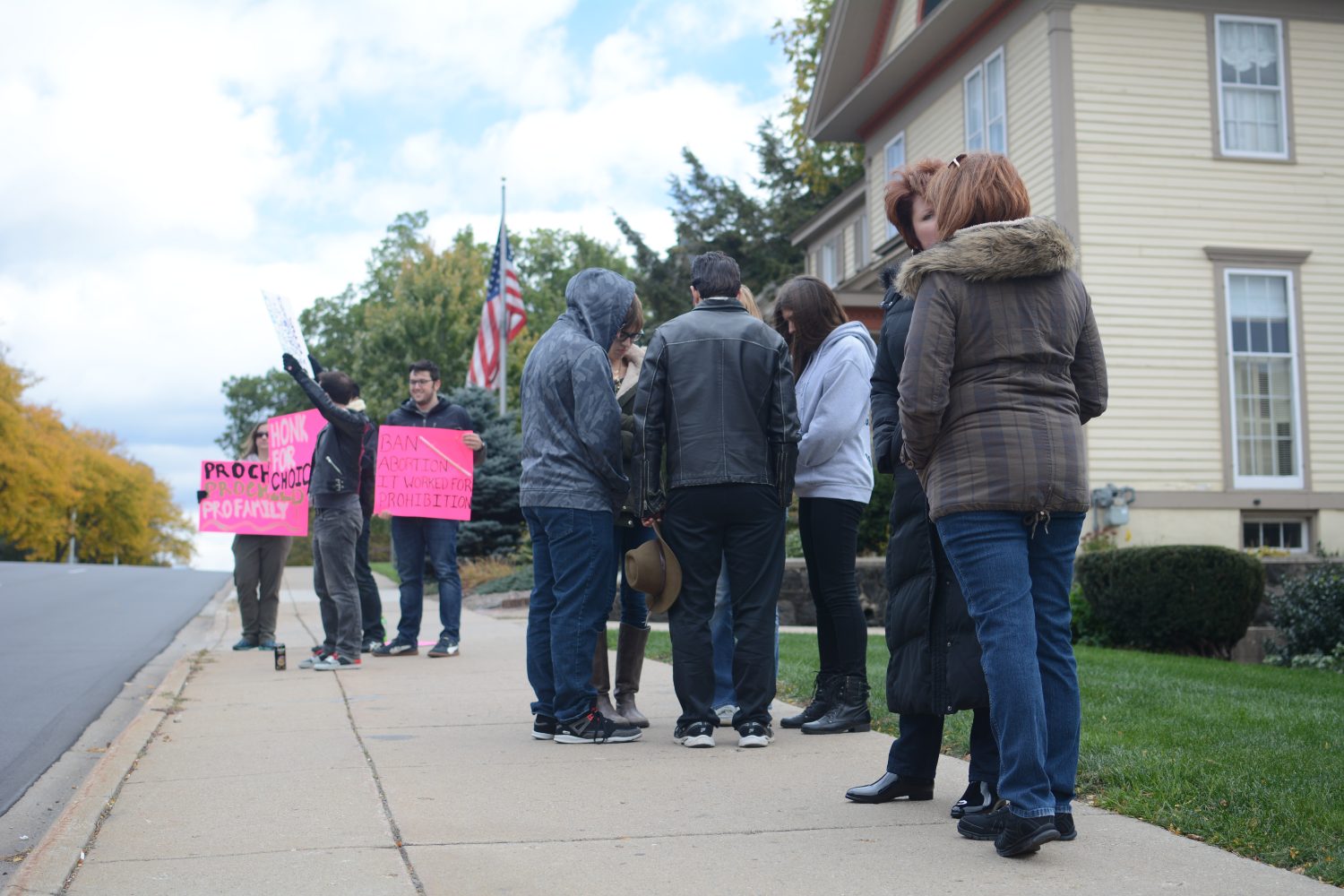 The contrast between the two groups stationed in front of the gray building was stark: one held bright pink signs and waved exuberantly at passing cars, the other huddled in a small circle with heads bowed.

Though they had deeply different convictions on the issue, both groups had come to stand by the Heritage Clinic for Women last Saturday afternoon because they believe that abortion is a topic that should be thought about, talked about and brought to public awareness.
The group circled in prayer was a small contingent from the Calvin Students for Life group, taking an hour-long prayer shift as part of the national movement “40 Days for Life.”

“Between the days of September 23 and November 1, people across the country are getting out and praying for 24 hours solid, round the clock, seven days a week, at abortion clinics around the country,” explained senior Kaitlin Veltkamp, the president of Calvin Students for Life.

“I was contacted by the board head here in Grand Rapids and she asked us if our group wanted to be involved, if we could take an hour out of our time to come here and pray. We emailed back and said absolutely.”

The group standing next to the students, holding signs that encouraged drivers to honk if they’re pro-choice, explained that they were present that day as a direct response to the “40 Days for Life” movement.

“We realized a couple of years ago that October is right to life month, and these people are always out here, and I live right around the corner,” said Owen Curry, a bearded young man in his late 20s.

“I’ve always thought they really are the loudest voice in the room, and if we can just come out here twice in the month and show that not everyone feels this way, we should do that. It’s the least we can do. Sometimes we have to be vocal about it too.”

The Students for Life group and several other community members joining in the prayer movement were at first surprised by the presence of the pro-choice advocates.

“We drove up and saw them standing here and I think our first reaction was nerves. It’s kind of terrifying having someone there who opposes your viewpoint,” said Veltkamp.

“I just pray for them. I don’t know what else to do. I don’t feel animosity or hatred toward them,” explained Holly Vredevoogd, a community member who was present alongside the Calvin Students for Life in prayer that afternoon.

Vredevoogd feels passionate about the pro-life movement in part because she was adopted back in the 1960s.

“My birthmother gave me the opportunity to have life, and now I have children who are teenagers whose mothers chose life for them, and I was able to adopt them. I rejoice in their life and in their opportunity, to see how God is going to use them in this world,” she said.

Cheri Lutke, a Grand Rapids resident and friend of Vredevoogd, explained that religion shapes her convictions on the issue of abortion:

“I feel like this is one of the things that grieves God more than anything else. Women [with unplanned pregnancies] are sometimes so afraid, but there’s help out there for sure.”

It is a shared belief in the power of prayer that unites those who choose to stand outside the gray building on Fulton Street, day after day.

“We really believe that prayer makes a difference, when it comes to this kind of issue,” said Daniel Garcia, vice-president of Calvin Students for Life. “We pray that the hearts of Christians would be moved to reach out and for grace in all of these things.”

The problem is that, while prayer itself does not lie at the center of the controversy, religious beliefs and deep personal convictions split people to either side of the polarized debate.

A member of the pro-choice group on the sidewalk explained that for him, abortion is not a black and white issue.

“There are varying degrees… I would never pick abortion for myself, but I cannot pick it for someone else. Religious views shouldn’t be part of the legislation.”

“And there are a lot of different reasons people get abortions anyways. It should be up to the woman,” added community member Stephanie Brock.

These two small camps of people standing outside, with different viewpoints and personal stories, are a microcosm of a debate that rages on in our nation and in our world. But this debate can be a civil one, said supporters of both sides last Saturday.

“We haven’t gotten into any altercations with anyone out here, nobody’s had anything bad to say [to us], so they’re pretty peacefully doing their thing,” said Brock.

Veltkamp said that ultimately, she was glad that pro-choice protesters had been present as well.

“People who are driving past, whether or not they have a solid opinion, they’re being forced to think about it. When you see a very clear distinction between the pro-life and pro-choice people, all of a sudden people are checking their own hearts and facing the issue themselves.”