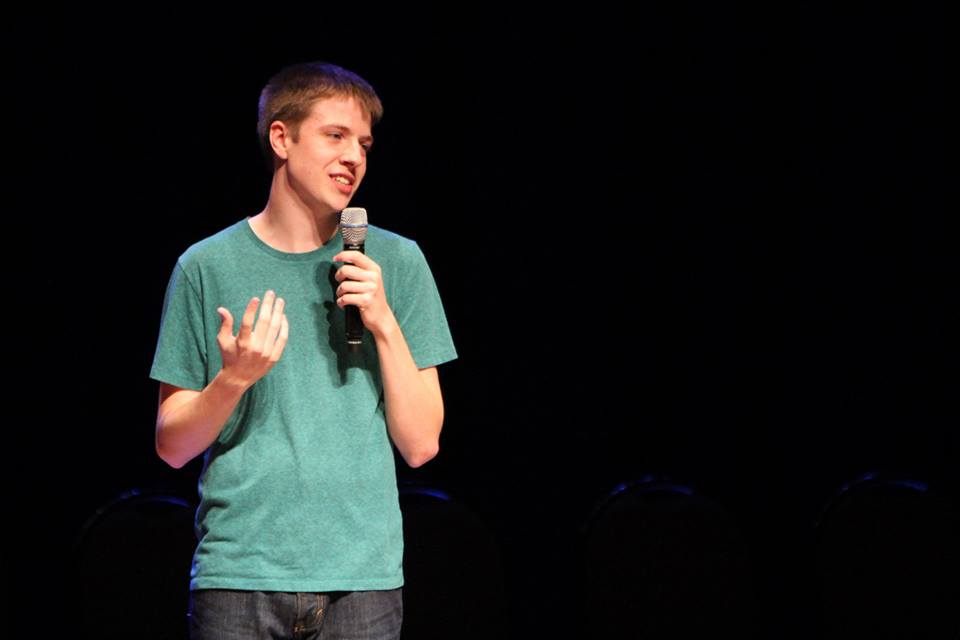 Calvin senior Michael Ribbens, junior Grant Stiles and senior Tyler Vanzanten are the faces of stand-up comedy at Calvin. Chimes asked each of them a series of questions to help explain what it is that they do and hope to do as amateur comedians.

Q: When did you first start writing jokes?

Ribbens: My roommate and I started writing jokes on the door of our dorm room freshman year, just for fun.

Stiles: I started writing when I was a junior in high school. I would write short jokes and draw cartoons in study hall and pass them to friends.It was the early days of Twitter so I would put them up as tweets for my 12 loyal followers. Those jokes built into a monthly homemade zine that I passed out in the public library and comic book store. At 17, I did stand-up for the first time and then last year, at 19, I really started going for it.

Q: Did you listen to much stand-up before you first performed?

Ribbens: I listened to a fair number of comedy albums. I guess it’s like music, where initially you model your voice or perspective on existing pros, and then from there develop your own style.

Stiles: Yeah, I was mostly into a lot of sketch stuff and alternative stuff. But stand-up-wise I watched a ton of Comedy Central. I started doing stand-up initially because I couldn’t find people to do comedy with. Stand-up’s just so simple. You just need a room, a mic and people willing to listen to jokes. It gets pretty lonely sometimes,though. When you bomb you just have to take it on the chin and get back up the next night. It takes a lot of fortitude to face that type of rejection. But the feeling of doing super well (I’ve never really killed-killed) is the best feeling in the world. It’s like being high.

Q: How do you write?

Vanzanten: If I think of something funny, or see or hear something funny, I’ll write it down in my phone then later put it in a Google doc. Occasionally I’ll use an audio recorder when I have so many ideas for where a joke could go that I want to have them be recorded instantly as I come up with them.

Ribbens: If I sit down with the intention of writing jokes, they’re terrible. Humor comes from the sides. I keep a note on my phone of funny ideas that pop up in the course of everyday life, so I at least have a starting point when I realize I have a show tomorrow.

Q: What made you want to try stand-up?

Stiles: One time in an assembly a teacher was admonishing the class for chewing gum at school. He said, “Hey guys, you’re chewing your gum like cows!” and I yelled back, “Cows don’t chew gum.” It’s still probably the biggest laugh I’ve ever gotten. That’s when I knew I had to start performing.

Q: What do you want to do with your comedy, ultimately?

Ribbens: I have no idea what I’m about to do with my life.To use a Mario Kart analogy, I just drove through a box and it’s still cycling through items. It could land on comedian, Chili’s waiter, telemarketer, writer, garbage man …To use Calvin terms: my vocation is a shrug. I love doing comedy, but to pursue it as a living is a huge step that I am hesitant to take. On the other hand, it’s not like I’m going to make money right away doing anything else. It’s not like I’d be turning down a career as a doctor. I don’t know, give me six months; I’ll get back to you on that.

Stiles: I want to be a professional comedian and I want to write comedy for TV shows. I realize that’s an insane thing to say out loud but you need to be a little delusional to pursue such an insane thing. I mean, I don’t really want to be famous or anything. I don’t really care about that. If I could just work a day-job at Walmart and do comedy at night that would be chill too. I just want to do sets and get really good.

Vanzanten: Not sure at the moment. I think it would be fun to move to a city and pursue a career in comedy at some point down the road. Some jokes are better on paper, but I definitely prefer getting instantaneous audible feedback (or lack thereof) on my jokes rather than just posting them on social media. So I think as long as I’m writing jokes, I’ll be performing stand up…

Q: How would you compare performing at Calvin to performing elsewhere?

Ribbens: Calvin audiences laugh generously, which is flattering, but there is also an underlying tension that comes from fear that you might say something offensive.There’s been a lot of hubbub lately about the politically correct culture at colleges, and I think Calvin has some of those issues — well-intentioned as [the college] may be. I think we need comedy to help us relax. If we can’t laugh about our issues, they just stay bubbling beneath the surface. And that leads to gas. Nobody wants gas.

Stiles: I love comedy so much, I’ll do comedy anywhere. I’ve done comedy at bars, pizza places, bowling alleys, coffee shops. The Cave Cafe has been great for me for trying stuff out and doing more experimental stuff. The Cave feels like just a bunch of weird kids going down to their weird basement to do creative stuff. The guys who run it are great.