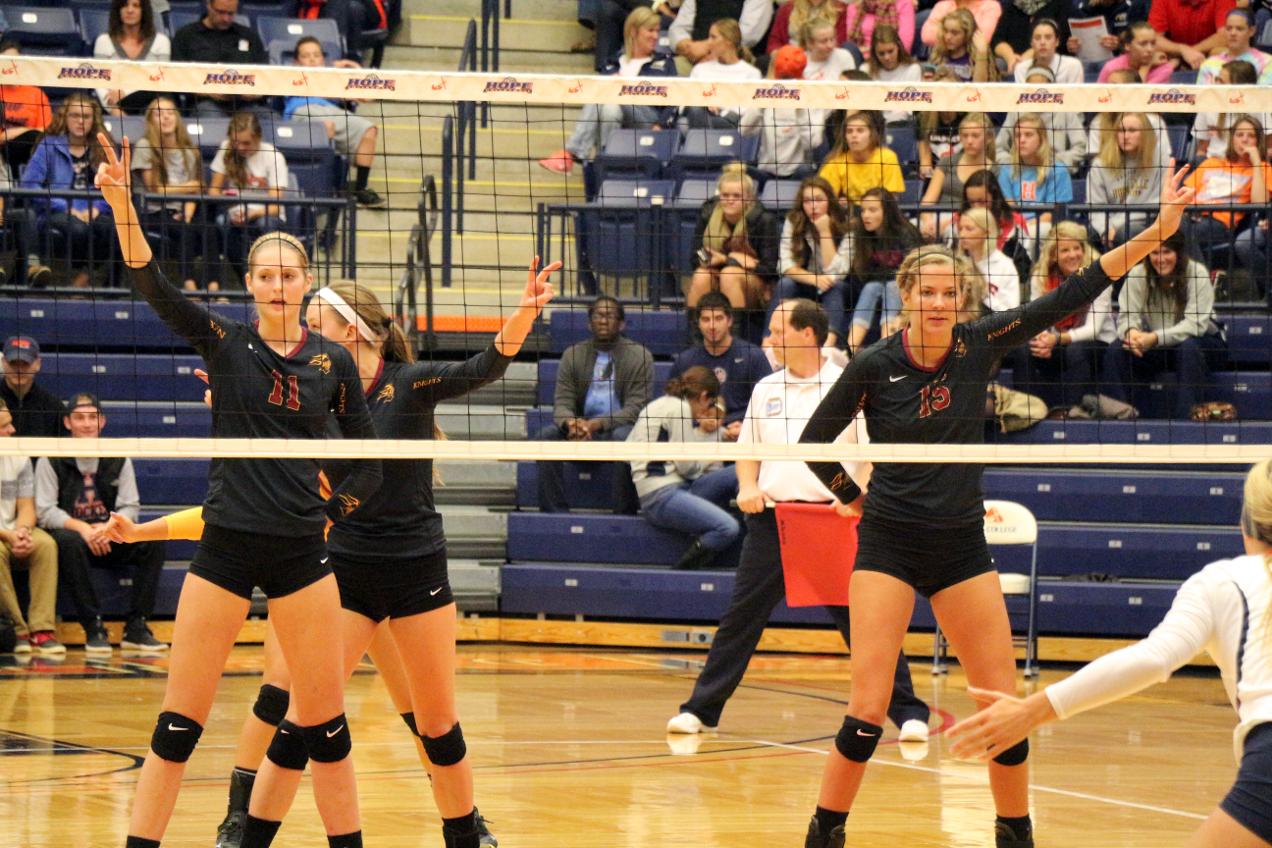 The Calvin women’s volleyball team is undefeated in the MIAA and is 17-3 overall. Calvin is currently ranked fifth in the nation and are first in the MIAA. This past weekend the Knights competed against Saint Mary’s College and Kalamazoo College, sweeping both teams in three games each. They also defeated rival Hope College in Holland on Wednesday, three sets to none.

The Knights faced the Belles of Saint Mary’s last Friday night, defeating them with game scores of 25-22, 25-14 and 25-15. Junior Laura Danhoff collected seven kills in the second set and a total of 17 kills in the match, tying her career high. She was also responsible for 2.5 blocks out of the 8 total.

In the third set, the Knights had a serving streak, led by first-year libero Keilahna Castillo, to put them ahead of the Belles 8-2. Castillo recorded 12 digs for the night, as well as sophomore Jenna Lodewyk, who also acquired 32 assists. First-year student Anna Kamp collected 11 kills Friday night and senior Rachel Lubben collected six, aiding their team victory.

On Saturday, the team traveled to Kalamazoo, beating the Hornets with scores of 25-8, 25-11 and 25-14. The Knights performed very well offensively, collecting 16 aces throughout the match, six alone from Castillo, with a hitting percentage of .350.

“We practice pressure situations a lot, especially serving aggressively in tough situations, and it was good to see our hard work in practice pay off,” said Lodewyk.

Danhoff solely had a .357 hitting percentage, leading the Knights in kills, followed by Maggie Kamp who acquired seven kills for her team. Lodewyk received 24 assists, seven digs and five kills, while Castillo contributed 13 digs defensively and senior Jamie Kooiman had eight. All around, the Knights had a solid weekend offensively and defensively.

Calvin traveled to the DeVos Fieldhouse to face Hope on Wednesday in a rivalry match. Senior Maggie Kamp had 15 kills and Jamie Kooiman and Castillo each had double digit dig totals.

Lodewyk said her team had primarily been focusing on this match in practice, but the Knights planned on treating it like any other. She added, “It’s amazing to see all the support from the community, especially going into a game like this. It definitely carries a new level of energy leading into Wednesday.”