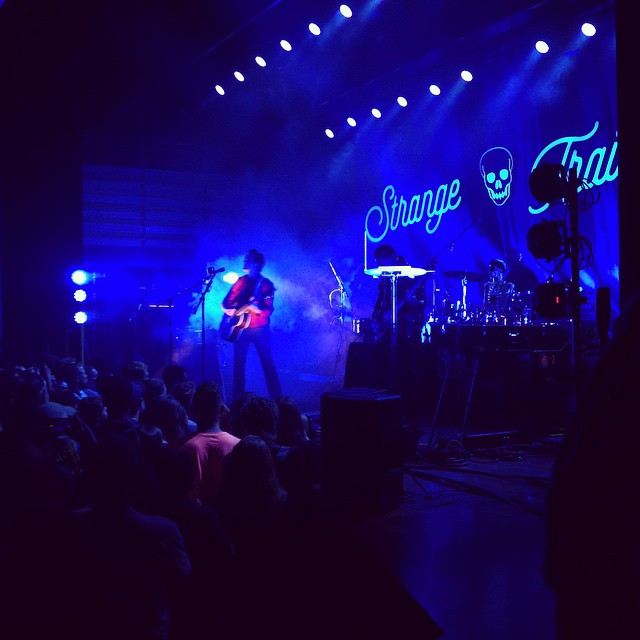 The band’s energy and the crowd’s enthusiasm, amplified by dramatic lighting and smoke onstage, created an electric atmosphere that wowed concertgoers.

“I was really impressed by [the band’s] attention to detail, both musically and visually, especially when the lighting would line up with the drumbeats,” said senior Nicole Reenders.

The frontman of Lord Huron, Ben Schneider, is originally a visual artist, and this was evident in the thematic ties between the stage setup and decoration and the song lyrics and themes.

The band recently released “Strange Trails,” an album pondering themes of love, heartbreak and death, and they played several songs from that album in Wednesday’s concert. Onstage, a skeleton sat atop an amp, and the projected backdrop was a rather mysterious-looking forest, reminiscent of a “strange trail.”

Throughout the concert, Lord Huron utilized quite a range of instruments, including usual instruments like guitars and drumsets, as well as less-used ones, like a harmonica and a theremin, which is an electronic musical instrument operated using electromagnetic waves.

“It was like indie meets rock meets Elvis. It was a really interesting mix that I didn’t think would work right off the bat, but it sounded really cool, especially near the end of the performance,” said Devin Auld, a junior.

“‘Indie folk beach rock’ is the closest I can come to describing their style,” said Luke Tilma, also a junior.

Lord Huron began as a solo project by Ben Schneider, originally from Okemos, Mich., in 2010. The band has gradually gained more members over the last few years and has released three EPs and two albums.

Their music evokes emotions through depth of lyrics and creative musical layering. This was evident in the variety of audience responses, from wild enthusiasm and cheering to more melancholy reflection.

“Lord Huron’s music made me restless, like I wanted to go roam around unexplored frontiers,” said junior Kyle Disselkoen.

“One thing they did was used a lot of repeated lines, and that made the music drive forward,” he said. “You were always anticipating the next thing.”