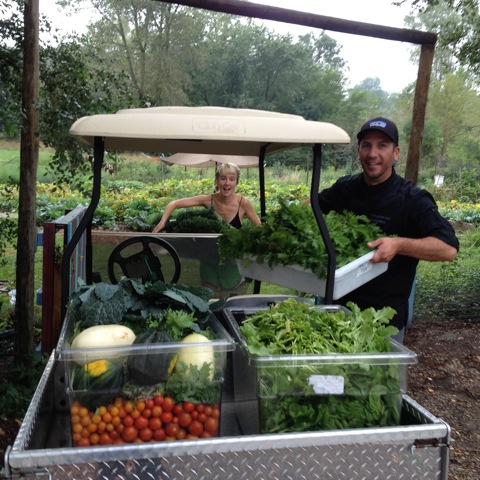 After a recent expansion two years ago, the Calvin College community garden has begun to increase its produce offered in the dining halls. The one acre garden, located adjacent to the Spoelhof Fieldhouse Complex off of Hampshire road, has focused its efforts on growing organic leafy greens, herbs, fruits and vegetables that are now being featured in salads, soups and other dishes in both dining halls.

Last spring, community garden produce entered the dining halls for the first time, but in understandably low quantities as the garden was just being initiated into its new location. Since the expansion in the spring of 2013, the garden managers have focused the past two summer seasons with building infrastructure, like deer fences, herb spirals, raised beds and cages for the garden’s pet rabbit and full-time composter, Cadbury.

Now that the infrastructure is largely in place, garden managers Sunshine (Peter) Cahill and Janaya Crevier have focused their efforts on growing farmer’s market quality produce. The two have worked closely with Catering Executive Chef Ian Ramirez to get produce into the dining halls via a variety of dishes, and have formed a spectacularly effective relationship.

“The relationship between the dining halls, specifically Chef Ian Ramirez, and the garden is amazing. Peter and Janaya approached Ian with the idea of garden food going to the dining halls and Chef Ian embraced it wholeheartedly,” said biology professor David Warners.

The garden offers heirloom fruits and vegetables, many hand-selected by Ramirez for recipes and garnishes. These specialty items would not otherwise be available in the local area for a reasonable price like they are from the garden.

“I was with them from the conception to the present, when they were first talking about doing it,” said Ramirez. “I made a commitment that I would buy 100 percent of what they grow there.  Organic and local food is something we need to be aware of and take advantage of.”

Yet even with producing specialty items, the garden has been able to put out an impressive yield so far. This year, half an acre of land was cultivated, which is twice as much as last year.

From that half-acre, Cahill and Crevier have already made 15 deliveries of produce to the dining halls, a rate five times greater than last year. In the most recent delivery there was around 150 to 250 pounds of produce, Ramirez estimated.

Sourcing food from the garden also allows for some creativity in the kitchen, allowing Ramirez to apply culinary expertise to new ingredients. “Just yesterday they sent me some lambs quarters – an herb used in teas and similar things – and I’ve infused them in oil,” said Ramirez. “We’ve been trying to do some new stuff with what they’ve been growing.”

Last week, students participating in the annual orientation service day Streetfest also got involved in the action, pulling weeds and completing other manual work in the garden.

“We love Streetfest volunteers — they always end up doing more than we hope for,” said Cahill.

But the volunteers had more to offer than just their manual service; they had ideas and a vision for the garden as well. After weeding, they were given time to reflect on the garden and what its future possibilities could be.

Their ideas thrilled both Cahill and Crevier, the senior managers who will soon be leaving the garden and are looking for new managers to fill their shoes. “They have great ideas,” said Crevier. “The garden isn’t just for biology or environmental studies students. Anyone can spend time there and leave closer to each other and closer to the earth.”

In the garden, there is more produce ready to be picked, and Cahill expects to make many more deliveries before the growing season is up.