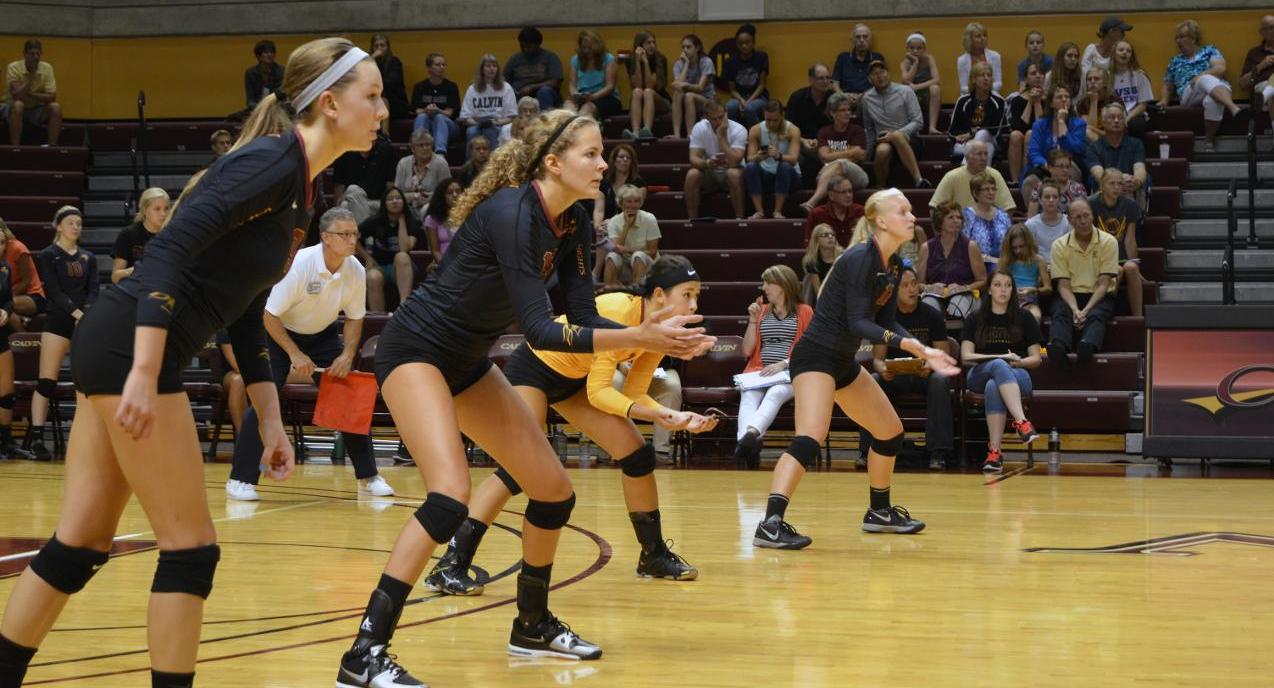 The number two ranked women’s volleyball team closed out the Labor Day Weekend Invitational with well-earned wins against Thomas More College and Pacific University after having split matches the day before, defeating Defiance but losing to Emory University.

In the first match of the tournament, Calvin swept Defiance College 25-8, 25-14, 26-24. The Knights had an 11-point streak in the middle of the first set, earning them a 25-8 win over Defiance. Calvin continued their aggressiveness into the second set, scoring the first six points with the help of two service aces by first-year student Rachel Herrera. Defiance battled in the third set, but it was Calvin who took the win 26-24.

“We were pumped to start our season off with a win, and I think it was healthy for our team to experience a loss early this season,” said senior Maggie Kamp.

The second game of the tournament featured Calvin and No. 1 ranked Emory. All three sets were hard-fought by both teams, with the scores being close. While the Knights were able to win the first set, it was Emory who came out on top for the overall win.

Both Calvin and Emory were formidable during the second set, and at one point the score was tied at 23, giving either team the chance to win. It was Emory, however, who went on to win the set 27-25. Emory continued its winning into the third and fourth set. The Eagles held the lead the whole time in both sets, despite four consecutive kills by Laura Danhoff, Rachel Lubben and Maggie Kamp.

Though it was a tough loss, the Knights are looking on the bright side.

“All of the games this past weekend exposed a lot of things for us to work on in practice for our upcoming games,” said Kamp.

The second day of the Labor Day Weekend Invitational was in Calvin’s favor. The Knights swept both Pacific Lutheran and Thomas More.

Calvin maintained the momentum into the third set. The Lutes were able to chip away at the score, but Calvin came out on top with a score of 25-19.

Danhoff was a huge asset to the Knights’ offense with 16 kills and a kill percentage of .714. Kamp finished with 11 kills, Tessa Van Laare nine, and first-year student Anna Kamp had six.

Against Thomas More, Calvin came out strong with a 7-1 start before the Saints called a timeout. The Knights were able to pull away from the gaining Saints at 17-7, and after a couple of errors on the opposing side, Calvin won the set 25-12.

Sophomore Emily Blankespoor started off the third set with a service ace and Danhoff had a solo block and a kill. The Saints struggled to defend the Knights’ kills as Kamp added two and Calvin pulled the scored to 8-1. The Saints had a five-point run, but it was the Knights who finished with a win.

Kamp led the team with 15 kills, and both Danhoff and Van Laare had eight.

Lodewyk had 25 assists and dug up six balls. Castillo led the players with 13 digs and four assists.

Due to such great performances during the tournament, Danhoff and Lodewyk were named to the Calvin Labor Day Weekend All-Tournament Team.

A year after winning the MIAA Tournament, the Knights began conference play at St. Mary’s on September 9.

“St. Mary’s is our first conference match so we’re excited to put our work in practice into play on the court,” said Kamp. “Right now we’re focusing on one match at a time, and using each match as preparation for whatever the future holds.”