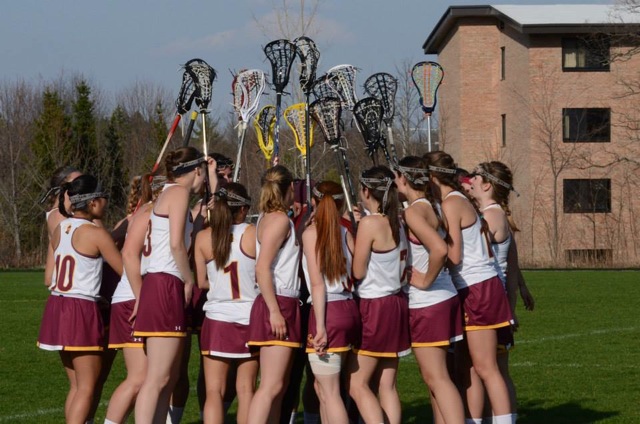 Calvin’s women’s lacrosse team’s season came to an end this past Saturday with a loss to Albion. The playoff game determined which team would appear in the NCAA Tournament. An appearance would have been the first for both teams.

Albion scored the first two points of the game, which gave them a 2-0 lead less than five minutes into the game.

Calvin then responded with three straight goals, two from junior Carolyn Forbes and one from senior Karissa Reed. Despite the Knight’s one-point lead, Albion had the advantage in the opening period.

“Albion won most of the draws and ground balls,” said senior Paige Noordyke. “[They] just had more offensive possessions that they were able to capitalize on.”

The game could have gone in either the Knights’ or Britons’ favor: neither team was ever up by more than two points. It was the Britons’, however, who pulled through in the end to win the game by one point, 11-10.

“We fought hard on Saturday,” said Noordyke. “Unfortunately it did not have the outcome we would have liked.”

Forbes scored three goals and was able to grab three ground balls, while Reed had two goals, two assists and two ground balls. Noordyke and senior Lindsey Ryskamp each had two goals and first-year student Amanda Davio had one goal.

Junior goalkeeper Corry Remy put forth a great performance with eight saves in the game.

Saturday’s defeat put a 10-game winning streak to an end for the Knights. They end the season with an overall record of 12-6.

“We are trying to look back on the season and realize that we had a really amazing season to be undefeated in conference and outright champs,” Reed said.

Despite this past weekend’s loss, the women’s lacrosse team has six players on All-MIAA teams. Davio, Noordyke and sophomore Emily Cefaratti will join All-MIAA first team, and Forbes, Reed first-year student Madeline Baas will be on the All-MIAA second team.

Davio had a similar response to how she felt about being named an All-MIAA player:

“I’ve never felt the support and encouragement that I do from them from any other team I’ve been a part of and that is something I am truly grateful for. I couldn’t be more proud of [the team’s] accomplishments this season, and I can’t wait to see what next year brings.”