Class of 2015 votes Matthew Heun as Professor of the Year. 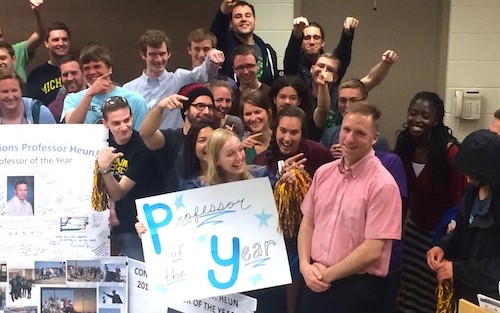 This year’s professor of the year award was given to engineering professor Matthew Heun, who was selected by the class of 2015 from a group of six finalists.

On Wednesday, May 6, students and faculty gathered to surprise Heun, who was in a meeting during chapel break, with the award.

The process of selecting the award begins with a group of seniors that collectively form the “professor of the year committee.” Led by K4L interns Aaron Burghgraef and Kayla Danahy, six seniors, Kristin Hossink, Madeline Koppendrayer, Charis Brown, Joel Altena, Laura Sterenberg and Alden Hartopo, collectively sorted through hundreds of nominations to select six finalists. The results were first submitted to the provost for approval before being sent out to seniors for voting.

Graduating from Calvin in 1989, Heun received an M.S. in Mechanical Engineering and a PhD from the University of Illinois. After completing his PhD, Heun also worked at NASA’s Jet Propulsion Laboratory in 1995 before coming to teach at Calvin in 2002.

For Heun, inspiration to teach engineering stretched over the span of time working as an engineer and throughout his time at Calvin.

“I was always ‘teaching’ at every stage of my education and professional life,” said Heun. “I thought it would be a good challenge to see if I could do it professionally. So, after nearly a decade working in engineering industry, I took the plunge to teach at Calvin.”

However teaching was never consistently a breeze for Heun, who felt continually challenged to stay ahead of his students.

“They are continually challenging me to be better at communicating and make course content relevant to their lives today, to their future careers and to the world at large,” said Heun.

For senior John Sherwood, Heun demonstrates a genuine passion in teaching while continually striving to cultivate his lecturing capacity.

“Professor Heun is always improving his lectures and finds new ways to explain difficult content,” said Sherwood. “He genuinely cares about every student, and it shows in and out of the classroom.”

Heun remains invested to his students both inside and outside the classroom, said Sherwood.

“Professor Heun has mentored me the past two years,” said Sherwood. “I have worked with him as a Calvin Energy Recovery Fund intern and he is the best supervisor I have ever had — always willing to help but never micromanaging and always open to input.”

For many engineering students, Heun is known for placing a heavy workload on his students, a trait that many of his students both appreciate and value.

“I’ll paraphrase professor Heun,” said Sherwood. “’I give you a lot of work because it’s good for you to struggle.’ His homework load is ridiculous, an interim course saw eight hours of homework a day, but through struggle comes growth.”

Senior Thane Symens echoed Sherwood’s sentiments, noting how Heun prepared him for success in the classroom.

“I never felt like I was unprepared for the homework,” said Symens. “He gave us all the tools we needed to complete it. He demanded a high quality of work from us and I think that really pushed us to be better students. We rise to the standards given to us, and he set the bar high.”

“In an academic sense he really pushes us to our limits,” added Symens. People tend to complain about the work load he gives us, myself included at times, but he has us do more than we thought we could and we’re ultimately better for it.”

Senior Joel Smith acknowledged that Heun was a different kind of professor.

“He is one of those rare teachers that gives you more work than you think you can ever handle and somehow, at the end of the semester, you end up not totally hating his guts,” said Smith.

“He doesn’t give up on us easily, which is great quality to have in an engineering professor and is part of the reason why I made it through the engineering curriculum.”

Many of Heun’s students especially appreciated his willingness to quickly respond to questions at any time.

“Professor Heun is great because he will answer any student homework question as an email to the whole class at any time of the day or night,” said senior Jonathan Crow.

Incorporating faith in academics and the workplace is an important aspect of teaching for Heun as he prepares his students for a post-graduate life.

“Participating in the maturation of students both as responsible kingdom citizens and as learners [brings me joy],” explained Heun. “It is an amazing joy to walk alongside students as they find their place in God’s world.”