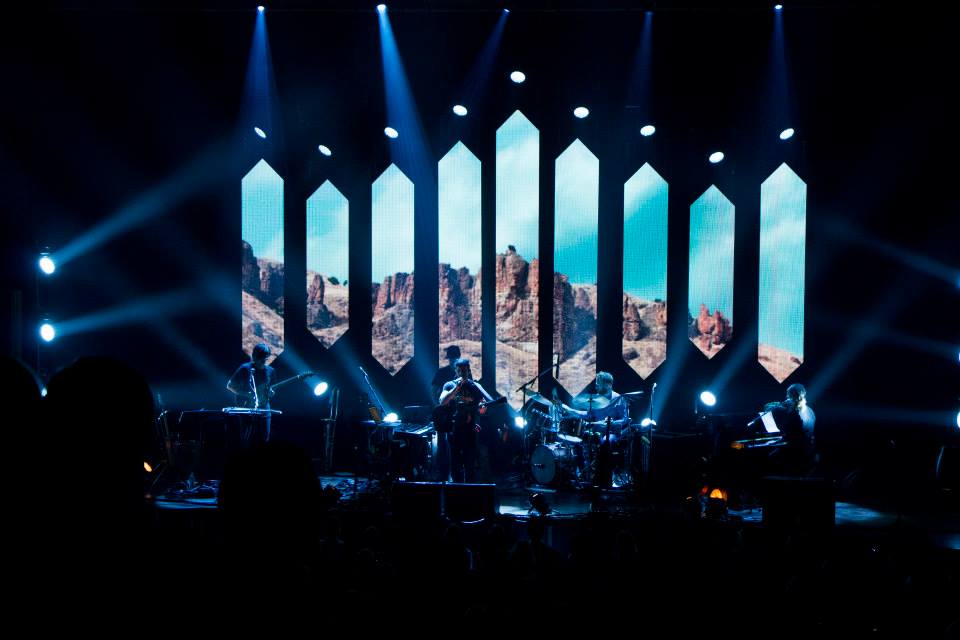 “It’s good to be back in the mother country,” Michigan native Sufjan Stevens quipped in the CFAC last Tuesday, performing at Calvin for the first time since 2007.

The Hope graduate shared with the sold-out audience how he used to pack into a car with his friends and drive the half-hour to Calvin to attend shows and other events here.

Now a veteran Calvin performer promoting his new album “Carrie & Lowell,” Stevens thanked Ken Heffner and the SAO for the work they have done for all these years: “Take care of him,” he told the audience full of Calvin students.

“Carrie & Lowell,” which was released in March, is one of Stevens’ most personal works, and his performance felt equally intimate. Stevens intentionally chose the smaller venue of the CFAC rather than the Hoogenboom, resulting in the public tickets selling out within minutes.

Understated and emotional one moment, theatrical and thrilling the next, the show captured the whirlwind of emotions of nostalgia and grief.

After a somber, seamless set of songs from “Carrie & Lowell,” Stevens transitioned into old favorites like “Chicago,” “To be Alone with You” and “John Wayne Gacy Jr.”

From the quiet, mournful “No Shade in the Shadow of the Cross,” to the brilliant instrumental light show that accompanied “Blue Bucket of Gold,” Stevens showed himself to be a master of the slow rise and fall, taking advantage of quiet moments as much as the instrumental swells.

The crowd was transfixed by both the music and the visuals of the concert.

Home videos and tranquil nature scenes were projected on a series of pillar-shaped screens, and a hypnotic light sequence of disco balls and searchlights alternately blinded and singled out people in the audience, pulling them into the music.

Montreal-based Little Scream opened the show with a set of folk and electronic music.  Talking her way through some technological hiccups, lead singer Laurel Sprengelmeyer was a charming front for the band’s ethereal harmonies.

“I think the show was a tremendous success,” said John “Moose”  Williamson, the research and program coordinator for Campus Involvement and Leadership.

Stevens’ seven-year absence from Calvin College has not decreased the enthusiasm of his Calvin fans. Junior Kendra Kamp was “very impressed with the show.”

She said, “It really gave me a new perspective on his music, it being the first time I’ve seen him live. This really transcended the music for me.”

Williamson agreed: Sufjan Stevens is “an incredible example of what it means to be a Christian artist not operating within the restrictions of Christian music,” he said. “It was a perfect example of the kind of experience we want to bring to Calvin students.”