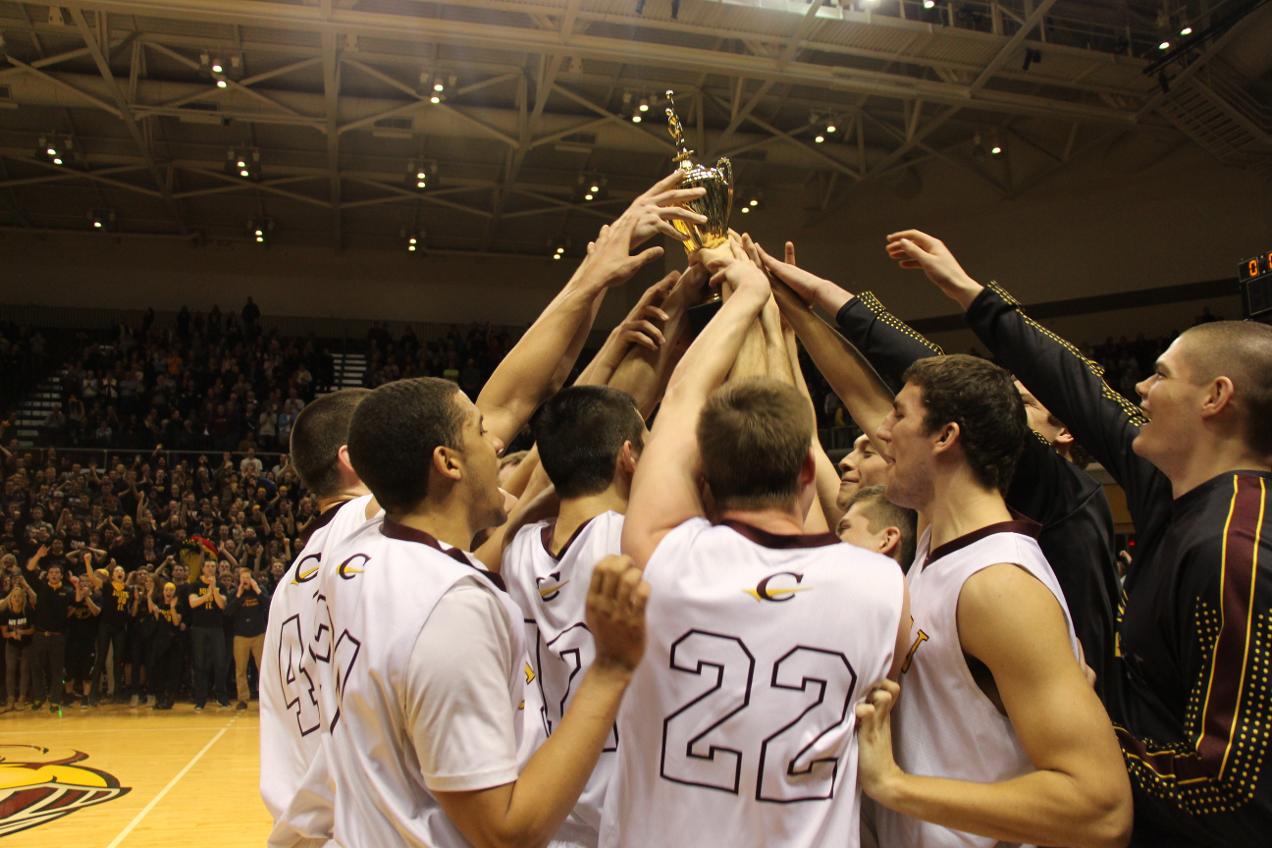 Last weekend both men’s and women’s basketball came out on top of rival Hope College in the MIAA Tournament championship. The victories secured automatic qualifiers to the NCAA tournament. Calvin women will host the regional games while the men will be travelling to Mount Union College in Ohio.

Both programs had remarkable results on Saturday. Sixth ranked Calvin women capped off an undefeated regular season at 27-0 for the first time in school history. They won 77-73 and only trailed for the first 19 seconds of the game.

Calvin men went on a 14-2 run at the end of the game to come back and win. Unlike the women, the men only led for five seconds. Senior Jordan Brink hit a jump shot to put the Knights ahead 70-69 and the defense was able to force a turnover to secure the weekend.

The women were up first on Saturday.

Hope’s Autumn Anderson finished the game with a buzzer beating layup, but the Calvin Knights weren’t worried about the defense at that point, with the bench yelling, “Don’t foul!” Moments before, sophomore Anna Timmer had essentially locked the game away by sinking two free throws with two seconds left, making it a two possession game.

Seniors Hannah Acre, Kayla Engelhard and Breanna Verkaik contributed a combined 39 points to the winning cause. Breanna Verkaik led the way for all scorers with 21 points, including an early layup that pushed her over 1,000 career points.

“It was a big day,” Verkaik said before shifting the focus to her team. “I’m so excited to see what this team can do. We have been playing with so much heart and it’s been so much fun.” Verkaik was later named the MIAA Women’s Basketball MVP by a poll of the coaches.

Head coach John Ross complimented Breanna Verkaik as well as her sister Kally Verkaik for their hard work in practice and character off the court. Kally Verkaik also had a big day, scoring 10 points-five from the freethrow line-getting nine rebounds, five assists, five steals and three blocks. Kally Verkaik reflected on her effort saying, “I just played the hardest I could for my teammates.”

When it came to the keys to success for the Knights, Breanna Verkaik said the team’s passing was really good and Acre mentioned the communication between players and their focus at the free throw line.

Engelhard, who also entered the 1,000 point club earlier this year, was named to the All-MIAA first team alongside Breanna Verkaik. Both players won for the second time.

With the win, the Knights improved to 27-0. They await their first game of the NCAA DIII Regional Tournament this Friday at 7:30 p.m. The Knights learned on Monday that they would host the Baldwin Wallace Yellow Jackets whom they have faced twice before in tournament play. They came out victorious both times.

Van Noord Arena will also host the UW-Oshkosh and North Central game before Calvin. The winners of the two games will then play on Saturday at 7:30 p.m. The Final Four will also meet in the Van Noord.

The men’s basketball finished the night with a thriller.

Early in the match, Calvin fell behind by double digits against the Flying Dutchmen. It was not until senior Jordan Brink scored two free throws did the Knights get onto the scoreboard. Calvin trailed behind Hope for the entire first half, and halftime ended in Hope’s favor 39-24.

“It was a typical Calvin-Hope game. Both teams are equally matched,” coach Vande Streek said. “Hope got off to a good start and that’s where they stayed most of the game.”

Brink hit two three-pointers in a row enabling the Knights to go on a 9-0 run, which brought the score to 67-65. With less than two minutes in the game, senior TJ Huizenga had an offensive rebound, drew a foul and made the free throw.

With 18 seconds to go, Brink was able to sink a shot from the right elbow bringing the Knights their first lead of the game 70-69. Only five seconds remained when Calvin forced a turnover on Hope’s last chance at a basket, thus bringing a tough fight to an end with a one-point victory for the Knights.

Brink had 25 points in the game, which also means that he is now eighth on the Calvin career-scoring list.

After the Knights defeated the Flying Dutchmen, fans — mostly Calvin students — stormed the court. However, what was supposed to a fun celebration turned into a dangerous and scary situation. Hope’s Ben Gardner and Calvin forward Tyler Dykstra got trapped in the middle of the chaos. Gardner emerged from under the crowd about 10 seconds after he was pushed over.

“I got pushed over, too, right next to Gardner and we were just kind of laying on the ground and people just kept falling on us,” said Calvin forward Tyler Dykstra in an interview quoted from an mlive.com article.

According to the article, there were not any punches thrown and no one was hurt. As a result of the event, security at future regular season Calvin-Hope games will be increased, said Jim Timmer, Calvin’s athletic director.

On Monday night, it was announced that the men’s basketball team will be headed to the University of Mount Union College in Ohio for the first round of the NCAA III tournament game. The team will take on Oswego State of New York (19-9) on March 6 at 5:30 p.m. This will be the first time the two teams will be going up against each other in men’s basketball history.

“It’s always fun in the NCAA tournament to play teams that you have not played before—or have done so infrequently. We’re looking forward to the challenge,” Vande Streek said.