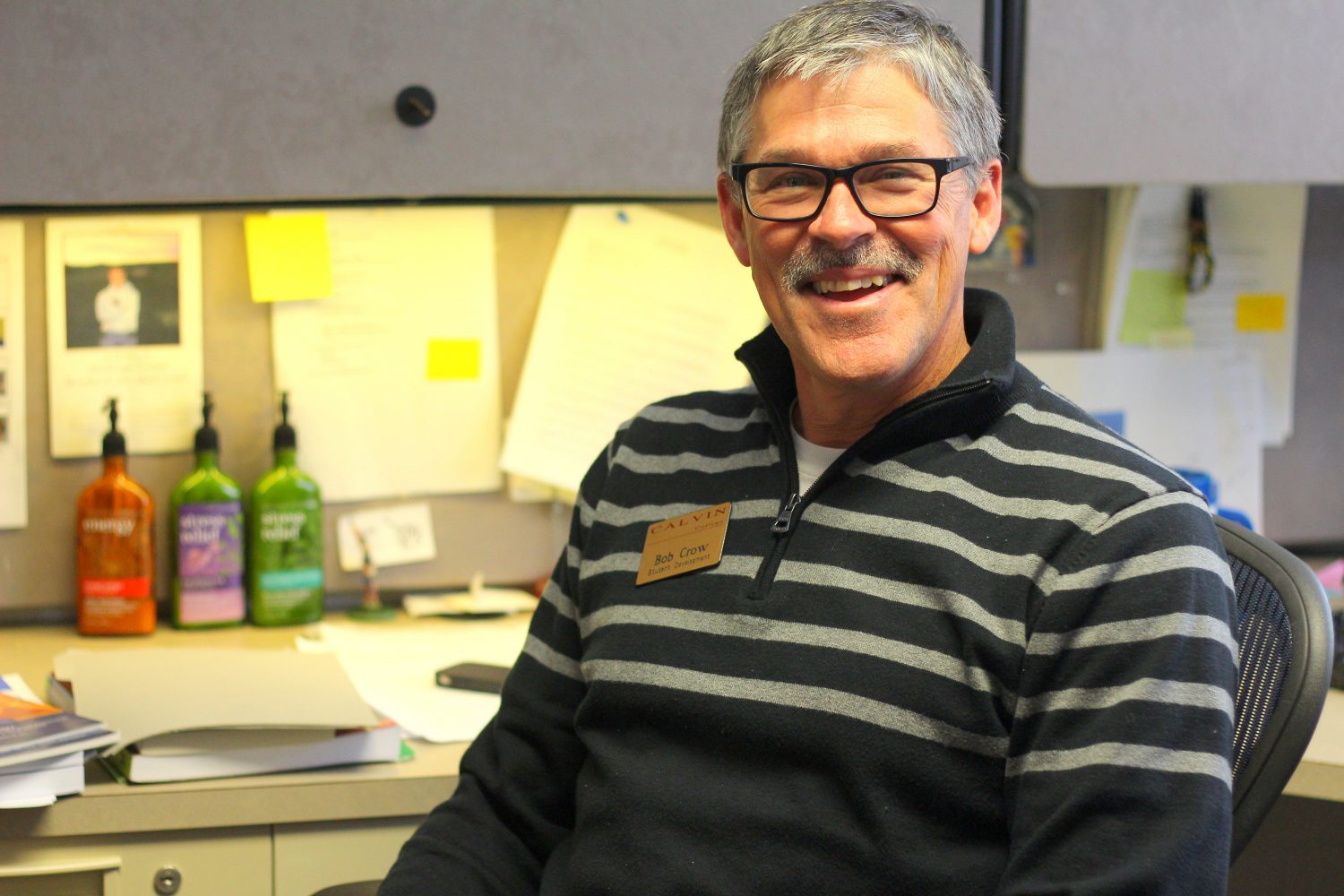 Bob Crow has been in administration at Calvin for over 17 years. Between making his own ice cream, roasting his own coffee beans and collecting scented hand lotions (a selection of which he always keeps in his office), he is works closely with upperclassmen and other learning communities. Chimes sat down to ask him about the work he does every week.

Chimes: You are currently the dean of student development. What has the journey here been like?

Crow: Well, my first introduction to working at Calvin was when I finished my master’s degree back in 1987. I didn’t know anything about Calvin. I’m not from Michigan; I’m not from the Christian Reformed Church, but I applied for a position here and became a resident director. For two years I was in Rooks-VanDellen, and I loved it. After two years I took another position at Malone University in Canton, Ohio. I was there for nine years, then came back here in 1998, and I’ve been in this same position ever since.

Chimes: So what all does ‘dean of student development’ encompass?

Crow: I work with off-campus students, our orientation programs and assessment in student life. That last one is a bit new for me, but we think about how our work in student life is in alignment with the whole institution and how we know that we’re delivering what we say we will. Recently I’ve been very involved in selecting the alliance housing program which is for upper-class student athletes or those wanting to live an active lifestyle in an intentional Christian community. I also work with our adult learner population and a little bit with graduate students.

Chimes: What does a typical week look like for you?

Crow: [laughs] There’s no such thing as a typical week. That’s what I like about working in higher ed because you can’t get bored. Students bring life; there are issues on college campuses that you need to talk about and work out — you just never get it figured out and put it neatly into a compartment, you know?

Chimes: If you could sit down and have lunch with every upperclassman, what would you want them to know?

Crow: When I think of upperclassmen, I think off campus. I would say get to know your neighbors and really think about what it means to know your neighbor as yourself. Some students have lived in those neighborhoods for six months, compared to others who have lived there for over 30 years. These people care about the way their yard is manicured and leaves are cared for and that the sidewalk is shoveled in the winter and where the cars are parked. They care if the screens are out of their windows or what’s left on the front porch. Students maybe haven’t thought about that yet.

I have had people in the neighborhood say, “If you ever need rakes or shovels, come, we’ll let you borrow ours.” There are 150 students who live in those streets, but I bet most of them don’t have shovels or rakes or lawn mowers, they’re not quite sure how the recycling program works, or they don’t think about the fact that if all of them park on the street instead of the driveway, the streets shrink. Snowplows and emergency vehicles can’t get through it. There was a fire truck that couldn’t get down a street where a number of our students live. That’s what it takes to live in a neighborhood — to think about the implications your behavior has on others.

Chimes: What is your favorite Calvin tradition?

Crow: I think the sem pond jump might be one. I think it’s a pretty cool and unique tradition. I think the Calvin-Hope rivalry is a good one. This might sound strange, but I like opening convocation and Regathering.

This interview has been condensed and edited