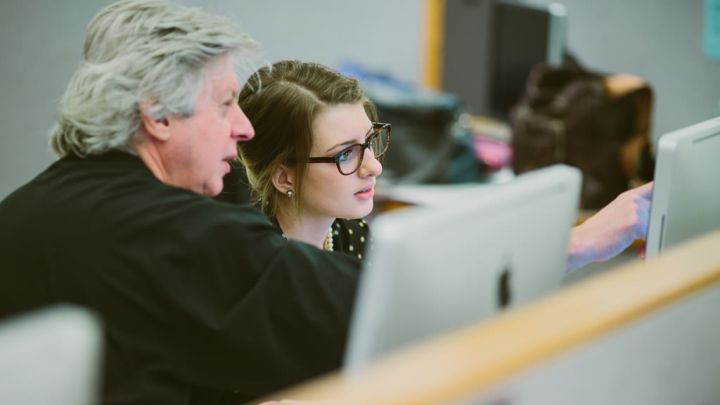 Historically, Calvin’s Art Department has not necessarily been the harbinger of academic innovation. But this year professor Franklin Speyers is moving to change that trend. Now in his 27th year of teaching at Calvin, Speyers is expanding the department by offering a major in graphic design.

Speyers said graphic design is changing the name of the game for the arts and art majors.

According to Speyers, Calvin’s addition of the graphic design major arrives in the midst of rising demand for the major nationwide. But because other colleges have offered these sorts of programs for years, Speyers says Calvin is late to the game:

“Even out in the corn fields of Iowa, they have more graphic design courses than we do,” Speyers said, laughing.

Because of graphic design’s growing prevalence and influence in an increasingly image-driven world, Speyers believes that offering these programs could mean a lot for Calvin and its mission.

“If you send out students who are really literate, who understand the power of images and how they work and how they can be influential, you can take the message of Calvin and you can spread it.”

While the official graphic design major is an art department innovation, its classes have been part of the art department for years. However,  they have evolved significantly over the years as the technology of design developed and became more readily available.

“We started out in the basement of the library because the cost of Macs in 1990 was outrageously expensive,” said Speyers. “In 1988 I priced out one Mac Fx computer, a scanner and a printer. The total cost was $30,000… amazing how swiftly we have leap-frogged over that technology. Calvin is now able to equip an entire Mac classroom of iMacs for less than half of what one station cost 27 years ago.”

According to Speyers, gaining support for the curriculum was, in some ways, a struggle. In the current economy, fine art courses do not gather a lot of support in higher academia because, when compared to other majors, they are not as readily-applicable to jobs.

But Speyers has advocated that graphic design exists outside of fine art; it is more about responding to the needs of others than channeling one’s own personal muse, it is a refined skill, and it is directly related to plenty of jobs. Speyers said that academia often sees it as “commercial art,” sometimes even reducing it to mere software education. Speyers disagrees.

“There is the illusion now that everyone is a designer,” said Speyers, “because the computer has democratized design, just like the instamatic camera democratized photography.”

“Software literacy does not make for a designer, and that’s the mistake that most people make today.”

In fact, Speyers does not even teach software in his classroom anymore. He thinks that learning software en masse is inefficient, takes too long and is a poor use of students’ time.

“I used to teach it all,” he said, gesturing to a decades’ worth of Illustrator and Photoshop manuals on his shelves. “‘Click here, do this. Click here ,do that.’ And then I began to realize that students don’t all learn at the same rate.”

Speyers now saves hours of class time by teaching software education through a site called lynda.com, where students can go through video tutorials on their own time and at their own pace.

Before now, Calvin students who had a greater interest in graphic design had to pursue it by other means.

“For 27 years I have hooked up business courses with graphic courses and created an interdisciplinary major. Every time a student expressed interest we would have to recreate the same rubric again and again.”

Now, students can follow a regular, itemized program of study, though it still involves a lot of business classes. Speyers said Calvin’s program combines art and business in a way not matched by other colleges, and that the major’s four required business classes are a result of design’s increasing importance in modern commerce and advertising.

“The graphic design major was made possible because the business department understood how many financial transactions are made increasingly based on images. … Graphic design and modern media are siamese twins… Modern media could not exist without graphic design. Look at the opening credits of NBC, CBS and ABC news. All their brand identities lie in graphic formulations.”

With his extensive professional experience in the field, Speyers understands this relationship better than most. A 1971 Calvin graduate, he received his masters of science from Pratt Institute in New York City, sometimes called the “Harvard of Art Schools.”

“I wanted to learn from the industry leaders,” he said. “All of our classes were taught by practicing professionals.”

Speyers went on to do graduate studies at (the actual) Harvard’s Graduate School of Design, where he collaborated with Italian designer Massimo Vignelli to create new teaching methods. This led to the publication of the Vignelli Canon (available for free online), which Speyers still uses as the framework for his courses.

As a professional, Speyers’ vast portfolio includes organizations such as the American Bankers Association, the Marriott Corporation, Habitat for Humanity, Brookings Institution and the Grand Rapids Symphony.

Speyers strongly believes in bringing a professional element into the classroom. The third level class, Brand Design, has students designing for professional businesses and organizations. He believes this gives students the competitive edge of experience, networking and an expanded design portfolio.

In the past, his students have done design and branding work for clients, such as the DeVos Center, the local American Red Cross, Health Intervention Services, the GRAM, Grand Rapids Ballet Company and Steelcase. The current class’ work with West Michigan manufacturer Herman Miller includes contact with the company’s own design firm and a non-disclosure agreement.

“This is probably the most realistic we’ve ever been,” said Speyers.

“The breadth of Calvin’s Christian liberal arts education equips our students better than anything any secular art college can. Graphic Designers draw on all of life, and life cannot be spoken of apart from faith.”

Speyers believes that it is essential that Calvin, and Christians in general, be involved in this field because designers are the “world-shapers” of tomorrow.

“Calvin, like most academic institutions of higher learning, is generally textually driven. Outside of academia, however, our culture is largely image driven. This is why we genuinely need graduates who want to work redemptively with images and resist the presuppositions of Madison Avenue that view people as mere commodities and not as Imago Dei.”