Men’s Hockey team off to Playoffs 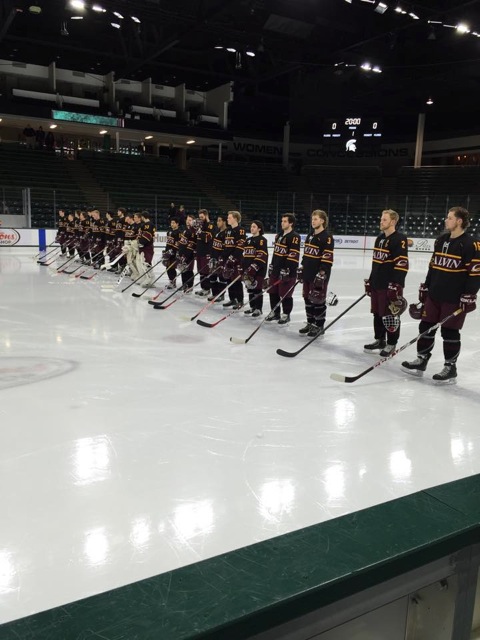 The Calvin men’s hockey team has a current overall record of 18-7-1. They played two games this past weekend, both against Aquinas College. Although they suffered a loss of 3-2 on Friday, the team came back for the last home game of the regular season as well as senior night on Saturday, earning a 4-0 win.

“We played really well on Friday, but Aquinas’ goalie played better. We finished the game with 50 shots, where Aquinas only had 17,” senior Brent Harris stated. Other than that, Harris said that the two games were very similar to one another in terms of effort and play.

“Aquinas capitalized on a couple power play opportunities which led to their victory. On Saturday, we picked up our penalty kill and capitalized on our opportunities. Friday night, we outplayed our opponents about as much as I’ve ever seen, but somehow we didn’t come away with a victory,” said Harris.

“Saturday we buckled down and made fewer mistakes and capitalized more on our opportunity. That was the difference. It is a great last game to send us into our league playoffs and regionals,” Szenderski said.

The Knights have finished in 3rd place in the Michigan Collegiate Hockey Conference (MCHC) League and are off to the MCHC league tournament this weekend. They will then have the regional tournament the following weekend, which then leads to the national tournament.

The coaching staff not only works hard to make sure the guys play well together, but they also make it a point to focus on individual players. The coaches “develop us players individually without weaknesses and strengths, [and] also interweave us to work together and efficiently like a machine,” Szenderski said.

Not only are there good team dynamics, but the men also are conditioned to their prime, so that will be their biggest asset going into the playoffs.

“Our biggest asset during playoffs will be our team depth and endurance. We are a fit team, and most teams cannot handle us come the third period,” Harris comments.

The Knights are projected to perform well in the coming tournaments. Their next game on Friday is against Adrian College Black, who put up double digits against the Knights the last time the two teams met.

“Our team is right where we should be. We are moving the puck well, taking good shots and playing a great offensive and defensive game. I am confident that good things are going to happen for Calvin Hockey in the next few weeks,” Harris concluded.

The next hockey game is scheduled for this coming Friday, Feb. 13, at 7:30 P.M. at Southside Ice Arena.