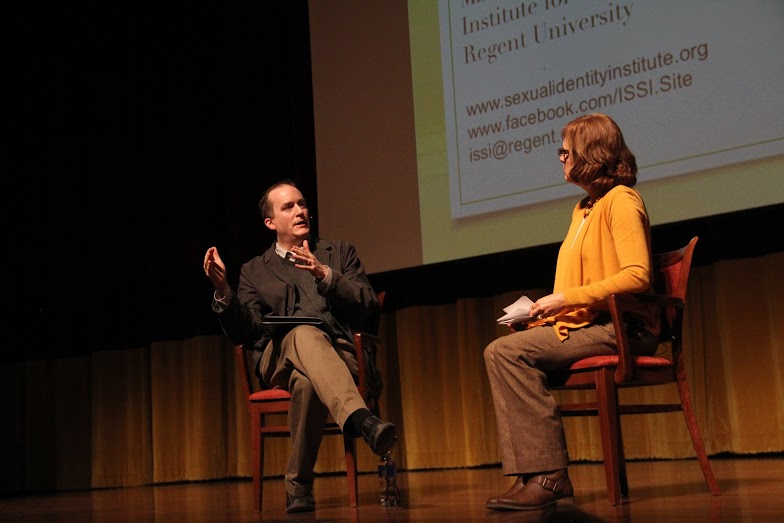 Last Thursday, the Sexuality Series presented a talk by Mark Yarhouse called “Understanding Gender Dysphoria.” Yarhouse, a Calvin alumnus and director of Regent University’s Institute for the Study of Sexual Identity, spoke about the experience of gender dysphoria and how it relates to Christians and the church. He defined gender dysphoria as, “the experience of distress related to having a psychological and emotional gender identity that does not match one’s biological/birth sex.”

Julia Smith, director of the Sexuality Series, was excited to have Yarhouse come to Calvin. “This is such a great opportunity for us in the Calvin community to listen and learn, for the safety of our transgender students,” she said.

Yarhouse pointed out in his presentation that the church’s position in topics related to sexuality often leads to “culture wars.”

“People dig in their heels,” he said. “But the Christian community can’t afford to take that posture. We need to rise above cultural wars and think deeply.” Yarhouse referenced Leelah Alcorn, a transgender teen raised in a conservative Christian home who made national headlines when she took her own life last December.

“No matter where you stand,” Yarhouse said, “we can agree this is a tragic loss of life.”

Yarhouse stressed how important it is for Christians not to use isolating language. Instead, we should think of LGBT believers as part of our community. “These are our people,” he said, “so to talk about them [like they’re] different keeps them at arm’s length and shifts the responsibility away from the body of Christ.”

Yarhouse defined terms such as gender, sex, genderqueer and intersex, discussing how common gender dysphoria is and how different people respond to it.

Yarhouse made a point that not everyone who experiences continuing gender dysphoria chooses to undergo transition therapy so their biological sex matches their gender identity. Some resolve to accept their biological sex, while others cross-dress intermittently or adopt cross-gender roles that don’t involve treatment. Transitioning treatment can be frustrating, Yarhouse said, and he estimated that 50 percent of people drop out of the process.

“In all of these cases, the family would need tremendous social support,” Yarhouse said. “[Gender dysphoria] is the kind of experience that leads to great shame for people. Being able to address that as a faith community would be tremendously helpful.”

Yarhouse said that the church often fails to provide this support. He recalls meeting a “16-year-old biological female who presented as male.” When the student was brought in to Yarhouse’s practice to speak with him, he learned that the family’s church taught that cross-gender identification was “willful disobedience.”

“This is what the people shepherding them said,” he said. “That is not good pastoral care.” He said he was the first person to tell the student, “I don’t think you choose to experience your gender dysphoria.”

As he discussed the way that people in the church view gender dysphoria, Yarhouse outlined the three basic viewpoints through which people see the issue. Many conservatives, he said, come from the “integrity” viewpoint, seeing gender dysphoric people as violating the sacred integrity of male and female as God created them. Others, Yarhouse said, see dysphoria as a “disability” to be addressed with compassion.

The third framework is what Yarhouse says most LGBT people see from — the “diversity” framework, which says that sexual minorities have an identity that is to be celebrated as an expression of diversity.

Regarding the church’s actions in helping people who experience gender dysphoria, Yarhouse had a few suggestions. “Do not minister out of rigid gender stereotypes,” he said, adding, “I want to try to create redemptive space for people who are trying to follow Christ and navigating gender dysphoria.”

During a Q&A portion, an audience member asked Yarhouse what he would say to someone experiencing gender dysphoria who has rejected the church because the church rejected them. He said he would bear God’s name to them, loving them differently than others had.

Annaka Scheeres, a junior advisor to the Sexuality Series, appreciated Yarhouse’s talk. “I thought it was a good introduction to the transgender conversation,” she said. “It was helping us understand different lenses and the values of these different perspectives, even if we don’t necessarily agree.”

Nicole France-Coe attended the talk because, being married to a dorm resident director, she interacts with many students.

“I feel like I want to love people, and this is a topic I don’t have a vocabulary for,” she said. “It allows me to understand where different types of people are coming from.”

France-Coe especially appreciated what Yarhouse said about showing others the love of God. “He talked about how we bear Christ’s name to others — I feel like that was his message. But it was very educated at the same time,” she said. “I liked that.”

“It’s really important for us all to become conversant with these terms,” said Smith, “and to understand, as Mark said — you can’t say there’s one experience of being transgender.”

“We have to lead with love, patience and listening,” she continued. “We still have so many questions — that’s an indication of how we need to continue.”