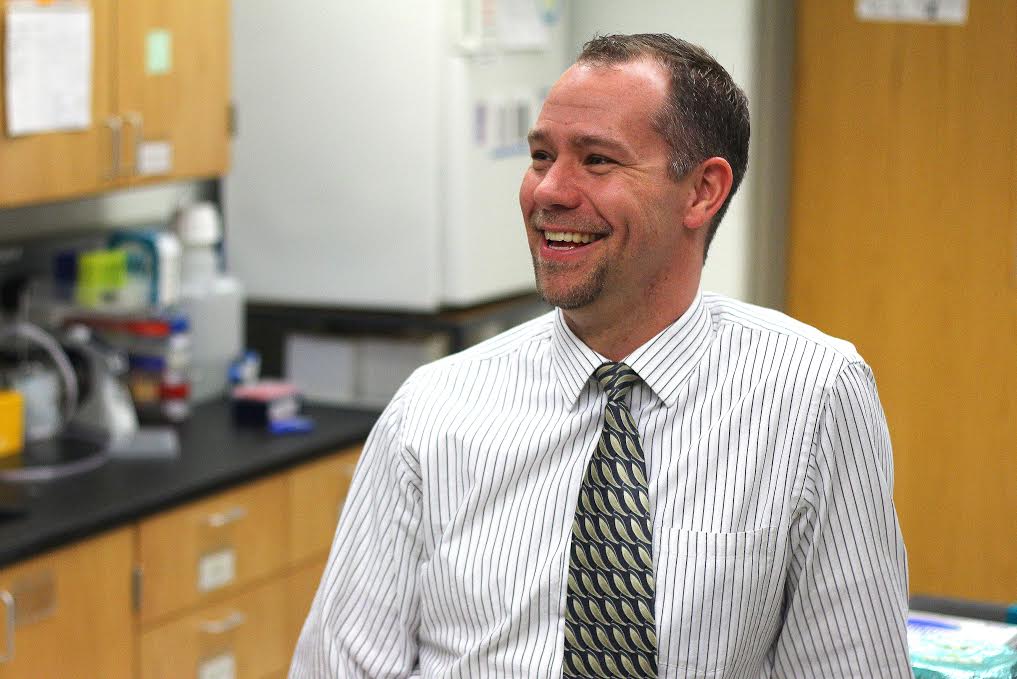 By now, it comes as no surprise to learn that another faculty member of the Calvin science department has received a grant to conduct research.

Biochemistry professor Brendan Looyenga recently received a three-year, $295,939 research grant from the National Institutes of Health, specifically the National Cancer Institute, making him the fourth member of the chemistry and biology departments to be conducting research simultaneously on this type of grant.

Looyenga’s area of interest, broadly speaking, is the connection between neurodegenerative diseases (like Parkinson’s) and cancer. These diseases are typically thought of as opposites because individuals with Parkinson’s lose important cells in their brains, whereas cancer patients experience unwanted cells multiplying out of control.

“Understanding those unusual circumstances where a single mutation to a single gene can put you at a higher risk for both diseases is a fascinating question to me,” explained Looyenga. “This grant is really focused on the cancer aspect [of that question.]”

Looyenga, along with undergraduate student researchers, is studying a specific gene called LRRK2 that has been linked to a high risk of Parkinson’s disease and also to certain types of cancer.

In explaining the function of LRRK2 within a cell, Looyenga drew a comparison to the distribution aspect of the postal service:

“When things are taken into the cell, the cell has a very efficient system of sorting where these things need to go in order to end up in the right place to be utilized appropriately by the cell. And one of the things that’s important is taking molecules that play a role in signaling communication on the outside of the cell, pulling them in and then sending them to the right place.”

LRRK2 plays a role in this sorting process, and if it is missing or hyperactive, that causes problems in this sorting and distribution system. Looyenga believes that this could play a role in cancer because incorrect sorting of growth factor receptors leads to abnormal growth patterns in a cell.

“Our hypothesis is that defects in the sorting of a specific growth factor receptor (MET) is what’s going wrong in a certain kind of kidney cancer called papillary renal cell carcinoma,” he said.

Not only does Looyenga now have the funding to pursue this research, but this provides opportunities for students in the Calvin science department as well.

“I plan to have student involvement through this entire three-year process,” said Looyenga. Right now, he has three students working with him on different parts of the research. These students will help with research during the school year and the summer, and they will also have the opportunity write parts of the papers and be credited as authors.

Looyenga credits the culture of the chemistry and biochemistry departments at Calvin as a main reason that many professors have successfully received grants within the past few years.

“One reason Calvin has been so successful [in getting grants] is because of the collegiality and collaborative environment that we have here. We’re quick to help each other when it comes to reviewing a grant before we send it out, so it’s a good product.”

And though Looyenga is clearly passionate about his work and research, that’s not the only thing he hopes to impart to his students. He emphasized that the perspective of a Reformed Christian education is something he hopes all his students come away with.

“[I hope] they’re able to not just say ‘I understand this,’ but to also put it into a larger perspective of Kingdom work.”