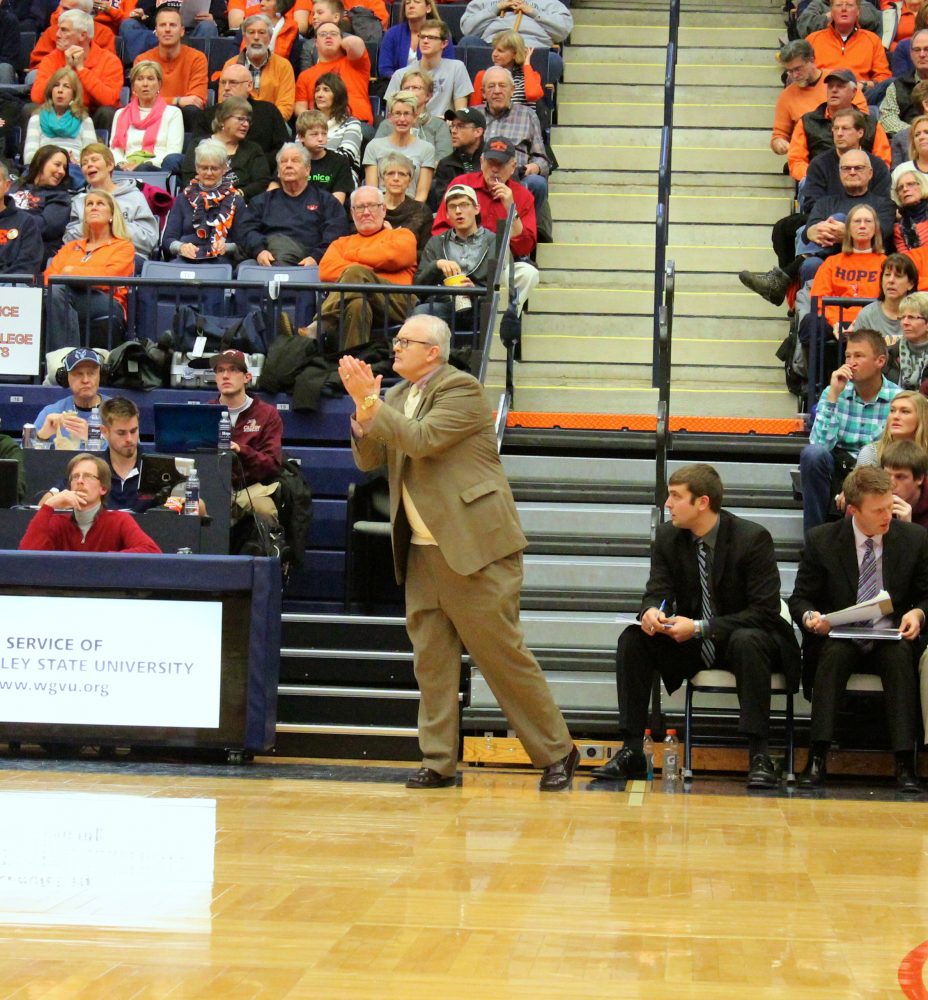 “I’ve absolutely loved [coaching],” VandeStreek said. “When I went to college, I had no idea what I wanted to do. When I ran onto the court for the first time as a player, I said, ‘This is what I want to do.’ I feel very blessed that God’s given me the opportunity to be a college coach.”

Since coming to coach at Calvin, VandeStreek has been very successful. His first season at Calvin, he coached the team to a 17-8 overall record and landed them a second place finish in the MIAA with a 10-2 conference mark.

During the 1998-1999 season, VandeStreek was able to celebrate the Knight’s first MIAA title in 1994, and the following year, he led the team to winning the national championship game.

When asked what success as a coach means to him, VandeStreek kept it humble by stating, “You know, I suppose when I was younger I thought more of the wins and losses than I do now.

I mean, believe me, I’m as competitive as I’ve always been, but I don’t really measure success by [wins and losses],” said VandeStreek. “I would measure success [by] ‘did this team become as good as they could’ve been?’ I think success for me is positive team chemistry. I think it’s being able to relate and mentor and advise guys in life and all those kinds of things.”

VandeStreek was the point guard for the men’s varsity basketball team at Dordt College in Sioux Center, Iowa. As a senior in 1980-1981, he led Dordt in assists and free throw percentages. His team went on to complete their best season yet with a record of 18-8.

VandeStreek’s coaching style is a mix between old school and a more modern type of style.

“I think what one of the things a coach brings, to a coach or group is accountability. I’m a big believer in team chemistry, but in order to have that, that doesn’t mean everyone can do whatever he feels like. Everyone has to make sacrifices. Everyone has a role to play,” VandeStreek said.

Coach Vande Streek also has bi-weekly individual meetings with his players all season in order to build a better relationship with each of them.

VandeStreek has been a part of Christian education his whole life and believes that the mission for all of those schools is the same: “preparing young people to serve the kingdom of God.”

“I think that it happens in dorm life, it happens in classrooms, it happens in trips and any kind of extracurricular,” he said. “So I just kind of look and say, ‘OK, how can I help?’ I like to say that Calvin is trying to help people become who God wants them to be, not just what,” VandeStreek said. “I think that’s where basketball comes [in]. We’re trying to win games, no question, but it’s so much more than that. I’m just trying to be a part of that mission.”