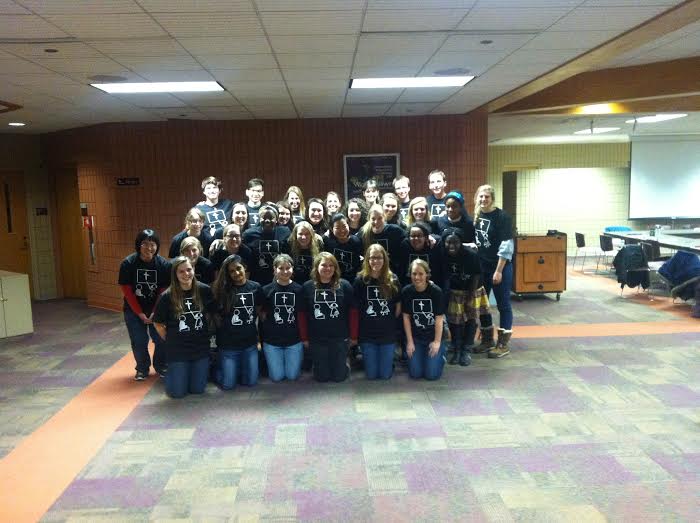 Committee members and volunteers prepare for the 2015 conference. Photo by Abby Paternoster.

“What began as a seemingly impossible idea by a Calvin senior is now days away from becoming a reality,” Chimes staff writer Nana Yaa Dodi wrote in 2006, the weekend of Calvin’s first Faith and International Development Conference (FIDC).

The “impossible idea,” that of a student-led conference exploring international development from the viewpoint of practitioners, occurred to then-junior Jackie Bilts (now Bouvette) and recent graduate David Beversluis on their way back from a similar conference at Wheaton. “We could do that,” they said to each other.

Professor Roland Hoksbergen remembers the two of them coming to his office with their big idea. “Basically, I said, ‘No, don’t do this,’” he recalled. “One, the conference you’re proposing is a big undertaking, and two, you’re going to get involved in the stresses of the semester and you’re going to let it drop. You have to think about whether you really want to do this because it’s a big deal.”

Ten years later, Jackie Bouvette doesn’t remember his hesitance. “He probably did try to talk us out of it, but by then, I was already on a roll,” she laughed. “It would have gone in one ear and out the other.”

When he saw how dedicated Bouvette and Beversluis were, Hoksbergen put all his energy into helping them piece the conference together from almost nothing. “If they are willing to put that type of energy in, having heard that it is a major undertaking, then as a faithful faculty member I have to take that risk,” he remembers thinking. “So I said, ‘OK, let’s do it.’”

“Roland has been so instrumental throughout the 10 years,” Bouvette said, looking back. “I really don’t think the conference would have happened without him. Even though it was a student initiative, you had to have that professor who believed in the students. He was just a great person to collaborate with and brainstorm with.”

After months of planning, the first conference drew around 350 students from across the United States and Canada. David Beckman, president of the advocacy organization Bread for the World, was the first plenary speaker. By all accounts, the event was a success.

“It was amazing,” said Bouvette. “In your mind you hope that it’s going to be successful, but then when everyone shows up … the way they embraced the conference and the ideas, they were just fully on board with us.”

Though she remembers most of the first conference as a blur, rushing between sessions ensuring everyone was in their place, one moment stands out for Bouvette:

“The conference was my Calvin experience in a lot of ways. I really believe that was one of the main reasons that I was at Calvin,” said Bouvette. “This was never about my agenda or about something I could do. This was just about me being in the right place at the right time.”

The next year, the conference was under new leadership, but much of the groundwork was already laid, and they had established a strong reputation with sponsoring organizations. Then-first-year student Elise Ditta volunteered part of her afternoons to direct visiting students but didn’t attend the conference: “I would love to go, but three days of not doing homework was more than I could handle responsibly,” she told Chimes in 2007.

Over the next few years, her opinion changed, and by 2009 she was acting as the general assistant for the conference. It was at the conference, in a breakout session, that she first heard from Mennonite Central Committee (MCC), a development organization that sends out workers around the world. After graduation, Ditta went through MCC to work in Honduras with the Association for a More Just Society. “It was a connection that I first made at the FIDC,” she said.

Now, nine years after first volunteering for the conference, Ditta has come full-circle, and will return to present her own breakout session for MCC at the conference.

Her thinking has come a long way, too. Now pursuing a masters degree in peace studies at Notre Dame after years of working in the development field, she says relationships are more important than homework.

“There’s something to be said for homework and book learning,” said Ditta. “But it’s also really important to make connections in your field. This is a really easy way to make those connections: it’s right here on campus.”

Ten years ago, Bouvette told Calvin News and Stories: “I’m excited for the feedback we’re going to get. This is planting seeds that [we] may never see grow.”

But now, as the number of unique registrants to the FIDC tips past 3,000, Bouvette will see some of those seeds sprout and flower. This year, Bouvette will return to introduce the 10th-anniversary conference, speaking in front of another generation of students interested and passionate about development and global justice.